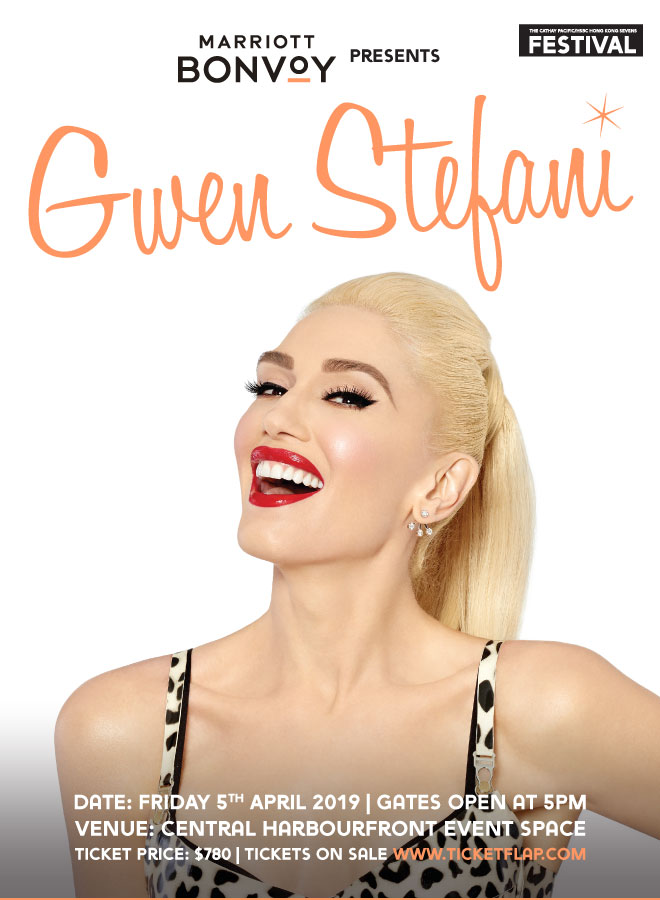 Known for their energetic and powerful performances, Supper Moment is one of the most popular Cantonese pop-rock bands in Hong Kong.

Since forming in 2006, the quartet has released a string of Hong Kong chart topping hits and has been no stranger to the city’s stage, having played to packed houses at renowned venues both in Hong Kong and abroad.

The concert will headline the activities as part of the 2019 Cathay Pacific/HSBC Hong Kong Sevens Festival.

Trendsetter Stefani has achieved worldwide success as a performer, songwriter, and recording artist who has sold more than 30 million albums worldwide with No Doubt and as a multi-platinum solo artist.

In 2016, Stefani released her critically praised third album This Is What The Truth Feels Like which debuted at #1 on the Billboard Top 200 and featured the No. 1 single “Used To Love You.” This Is What The Truth Feels Like followed her other solo albums — Love.Angel.Music.Baby and The Sweet Escape - which featured the hit singles “Rich Girl,” “Sweet Escape,” “What Are You Waiting For?” and the Pharrell Williams-produced No. 1 hit “Hollaback Girl.”

Running across the three days of this year’s tournament (April 5-7), the Cathay Pacific/HSBC Hong Kong Sevens Festival extends the atmosphere of the rugby revelry and entertainment to the streets of Hong Kong.

The 2019 edition will incorporate the city’s Central Harbourfront event space, with the venue hosting Stefani on April 5 before transforming into ‘Sevens Central’ for Saturday, April 6 and Sunday, April 7, a fanzone featuring live music, entertainers, the rugby action on big screen and free entry