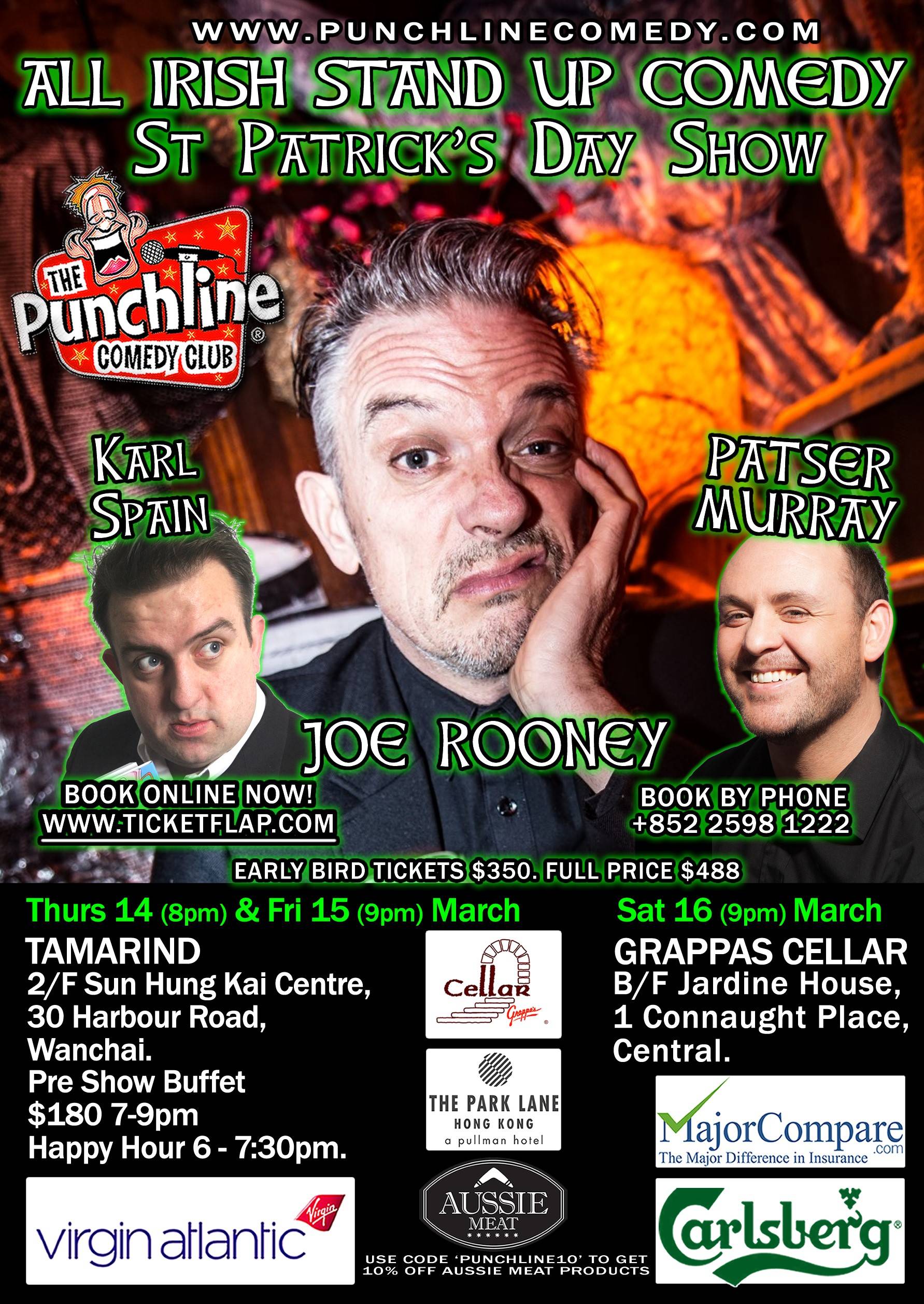 Every year in March Punchline brings THREE fantastic comedians DIRECT from Ireland to help celebrate the St.Patrick Day festivities! Its always a sellout and judging from the Three star comedians coming from Ireland this time round its going to be a great night of laughs and singing, again! It sells out every year so please book early! Your comedians in March 2019:

Joe Rooney:
Many people in Ireland know Joe Rooney! He has performed his show A Holy Terror at the 2018 Edinburgh Fringe Festival amassing wonderful reviews “The stand up was intelligent and topical and insightful and the music/songs were great fun - we've had them stuck in our heads ever since!” Edfringe.  He was voted Best Comedian 2017 at the Pure M Awards. He has been a headline act in venues all over Britain and Ireland for many years including The Stand ( Edinburgh, Glasgow, Newcastle), The Empire (Belfast) and Laughter Lounge (Dublin) and has headlined clubs in China, Kansas City, Dubai, Moscow and Bahrain.  In the last year he has performed his show in Chicago, Dubai, Kansas City, Glastonbury Festival and Oman.  In 2018 he has starred in the US feature film “Wretch” and US sitcom pilot “McLean Avenue” . He has also starred in the film “Stephanie” alongside Moe Dunford and the sitcom pilot “Maurice and Declan”

Karl Spain spent most of 2005 looking for a woman, now he's looking for an audience. Having quickly established himself as one of Irelands top Comedians, Spain has gone from strength to strength and is currently performing live around Ireland to packed out audiences.
Having burst on the scene in 2000 as winner of the R.T.E. NEW COMEDIAN AWARD he is now established a reputation as a top headline act and excellent MC. His proudest moment was to be chosen as part of the Irish show at the Montreal Just For Laughs Festival in 2003 and has since appeared at festivals all over the world from Dublin to Dubai via Australia and of course Kilkenny.  He took his "Spain, Ireland and Beyond" tour all over the place but now he's been on TV (Karl Spain Wants A Woman – RTE), loads more will people want to see him.

Patser Murray:
Patser has a way with words. One of the top acts around Ireland at the moment, a favorite at the International Bar, Laughter Lounge, City Limits Cork, The Empire Belfast, Chaplins, Anseo, and many other established comedy clubs. He is also an established actor appearing in television on 'Love/Hate', Primeval, 'Can't Cope Won't Cope' and movies such as "You're Ugly Too" and Intermission. He was nearly in 'Game of Thrones' but his boobs although big were not big enough. He was also the man behind  the very successful PH-unny nights at the Palmerstown House. Patser is fast becoming one of Ireland's favourites comedy acts performing improvised skits with Jimmy Carr to supporting Jason Byrne, and Al Porter, Patser has been around the block! Got tea bags, and his now just waiting for the kettle, to boil.