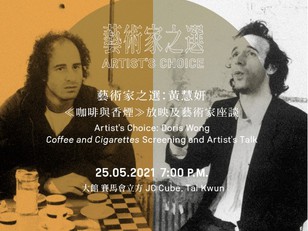 United States/ 2003/ black and white/ DCP/ in English with Chinese subtitle
There is a kind of movie that has neither a soul-stirring plot nor exquisite pictures, only simple conversations. This kind of cinema, or “conversational cinema," was mastered by Eric Rohmer and Abbas Kiarostami. Artist Wong Wai-yin is a fan of conversational cinema, and this time she picks Coffee and Cigarettes, a collection of 11 films made by director Jim Jarmusch over a period of more than ten years, which can be regarded as the result of the director's artistic research on conversational cinema. Every actor and musician in Coffee and Cigarettes, most of them are Jarmusch’s close friends or long-time collaborator, are one of a kind. The magic of the film lies in the fact that they have made a mesmerising film talking in pairs and threes about absolutely nothing while imbibing coffee and cigarettes hazardous to health.
Artist Wong Wai-yin will attend the artist’s talk after the screening, discussing her thoughts on Coffee and Cigarettes, conversation, and interview; Wong will also share her latest “conversation cinema” project Everybody’s Sick. The video series Everybody’s Sick will be shown for the first time in Tai Kwun from late May to June, it comprises 20 interview videos documenting the intimate conversation between Wong Wai-yin and her friends in the art circle, which shows Hong Kong artistic labor with a perspective that has never been seen by the public.
The artist’s talk will be conducted in Cantonese, with simultaneous interpretation to English provided.
-
WONG Wai Yin graduated from The Chinese University of Hong Kong in 2004, and The University of Leeds, UK (Master of Fine Art) in 2005. Wong experiments with a variety of media, ranging from painting, sculpture, collage, installations and photography. She has exhibited her works extensively in Hong Kong, as well as in Japan, U.S.A, Singapore, and Guangzhou.
Contact Host
View hosts events