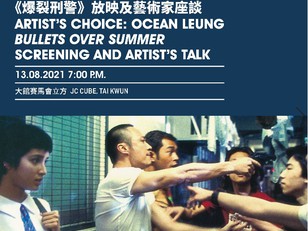 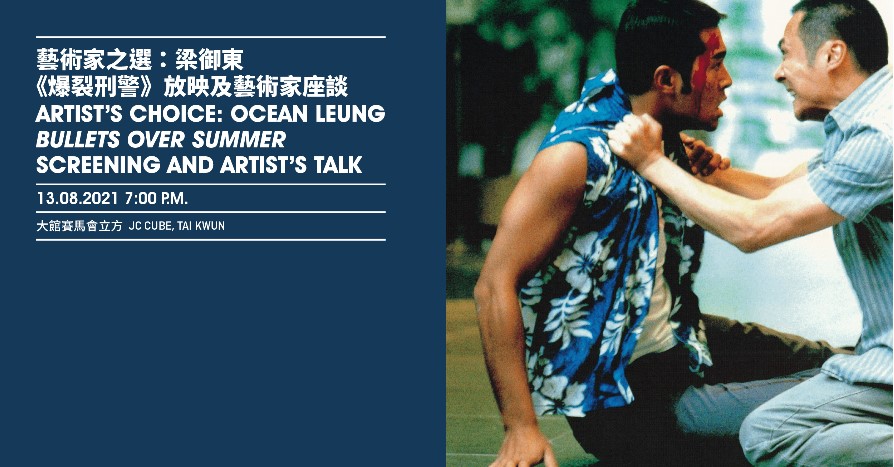 As an unorthodox and reckless detective duo, Mike (Francis Ng) and Brian (Louis Koo)’s latest mission is to track down and arrest the cold-blooded robber Dragon. Mike and Brian go undercover in the older sectors of Kennedy Town, and come across a motley crew of characters: a demented granny who provides shelter for them, the pregnant Jennifer who runs a laundry shop on her own, Yen, a street kid who habitually skips class and is out for trouble. Despite the constraints of a small budget, Bullets Over Summer strives to defy the expectations of genre by imbuing comic and romantic elements into a typical crime-action drama.

Visually violent and discordant, the artist Ocean Leung’s works usually plant lucid observations and critiques under a crude surface. His works find resonance in Bullets Over Summer’s volatility and local flavour; the artist is very much touched by the film’s energetic, mischievous atmosphere and the heavy-handed yet delightful plots. Following the screening, Leung will take Bullets Over Summer as a starting point and go on to share his recent artistic themes and inclinations, and how to extract inspiration from images and spaces from city life.

The artist’s talk will be conducted in Cantonese, with simultaneous interpretation to English provided.

Ocean’s artistic practice involves observation and intervention through flaneuring, sometimes working with found images and ready-made objects, so as to explore the interplay between art and its plights. The result appears in the form of object, installation and video, exhibited to accumulate a visual disruption.

In 2018, Ocean founded an artist collective, Epical Chamber. Born in 1983, Leung lives in Hong Kong. He graduated from the Department of Fine Arts (BA), The Chinese University of Hong Kong in 2006, and obtained a Master of Fine Arts degree (MFA) in 2016 from Graduate School of the same university. Leung is now a high school visual art teacher.