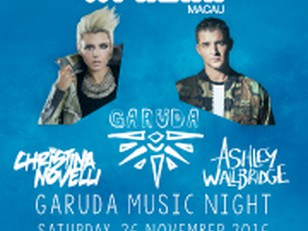 Garuda Music and Pacha Macau are teaming up to bring Ashley Wallbridge and Christina Novelli to Macau!

Securing a charging position as one of electronic music’s esteemed DJ’s and producers, Ashley Wallbridge is riding his own fresh wave in and out of the studio.

Having released "Crush" on Avicci's label Le7els, the electronic industry saw its surge highlight the Beatport Progressive Chart Top 10 in 2014 and he can count with the support of BBC's Radio 1 Pete Tong, Avicci himself, Gareth Emery, David Guetta and W&W only to name a few.

Under the mentorship of Gareth Emery, the rise of Christina Novelli's solo career is unstoppable. The debut of "Same Stars" on Armada led her straight to the Beatport Top 10 upon its released and her collaborations with dance music biggest names credited her with the DJ support from Armin Van Buuren, W&W and Gareth Emery himself.

Their tour is stopping at Pacha Macau, adding the nightclub to their portfolio of the world's best venues.

Join us on Saturday, November 26 at Pacha Macau
Doors Open At 10PM