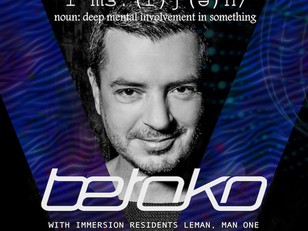 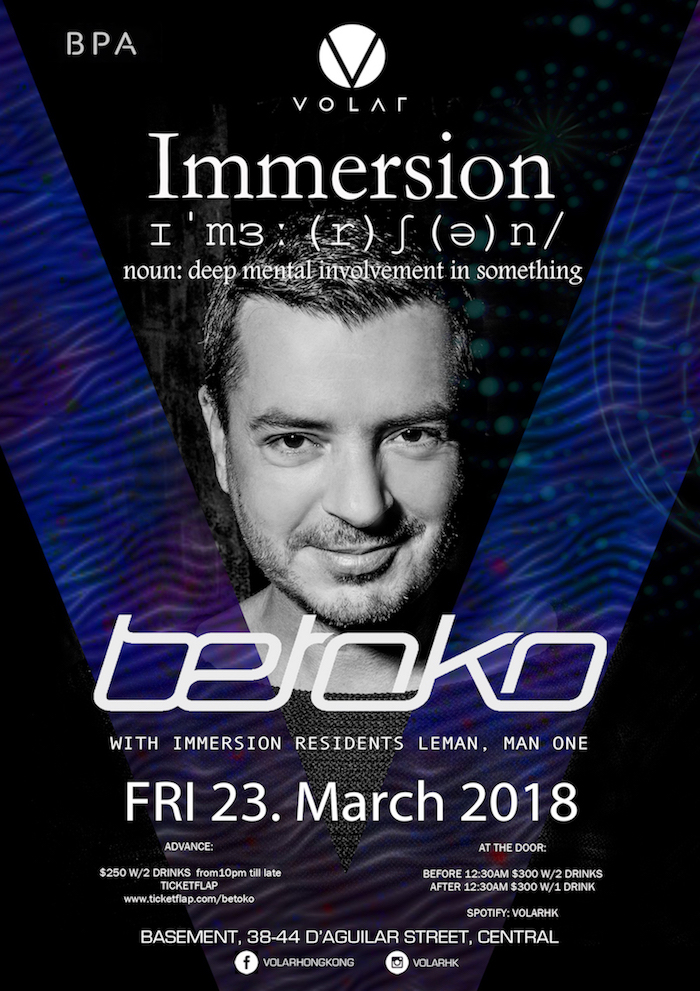 After an extended break IMMERSION returns to Volar on March 23rd and we're back with a bang as we welcome special guest DJ Betoko alongside resident DJs Leman and Man One.

With releases on Suara, Get Physical, Nurvous and Hope to name a few and regular DJ appearances at Fabric, Amnesia, Space and Ushuaia we're stocked to welcome Betoko to Hong Kong.

London based, Mexican born Betoko is a producer who has quickly risen through the ranks, having drummed in bands and played guitar as a teen, it was here that he discovered a passion for electronic music.
His early releases showed the man to have his own distinctive approach joining the dots between techno, minimal and house music with great style.
With a huge esteemed back catalogue, Betoko regularly picks up support from the worlds finest DJs, whilst his tracks have been licensed for use on TV shows like CSI, a number of advertising campaigns and Madonna’s Sticky N Sweet Tour.

His natural progression and hunger for great new music means Betoko is now the head of his own two labels, OKO Recordings and Chilli Mint Music both of which release quality dance music on vinyl/digital constantly charted by the top 100 DJs.
Betoko's global hit "Raining Again" released on Diynamic Music has become a classic and was labeled the Track of the Summer in 2012 with more than 20 Million Views on youtube. Betoko's infectious sounds have been heard at Amnesia, Warung, Green Valley, Space, Fabric, Ushuaia, Kater Holzig, numerous Festivals and pretty much every top club in the world, and has played b2b sets with DJs like Sasha and Nick Warren.

Betoko is based at the world famous Red Bus Recording Studios and is a sponsored artist of Native Instruments, Arturia and Dave Smith Instruments.

Man One's passion for compelling new music has taken him across the globe through the world’s most exciting clubs, festivals and parties.

A Man One set can feature everything from disco to techno and his selection has proved a surefire hit on dance floors around the world with extensive tours of Asia, the US, Europe and Australia.

Now based in Asia, Man One finds himself right at home at the region’s finest clubs and festivals including Fly HK, Volar, Kyo Singapore, Sonar, Clockenflap and ULTRA while also holding a weekly residency at Drop in Hong Kong and promoting the “Immersion” and “Lost & Found” events.

Always in demand, Man One can be found behind the turntables every weekend as well as producing music under his Man One and IXA pseudonyms, running his label Open Sauce Records and contributing music to movies, commercials and TV shows the world over.

HOT SUITS is a new project dedicated to quality electronic music, launched by DJLeman and his team. The project was primarily created for an upcoming tour through Brazil in December/January.

Apart from that, several cooperations with brazilian and international talents are lined up, and remixes as well as new productions will be launched very soon. HOT SUITS stands for a unique choice and taste of music, impeccable mixing and harmonic skills, as well as the appearance of an experienced DJ.
Finding a way through his massive music selection is a challenging task and his sets never turn out the same so prepare yourself for the unexpected. https://soundcloud.com/hotsuits