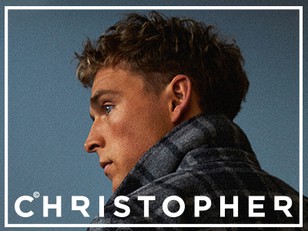 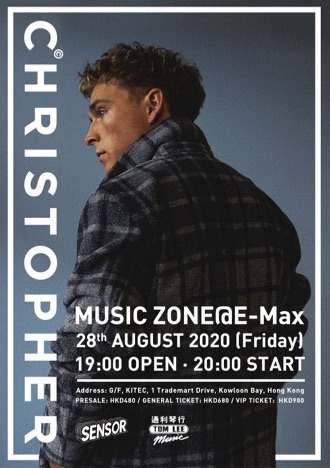 Christopher will come back for Asia Tour 2020 with his new album Under the Surface .

Christopher has amassed more than 1 billion streams worldwide and his 4 album releases and 17 official singles all sold either gold or platinum. Having become one of the biggest Danish pop musicians of his time, with sold-out shows, multiple awards and recognitions and some of the largest brand partnership deals in Denmark.

Raised in Kastrup in the outskirts of Copenhagen, Christopher picked up the guitar at the age of twelve. Influenced by John Mayer, Jason Mraz and Jack Johnson, he won his school’s songwriting contest at his first attempt and then won it again every year that followed.

“I thought when I was fifteen that I was ready to conquer the world,” he states with a tinge of embarrassment at his teenage naivety. “That confidence probably comes from the love from my Mum and Dad, and hearing people say that you’re good at something from a young age really helps.”

He soon signed his first recording contract after impressing with a set of his own originals and some John Mayer covers, but both his family and his label wanted him to finish his education. His record company bided their time until the moment was right to launch Christopher into the world.

The breakthrough came with the release of his debut single ‘Against The Odds’ which was rooted in his love of acoustic-orientated pop. With the help of the accompanying video – “teenagers fooling around, like a summer version of ‘Last Christmas’ by Wham” – everything exploded as his Facebook profile shot from 3000 likes to in excess of 100,000. His subsequent debut album ‘Colours’ built on that initial surge of interest as it peaked at #4.

Second time around, however, Christopher craved a different sound. “I didn’t want to make another John Mayer album, I wanted to make a Justin Timberlake album!” And on ‘Told You So’ that approach was everywhere, from the falsetto and funk of the title track to the pure pop vibes on ‘Mama’.

“When people heard that the track ‘Told You So’ was from a guy from Kastrup called Christopher they just couldn’t believe it,” he laughs. “I was driving in my car and I’d hear it on the radio. I’d put the TV on and see the video. It was everywhere!” A feature on Texan artist Brandon Beal’s crossover #1 ‘Twerk It Like Miley’ only amplified the attention that was thrust upon him.

With his third album “Closer” from 2016, Christopher truly began replicating his domestic success on an international scale. Taking his cues from artists such as Bruno Mars, Justin Timberlake and Michael Jackson, it turned into being a multinational mainstream experience, with the Nordsøe brothers and Beal returning alongside further collaborators including Madcon and Coffee Clarence Jr. (Rihanna, One Direction, Maroon 5).

His 2nd single from “Closer” - the smash-hit “Limousine” feat Norwegian artists “Madcon” - swept the charts and has streamed +24 million on Spotify.

With “Closer” Christopher saw the first impressing international results coming in: In 2015 he was awarded “Most Promising International Artist” by Chart Awards 2015 – The Chinese Music Awards - and has since had no less than 9 x #1 singles on QQ Music

February 2019 saw the release of his long anticipated 4th album "Under the Surface". A honest, true to his heart organic textured album, which included the major hit “Irony”. A self-reflective and very personal take on current human issues, Christopher draws from topics and experiences from his own life. With "Irony," he touches upon various societal aspects, where a glossy filter is added to prevent dealing with the actual issue; Struggles of self-image, the addictiveness of “Likes”, health-damaging habits and a growing awareness of the need to create a more sustainable world – but where actions fail to follow thoughts.

Earlier this summer, Christopher once again turned up the pace with the release of his uptempo vibey pop tune; "Real Life". Where the warm, tropical guitars effortlessly flirt with a danceable beat, which truly got the summer-feeling going.

The lyrics are written by Christopher himself, drawing on his own personal experiences.

"Real Life" is a tribute to happiness and its ultimate premise; That the pure feeling of happiness through love only exists in contrast to the challenges of life.

“Is this what heaven feels like, this just can’t be real life, it took some time to realize, after all we’ve been through, the good parts only feel like they do, cause we've had the bad parts too"

Christopher just finished up his Asia tour, where he performed in sold-out venues in both Beijing, Shanghai and Seoul. In Korea, he was surprised with a Gold Plaque for his recent album “Under the Surface”, a reconfirmation of his growing fan-base in the region.

The popstar is by no means resting on his laurels, he will be spending the Summer touring festivals both in his home country Denmark as well as in Germany.