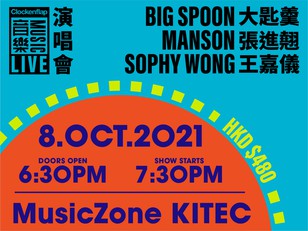 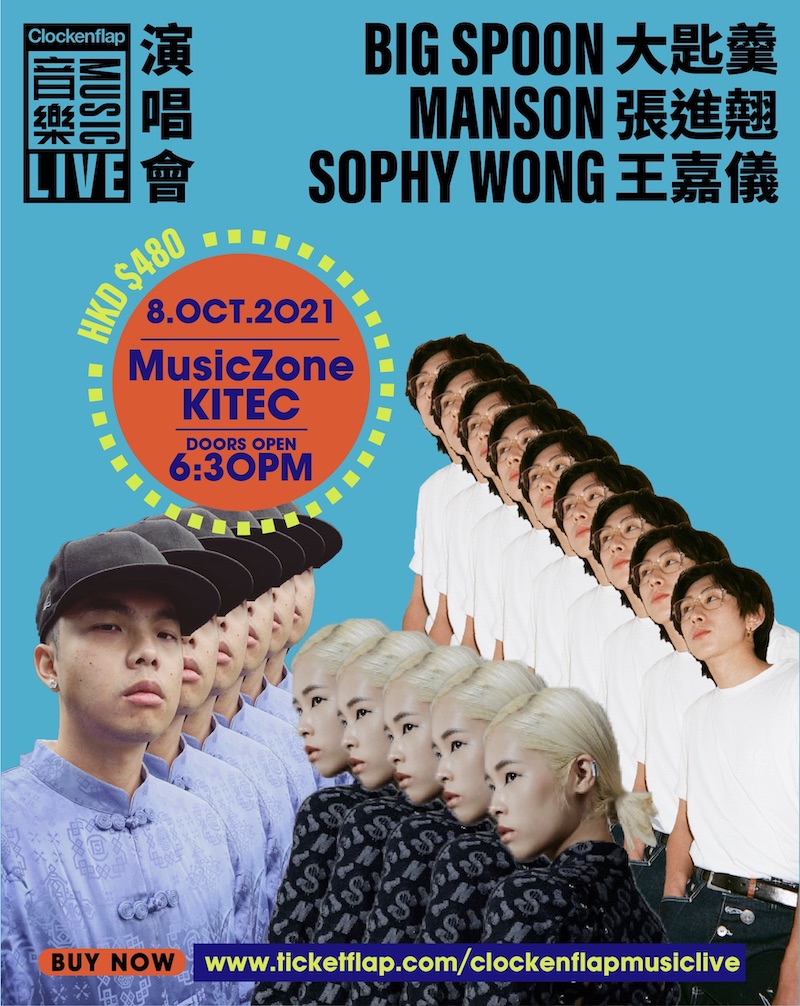 Clockenflap Music, the digital music platform from the team behind Hong Kong’s premier music and arts festival, is bringing its eclectic sounds to the stage with the first-ever Clockenflap Music Live. Taking place at KITEC Music Zone on Friday 8 October 2021, the show will feature live performances from three of Clockenflap Music’s best-known hosts—Nicholas Cheung (aka Big Spoon / 大匙羹), Manson Cheung and Sophy Wong—as well as a selection of special guests. Tickets on sale now: www.ticketflap.com/clockenflapmusiclive

The host of Clockenflap Music’s hip-hop show ‘Inside Scoop’, the multi-talented Nicholas Cheung has made a name for himself as a rapper, producer, songwriter, concert promoter, HYPEBEAST Music Editor, A&R and, most recently, as Head of Hip-Hop and R&B at Warner Music. Since releasing his first, critically acclaimed EP, ‘I AM’, at the age of 22, he has gone on to work with an array of respected artists from around the world, including Marcus D, Ekin Cheng, Project Pat and Emma Hewitt, while he also launched Gluestick with friend/business partner Elton Yau in 2018 to bring international hip-hop, indie and R&B acts to the city.

As a rapper, Nicholas goes by the moniker of Big Spoon, and is known for taking themes and slang from American trap and drill music and translating it into the local dialect. For his bilingual performance at KITEC, expect an all-action set full of hard-hitting trap bangers, secret special guests, and a unique way of giving back to society.

As well as hosting ‘Welcome Aboard’ on Clockenflap Music, Manson Cheung is one of the hottest rising stars of the Hong Kong music scene. Formerly the lead singer of metal band Puzzle Experiment, he has since found fame as a singer-songwriter, actor and multi-instrumentalist.

For his intimate set at KITEC, Manson promises to take the audience on a dreamy yet energetic musical journey laced with spirituality, darkness and humanity as he shares the multiple sides of his personality and various layers of his emotions. From solo renditions to the full band experience, Manson will play a hand-picked selection from his back catalogue, along with exclusive performances of unreleased material.

The host of Clockenflap Musicshow ‘Whisper To Me’, Sophy Wong is one of the most distinctive singer-songwriters to emerge from Hong Kong in recent years. Influenced by Cantopop, alt-R&B and electronica, she is known for her innovative approach to making music, through which she constantly strives to break down the boundaries between genres, and between the mainstream and the underground. Sophy also recently signed to imagine.nation Entertainment, the label headed by Hong Kong singer, record producer, actor, and director Juno Mak.

In her Clockenflap Music Live performance, Sophy will be joining forces with long-time collaborator and producer hirsk, who was recently honoured at the prestigious Golden Melody Awards in Taiwan. With hirsk as her band leader, Sophy will perform a set that stays true to her electronic roots while introducing some more upbeat grooves.

Doors open at 6.30 PM on Friday 8 October 2021 (with an 11pm curfew), and tickets are priced at HK$480. For more information, and to purchase tickets, please visit: www.ticketflap.com/clockenflapmusiclive

Created by the team behind Hong Kong’s premier music and arts festival, Clockenflap Music is a Hong Kong-based music platform that celebrates musical discovery in all its forms. Featuring a handpicked roster of DJs, artists and music industry insiders from Hong Kong, Asia and around the world, Clockenflap Music champions the best new and underground sounds from across the musical spectrum, from exclusive artist-led playlists and live performances to insider news and revealing interviews.