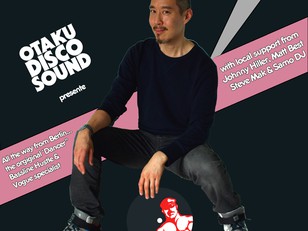 Danny Wang's widely regarded as an ahead-of-his-time 90s productions inspiring the likes of Morgan Geist, Lindstrom and DFA to pursue their own eccentric visions of modern disco. His inimitable style has inspired generations of music lovers globally.

Daniel Wang is probably one of the most influential (non-commercial) dance music producers of the past 20 years. Danny is almost certainly the most internationally renowned 'ethnically Chinese' disc jockey traveling the world today, if not historically since the birth of DJ culture in the mid-seventies. This pretty much makes this party a watershed event, as it sees Danny playing his very first ever Hong Kong show. Danny will be bringing his unique take on musicality and original DJing style to Otaku Sound System's curated event, taking place on the 19th of April, at Premium Sofa Club (formerly xxx) in Sheung Wan.

Daniel Wang was born in California but lived in Taiwan for eight years during his childhood. After returning to California for high school, Wang continued his education in New York and Chicago, studying psychology and literature. While completing his masters in Chinese Japanese language literature (a little know fact: Danny speaks 7+ languages fluently, yes fluently!) with a specialty in early pre-War Chinese cinema he ventured out to nightclubs full of gay people, club kids, and Afro-Americans who lived for music and dancing. In 1990 he settled in New York City where he worked at a vintage synthesizer and record shop and where he forged a friendship with the similarly minded Morgan Geist & Darshan Jesrani of Metro Area and another dear friend of ours Brennan Green. Starting his own record label Balihu in 1993, he soon after released ‘Like Some Dream I Can’t Stop Dreaming’, a song which took the relationship between repetition and rapture to new heights. ‘Like Some Dream…’ sent shock-waves through the dance underground and these days is regularly covered live by Hercules & Love Affair; you can hear it’s legacy in the tweaked disco-house of Soundstream and even Thomas Bangalter (Daft Punk).

Essentially, Wang strongly echoes 'disco aesthetics' throughout his persona - being an avid Vogue dancer he is also known to wear outrageous outfits during his sets to suit the occasion. During his performance as one of the most restless and classically minded members of the dance music community usually Wang concerns himself with melody and texture. We are eagerly awaiting one of his lauded disco sets in Hong Kong, even those who are old enough to have made it into Canton Disco and Disco Disco will know what we are talking about.

Whist Danny is known to include a good house or italo track, he sees contemporary electronic music culture as a generic experience, like an 'Emperor wearing no clothes"". There is so much hype, ego, and masses of party people who confuse the messenger with the message. 'Part of me is objective about it and says, well, not every human is a wine expert, not every human appreciates the basics of even good food, they eat rubbish and drink Coca Cola, so why should their senses be any more sharp for beautiful music, beautiful objects, and so on? But part of me thinks that you just can't relativize all this. You listen to radio hits AND dance music up until the late 80s, and there is a basic quality in musicianship and composition, a solid bottom line which doesn't exist now. Real dance music lovers will appreciate the production aesthetics of 70s and 80s, which essentially is the summation of great jazz session musicians, percussionists, singers, engineers, proper production values with regard to EQ, panning, compression. Whilst we play all kinds of music (from balearic & cosmic to house & techno) at Otaku events, it still is an important message and beauty we like to promote in the generally vibrant landscape of Hong Kong's Club scene.

Now residing in Berlin for the past 10 years and a regular fixture of the scene, Danny's outspoken views on popular music culture has led him to be invited as a lecturer on Red Bull's Music Academy, and his enthusiasm can be felt all the way to the dance floor. Whilst his DJ sets are colourful affairs, you will feel a liberating sense joy on hearing his music selection. As an involved dancer within Berlin's avid Vogue dancing scene Danny understands one of the fundamental expressive periods in dance music's history has taught us:

We play everything that's groovy - yes ""jazz-funk"" and ""disco"", but also lots of house, 80s boogie, current dance music across genres. It's just about FEELING THE MUSIC and MOVING YOUR BODY. Groovy music made by humans who care about a good bass-line or a good song. It’s just about love, falling in love with some beautiful boy or girl or thing on the dance-floor. It’s about fantasy, so forget the expensive Gucci bag and go out in a leather harness or a ballgown instead. Or.... just go naked.’ - Danny Wang