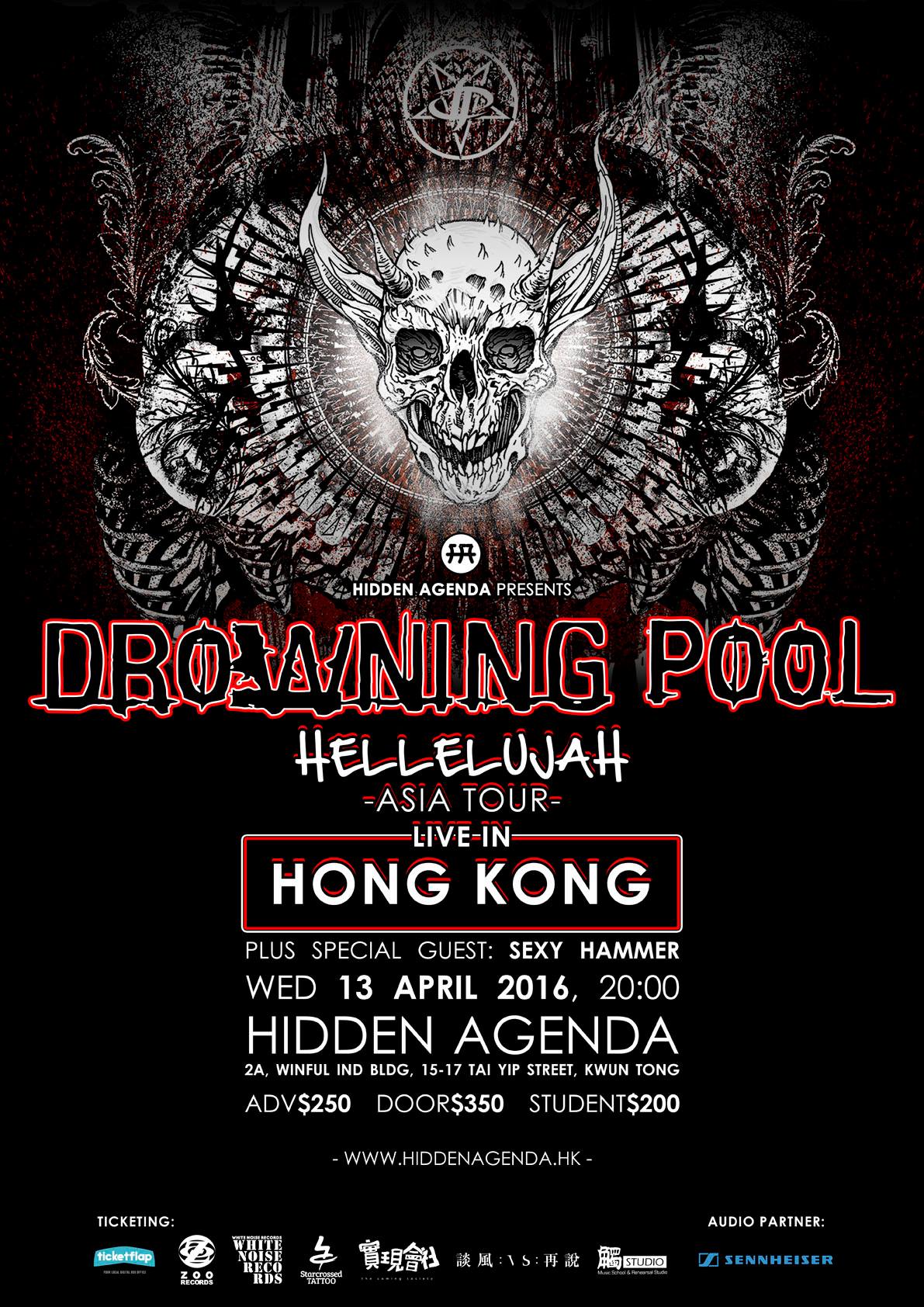 Giant riffs, crowd moving grooves and monstrous vocals are the tools with which DROWNING POOL build triumph out of tragedy, steadily evolve without compromise, and remain true to their supporters with over a decade’s worth of remarkable fortitude and attitude. HELLELUJAH is absolutely the album their diehard fans demanded and the aggressive heavy rock world at large deserved.

The platinum-plus conquerors from The Lone Star State deliver their heaviest batch of hell raising anthems, each burning with fiery adrenaline destined to light the radio ablaze and ignite crowds into impassioned sing-alongs. Only a few seconds into the album’s first single, “By the Blood,” it’s evident that Hellelujah is the most aggressive, ambitious, and truly definitive Drowning Pool album since Sinner, the platinum platter that gave the world Top 20 rock radio hit “Tear Away” and the massively successful “Bodies.”

It doesn’t get more brazenly defiant than Drowning Pool Hellelujah bangers like “We Are the Devil,” “Goddamn Vultures,” or “Push”: forward thinking modern rock anthems incorporating classic elements of brutal grooves with melodic power that never once sounds weak. C.J. Pierce’s guitar work is devastatingly crunchy yet dynamically colorful, locking in perfect sync with the charging rhythms of fellow cofounders Stevie Benton on bass and Mike Luce on drums, as Jasen Moreno’s vocals forge venom and bile into hooks.

Drowning Pool have scorched the stage alongside a who’s-who of genre legends, upstarts and everything else on the spectrum, including Ozzy Osbourne, Mötley Crüe, Papa Roach, System Of A Down, Kiss, Korn, Sevendust, Seether, Hellyeah, P.O.D., Five Finger Death Punch, Black Label Society and stints on Ozzfest with Metallica, Rob Zombie, and Marilyn Manson.

Each of Drowning Pool’s last three albums debuted in the Top 5 on Billboard’s Hard Rock chart, cementing the legacy established by their legendary platinum debut, Sinner, which the band celebrated with a 13-year anniversary special edition and tour. Moreno’s massive pipes enabled him to quickly master Drowning Pool’s dense catalog when he became the band’s frontman in 2012. From his reverent delivery of the late Dave Williams mosh-pit ready lyrics in the ubiquitous signature hit “Bodies” to his powerful take on Top 5 Active Rock hits like “Step Up” from Desensitized (2004), “37 Stitches” from Full Circle (2007), and “Feel Like I Do” from their self-titled album (2010). As Revolver Magazine noted in their detailed review of Resilience (2013): “Drowning Pool continue to produce consistently killer albums with an unmistakable sound.”

Hellelujah (2016) is unfiltered and uncompromising, representing a band free to say, play, and do what they please, thanks to the unending support of their fans. Their shared loyalty, drive, and passion resulted in what Moreno describes as a “bad attitude record,” an album that pulls no punches with inspired confrontation. Producer Jason Suecof (All That Remains, Trivium, Demon Hunter) was the perfect man to capture the blend of metallic roots and instantly memorable choruses, riffs, and wickedly upfront lyrical assaults.

Drowning Pool songs conjure emotions that deeply connect with those who persevere against the odds and sacrifice to survive, whether it’s a military soldier serving overseas, or a blue-collar family trying to make ends meet. Their music transcends boundaries of race, class and lifestyle as well, resonating with people from all walks of life who look to music to get them through life’s challenges. The band’s Texas-sized crunch and gregarious, charismatic personalities catapulted them to platinum status and hard rock royalty in the early 2000s alongside contemporaries like Disturbed, Godsmack, and Slipknot. They’ve toured with Ozzy Osbourne. They regularly perform for U.S. Troops, traveling as far as the war zones of the Middle East to the outposts of Southeast Asia. They personally encouraged then-Senator Barack Obama to push through the Lane Evans Health Act, which improved healthcare for veterans.

Big sonic slabs of muscular power with a taste of the dark melodies of post-grunge remain Drowning Pool’s stock and trade. Their music is an unapologetic celebration of life’s joy and pain, able to swiftly maneuver between defiant declarations of resistance. Each distinctive era of the band’s history is represented onstage, where the band bashes through an arsenal of anthems all delivered with precision strength. The Hellelujah songs (with more contributions from all four members than ever) pulse with the power of all that’s come before and a reinvigorated hunger for the future. Drowning Pool celebrate the past while firmly focused on the present, coalescing into a brightly lit artistic future.