with 3 of the best comedians from each, making for one of the best shows Punchline has ever staged! 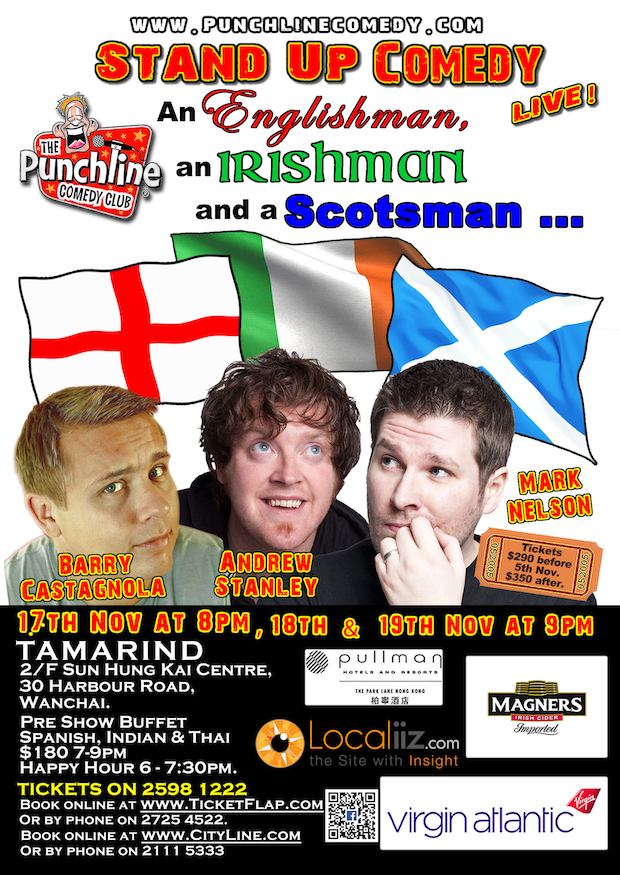 The Punchline Comedy Club presents ENGLISHMAN IRISHMAN SCOTSMAN with 3 of the best comedians from each, making for one of the best shows Punchline has ever staged!

Over the last few years, Barry has established himself as an extremely accomplished comic performer, writer and actor.  As well as performing stand up on the UK and International comedy circuits, he has created, appeared on and written for numerous television projects.

He appeared in the Christmas episode of Greg Davies’s Channel 4 sitcom Man Down (on which he was also a contributing writer) and recently Barry has created and performed a variety of comedy characters for new television shows - Eye Spy (Objective for Channel 4), The Secret Interview (TwoFour Productions for Channel 5) and Dom Joly’s primetime ITV show, Fool Britannia. He was also a regular cast member of the MTV comedy Flash Prank.

Since winning the inaugural Scottish Comedian of the Year Award in 2006, barely a year after his first-ever open-spot, Mark Nelson’s mix of dark humour, cutting observations and superb one-liners has seen him firmly established as one of the UK’s biggest-hitting comedy powerhouses.

Winner of Best Radio Show 2014 and Best Headliner 2015 and 2016 in the Scottish Comedy Awards., Star of BBC’s Don’t Drop The Baton,The News At 2 and Mark Nelson's Guide To Marriage.

Andrew’s performed on ITV shows ‘Take The Mic’ and ‘Young, Gifted & Broke'; as well as ‘I Dare Ya’, ‘Liffey Laughs’ and ‘Montreal Just For Laughs’ on Ireland’s national TV channel RTÉ; as well as writing and contributing to numerous other shows on Channel 4 and Ireland’s TV3.

He’s also resident MC in numerous clubs around Ireland including Dublin’s legendary Comedy Cellar, where he uses his gift of the gab to craft the perfect atmosphere!