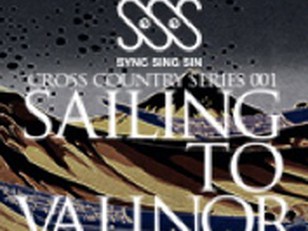 Not your usual Halloween event.

SYNC SING SIN is proud to present "Sailing to Valinor," a night of eclectic grooves featuring the edgy ACID RABBIT (庫巧兔）, bringing in her fresh baked set straight from the taiwan underground , your mistress's favorite DJ crew LIVING DISCOHEADS, YUEN CHI-CHUNG （袁智聰）, the real deal music critic who surely knows his ways around the decks (this is your chance if you missed him from Clockenfrap last year), plus your sister's favourite, chick magnet Alok and Shelf-Index from the SYNC SING SIN family. Calling out the Ghost in the machine, we won't be responsible if the gear starts playing by themselves, don't say we didn't warn you.

ACID RABBIT(庫巧兔）:
Previously the Chief Editor of the magazine "LEZ", coming from the school of punk and rock, then sliding into the realm of electronics,you can be so sure that this girl is up to something. Started out with Electro in 2010, now on a blend of Tech House. Techno/ Grime/ Indie Rock/Nu-Disco. Without any specific background, Rabbit's been invited to play at various parties and festivals, plus sharing the stage with big names such as CARSICK CARS and Yasumasa Yonehara (米原康正).

LIVING DISCOHEADS
Living Discoheads is a Hong Kong based DJ Crew formed in 2012. The crew is formed by three members, Tedman, vocalist of local indie band ni.ne.mo along with DJ Tinlok and DJ MNI, two experienced DJs with electro / nu-disco influence. Having been inspired by a wide variety of music genres in the past, the crew is bringing a breath of fresh air into the local party scene with its distinctive style and unique music choices. The music contains mash-ups of funky disco basslines and catchy hooks from the old days coupled with new elements of Electro, Trap, Moombahton, Hip Hop, etc.

Since the formation of Living Discoheads, the group has worked on bringing the freshest mixtapes and most stylistic parties to the scene. With the event
Contact Host
View hosts events