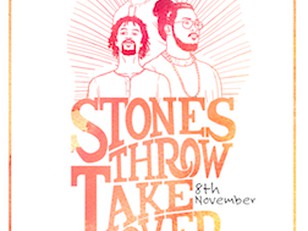 Mndsgn
Ringgo Ancheta is an anomaly among hip-hop producers - not raised in the suburbs on a steady diet of video games and hip-hop, but in the forest like a beast. His parents were members of the Philippine arm of the Aum Supreme Truth Cult, whose venture into terrorist activity caused them to flee the group in the late 1980s. They were granted political asylum in the U.S. and settled in rural New Jersey, where Ancheta was raised on the outskirts of a commune without electricity while his father worked as a researcher at Princeton Neuroscience Institute.
Ancheta describes one of his earliest excursions of his own into the modern world, when he hitchhiked to Philadelphia. "The first guy I met on the street introduced me to the world of music and beat making. Within a day I was making my own beats on his sampler."
As his trips into the city became more frequent, he began using the name Mndsgn (pronounced "mind design"), inspired by the Nas lyric, "my mind is seeing through your design like blind fury," and a not-so-subtle nod to his father's work in neuroscience.
His transformation complete, Mndsgn headed west. He now resides in Los Angeles and is signed to Stones Throw Records, who will release his debut album Yawn Zen on August 26, 2014.
He's carved himself an unusually calm-sounding place in the Los Angeles beat scene. Songs on Yawn Zen were recorded "in a state of bliss," as the producer explains. "I've allowed myself to study the absence of daily struggle and it's effects, and began to subconsciously paint that vibe in the music. Yawn Zen comes from a very neutral place that we, sometimes, are too busy to realize is there."
https://www.youtube.com/watch?v=h_ZKRFxxFU0 http://mndsgn.biz/

Knxwledge
fter a long pause, Glenn Boothe responds, "I'd say probably half a million." He's seated at his desk surrounded by strewn-about records, a poster emblazoned with the word "BEATS," stacks of unmarked cassette tapes, and a tousled bed, and behind him, the LA sun shines through his basement window, backlighting his slumped silhouette and accentuating the smoke that wafts from the second joint he just finished rolling. Boothe's answer is suprising, and it comes after we've spent over an hour talking via Skype about his work as Knxwledge, the handle he uses to prolifically—some might say incessantly—drop his brand of soul-drenched instrumental hip-hop on Bandcamp and, with considerably less regularity, labels like Stones Throw, Leaving Records, and All City. It seems like a totally improbable number, but then again, his estimation brings to mind something the producer said at the very beginning of our interview: "I've been making beats since I can remember."
Born and raised in central New Jersey, Boothe was one of three boys in a church-going family full of singers and musicians proficient in just about every instrument available to them. "My mom and dad would clean the church every weekend," he says of his childhood, "so I'd have access to every instrument that was there. And the [church] musicians all had to get new instruments, so I would just take all the old instruments." Inspired by early Nas ("the grimy soul-sample joints") and '90s R&B, the nascent, self-taught artist began to put together a ramshackle set-up and make his own recordings at the tender age of 11. "I was trying to make hip-hop shit from the gate," Boothe tells us with staunch conviction. He elaborates, "They used to record the sermons in church, and have these stacks of tapes. They had like 15 minutes on each side, and I'd bring a 303 to church and record it straight to tape." Surprisingly, many of these early tracks still exist, and sporadically appear on his new releases. Even Knxwledge's brand-new second LP for All City, Kauliflowr, features elements of recordings from "way back when."
https://www.youtube.com/watch?v=h_ZKRFxxFU0

Pyramid Vritra
22 year-old, LA-based Pyramid Vritra has been making beats and writing rhymes since he was just ten years old. When he was in high school in Atlanta, he founded the hip hop collective NRK (Nobody Really Knows) and subsequently linked up with Matt Martians of Odd Future after Martians heard NRK’s tracks on Myspace. When Pyramid Vritra and Matt Martians met, they naturally clicked and the collaborations began. They formed The Super 3 production group, and soon after, he and Martians formed the Jet Age of Tomorrow releasing their music via Odd Future.
During the day Pyramid Vritra drives a forklift around a home improvement store in South Los Angeles. His co-workers have no idea he makes music, he says ‘he tries to not talk to anyone there.’ Introverted in nature, Pyramid Vritra allows us to find out a bit about him through his debut 16-track record, Indra. The album swings in and out of darkness and highlights Pyramid Vritra’s knack for rhyming and making obscure beats – all sample free.
Pyramid Vritra reveals that on Indra his production and lyrics contain a lot of emotion. Adding, ‘there’s fluidity and a calm in the midst of complexity.’ Which might explain his name, Pyramid Vritra, which has two parts to it, he adds, ‘the pyramid has sides that are steep and smooth. Vritra is both a god and demon – a demon who kept the waters of the world captive until he was slain.’
https://www.youtube.com/watch?v=QGmsfioDyxU