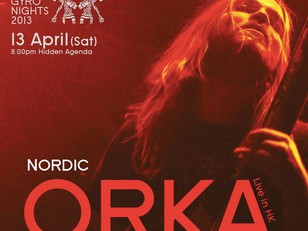 ORKA started in a small farm on the Faroe Islands during the winter of 2005. ORKA spent the winter building innovative instruments out of materials found at the farm. Using these instruments ORKA made experiments crossing diverse genres as industrial, hip hop, rock, ethnic Faroese, and dub - one reviewer named the genre “Avant-Garde Pop”. Their debut 2007 album Livandi oyða [Tutl, Ici d'ailleurs] was well received, especially in Germany and France, which ORKA toured extensively. Shortly after the album release ORKA was offered a 14-day residency at the Trans Musicales Festival, where ORKA collaborated with the French, melodic noise-maker Yann Tiersen.

After touring the continent for two years and being nominated for the Nordic Council Music Prize 2009, ORKA started work on the follow-up album ÓRÓ [Tutl, Ici d'ailleurs]. The album was recorded in a concrete salt warehouse by the Ports of Tórshavn in the snow of February 2010. ORKA rented the building for 1 month, fixed microphones and geophones on all 3 levels, staircases, elevators, built instruments and wrote and recorded all the material then and there together with producer Oktopus. The result was a dark Lynchian universe, luminous with icy Nordic vocals on top of evolved grit hop.

Since 2010 ORKA has toured Europe regularly but has focused on being in the studio and in underground bass clubs creating a new sound, and working on ORKA's next album. ORKA is now ready to let the audience in to ORKA's new universe and is touring again in a one-man multi-instrument setup. The new album is expected to be out in 2013.

CALIGINE (Psychedelic Folk/Italy)
Summer two thousand and seven. Main idea: to use more acoustic guitar and less clipped overdrives. First results: smokey and hazy folk textures beneath a grain of noisy dust. A process carried on year by year - forgetting the distortion, worshipping the grain of wood. Rejecting the form, accepting the embrace. A collective endeavour without belonging. If art is all stealing from the most obscure sources, then this is pure craftmanship: psychedelic ragas, fingerpicking and all the little bells. Folk? We're from the city you know. Caligine collaborated with Kawabata Makoto in Shanghai tour recently.