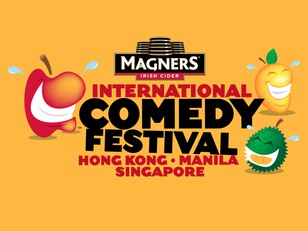 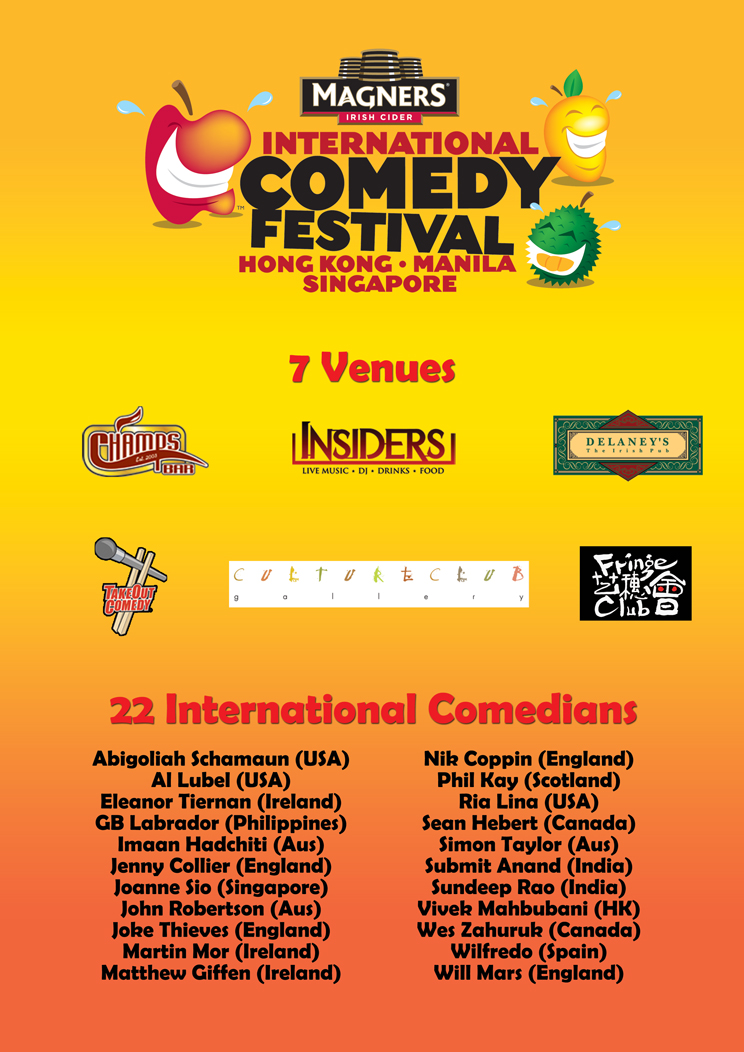 Passport Tickets allow the user to visit any of the venues on the day specified.

The 3 Day Pass allows the user to visit any of the venues through the three days of the festival.

The Performers:
Wes Zaharuk (CAN) - A Prop performer who can entertain with Family friendly performances. He is returning from 2014 due to demand

Will Mars (UK) - Will is another artist returning to Asia for the festival. His show, Joke Thieves is being televised by the BBC in the UK and is set for fame. Catch him in an intimate environment for the last time

Eleanor Tiernan (IRE) - Eleanor who has performed on Irish RTE TV, on a number of occasions, sparked a major viral spoof reporting of a fictitious case in Dublin. Eleanor comes from comedy family as the younger cousin of Tommy Tiernan and will feel at home during St Patrick’s week

John Robertson (AUS) - The Dark Show. John has 2 show - 1 is as a stand up performance, the other performed in total darkness!

Ria Lina (PHIL/GER) - Ria is returning to Singapore and adds the Philippines and Hong Kong as first time locations for her. Ria is part Filipina, part German and has been entertaining audiences for nearly 10 years, despite her very young age

Nik Coppin (UK) - Huggers for kids; Shaggers for the grown ups. With comedy, cabaret and fun for all the family to enjoy, Huggers makes its debut in Singapore, Hong Kong and Manila after sell-out shows at festivals worldwide

Abigoliah Schaumaur (USA) - A winner at the recent Edinburgh Fringe, Abigoliah is from the US and has a crass but highly amusing take on relationships

Simon Taylor (AUS) - A stand-up comedian from Australia that has performed all around the world, he describes himself as “a shooting star of the comedy scene

Martin Mor (IRE) - Martin is an old hand on the comedy scene, with TV and the ability to entertain kids or parents. The 2nd Irish comedian who will also love the Irish audiences over St Patrick’s

Imaan Hadchiti (AUS) - The worlds’ smallest comedian but big on laughs and has recently toured the USA to much applause. Imaan returns for a 2nd year to the region
Matt Roper/Wilfredo (UK) - Lover, thinker, poet and drinker, Wilfredo has been winning hearts and minds right across the globe: from seducing the fringe-goers of the Edinburgh Festival, to showering the late-night

Jenny Collier (UK/USA) - Jenny moved from the Welsh mountains to the Big Smoke in 2010 and has since embarked upon a career in Stand up Comedy. Highlight: being teammates with comedy legend, Jo Brand on a BBC Radio panel show. Low point: After a gig an audience member saying ‘You should be a stripper’. (Both secretly highlights)

Phil Kay (UK) - The legendary Scottish Storyteller and master of mirth and mayhem. Come and hear all the best stories from very creative comedian. Still wild, anything could happen. Come see a man from whom the words just flow in a bawdy stream of comic consciousness

Matthew Giffen (UK) - Fast, frenetic and sometimes furious, Matthew explores his place in the world as an Irish Colombian born in England and the implications this has on his unique outlook on the world, prepare to be blown away

Vivek Mahbubani (IND) a Hong Kong-bred bilingual stand-up comedian performing in both
Cantonese and English. Having been crowned the Funniest Person (in Chinese) in Hong Kong in 2007 followed by his victory in the English category at the Hong Kong International Comedy Competition in 2008, Vivek has had the opportunity to take his sense of humor all over Asia including Hong Kong, China, Macau, Singapore, Malaysia, Manila, Bangkok, Sri Lanka and India. Having been ranked as the top comedian in Hong Kong, in 2014, the World Famous Laugh Factory in USA ranked Vivek as one of the top 10 comedians in their Annual Funniest Person in the World Competition. One of Vivek's passions is reading and his favorite book is Sun Tzu's Art of War. Oddly, his favorite color is hot pink

Sean Herbert (CAN) - a stand-up comedian from Toronto who earned nearly a decade of experience entertaining audiences all across Canada before moving to Hong Kong in 2012. He’s since brought his unique comedic perspective to eight countries around the region as a headliner, including hosting gigs for marquee acts like Dave Chappelle, Ari Shaffir, Dwayne Perkins, Tom Segura and Barry Hilton. When not on the road, Sean has built a name for himself locally as a feature writer and lead film critic at HK Magazine, and as a showcase regular at TakeOut Comedy in Hong Kong, where he was twice selected as a finalist in the Hong Kong International Comedy Competition