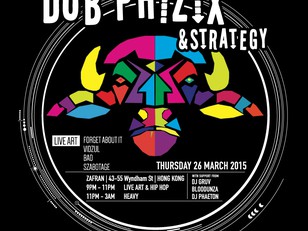 Drum and bass and live art 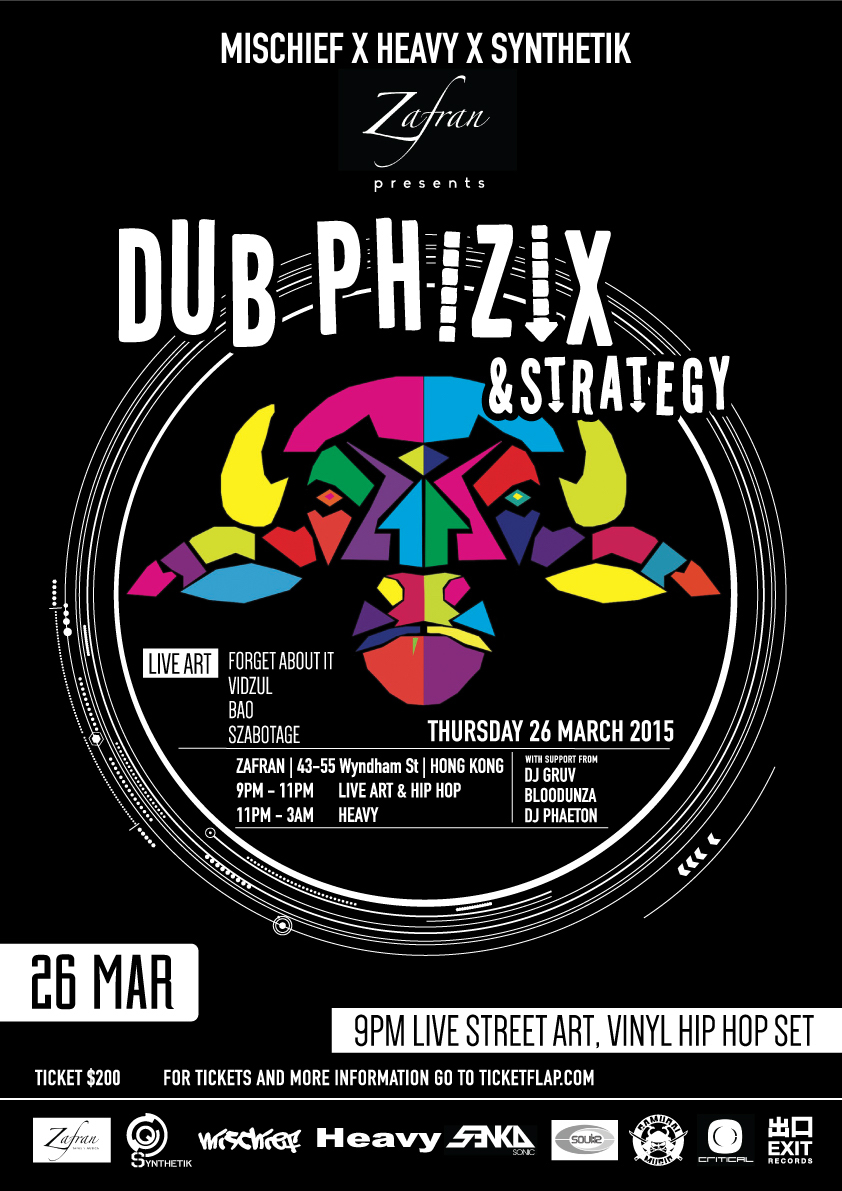 As a an alternative warm up to the Hong Kong Sevens, we are hyped to put on a night of live Street Art, Hip hop and Drum and Bass in two rooms at Zafran!

The event is a collaboration between Mischief Productions, people who brought Secret Walls to Hong Kong, HEAVY HK and Synthetik.

HEAVY HK has been running for 9 years, bringing underground, international Drum and Bass and Reggae Artists out to Hong Kong.

Zafran by Aqua Restaurant Group is kindly hosting the night which gives local DJs, MCs and artists a chance to play with the internationally acclaimed Dup Phizix's and Strategy. Zafran is situated in the heart of LKF Central, offering a variety of tapas and creative reinterpretation of Spanish cuisine, Zafran is a world away from the traditional Spanish themed restaurant; it is a basement venue with an underground flabour that is reminiscent of some of the hottest nightspots in Manhattan.

Warming up the night from 8pm - 10pm will be DJ Gruv, one of the last few Hip Hop vinyl, scratch DJs in Hong Kong. Mischief Productions will be providing live art work by Szabotage (Secret Walls, Series 2 Finalist, Forget About It, Vidzul and Bao Ho). The guys will be painting large chalk paint walls, in keeping with the great artwork inside Zafran. Support your local artist!

The creator of a new style of Drum and Bass music that fuzes influences from all corners of the globe, Manchester based Drum and Bass producer Dub Phizix began his obsession with music over 20 years ago. At the time Dub Phizix, (or George to his mum) was just someone who annoyed the neighbours. By 10 years into his career of music construction, Dub Phizix was an accomplished producer having made music in a variety of styles for MTV, BBC, Nokia and 4Music.

People love Strategy. Raised on the Costa Del Salford and honing his craft in some of Manchester’s most notorious nightclubs, STraTS has made contributions right across the board when it comes to UK music. From his part in Broke’N’£nglish alongside fellow northerners DRS and Konny Kon who shared stage and studio time with names such as the Wu-Tang Clan, Mobb Deep, Roots Manuva, Snoop Dogg and many more, to his work in the UK bass music scene collaborating with and hosting for artists Dub Phizix, Mala, Zed Bias and Calibre to name but a few…everybody knows Strategy.

All of our artwork, graphic design for the event has been produced by Synthetik a new web, merchandise and graphic design company. Come and celebrate the launch of both Mischief Productions and Synthetik with some HEAVY basslines.