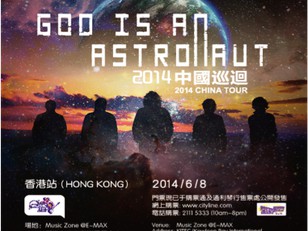 They are the band from Ireland, with a Post & Space rock music style to impress every audience. This time, they finally came to Hong Kong, like Post Rock friend, absolutely not to be missed.
Band Introduction：
God is an Astronaut are a 5 piece band who hail from Glen of the Downs, Ireland. Currently one of the worlds biggest instrumental bands they took their name from a line in Clive Barker’s film ‘Nightbreed’, the band was formed by twin brothers Niels and Torsten Kinsella in 2002. After recording their first demo’s, and with numerous labels offering deals (yet looking for the band to add vocals to their music) they instead decided to set up their own label ‘Revive Records’ to release their debut album ‘The End of the Beginning’ in 2002. This crucially allowed the band to remain in complete creative control.
The band was founded in 2002 by Niels and Torsten Kinsella, and since then has expanded to include Lloyd Hanney (drums), Jamie Dean (piano/synths) and Gazz Carr (guitar). During the recording of Origins, the band were additionally joined by Pat O’Donnell on vocals。
God is an Astronaut’s seventh full-length album, Origins, is their first as a five-piece and cements their place as one of the world’s most intense, musically- and visually-inventive post rock bands. Renowned for their searing live shows in which the music is married with provocative projected imagery, GIAA consider each of their albums to be a sonic ‘photograph or snapshot of who we are in that moment of time’ and Origins is perhaps their most saturated, striking snapshot to date.
Origins is notable also in GIAA’s return to Rocket Girl records, who licensed the band’s breakthrough album, All is Violent, All is Bright in 2005. In the eight years since then, GIAA have continued to release albums and an EP on their own Revive Records (A Moment of Stillness EP, 2006, Far From Refuge, 2007, God is an Astronaut, 2008 and Age of the Fifth Sun, 2010), amassing a vast following on social media sites (150,000 fans on Facebook, half a million listeners on lastfm.com) and touring extensively, establishing themselves as Ireland’s most intense, incandescent live act.
Event Tralier:
www.youtube.com/watch?v=DSwfXHUNC6A
More about band detail:
www.superadmusic.com/god/
Contact Host
View hosts events