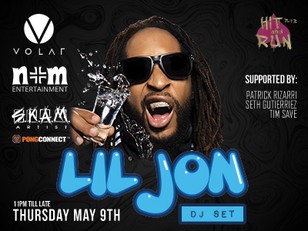 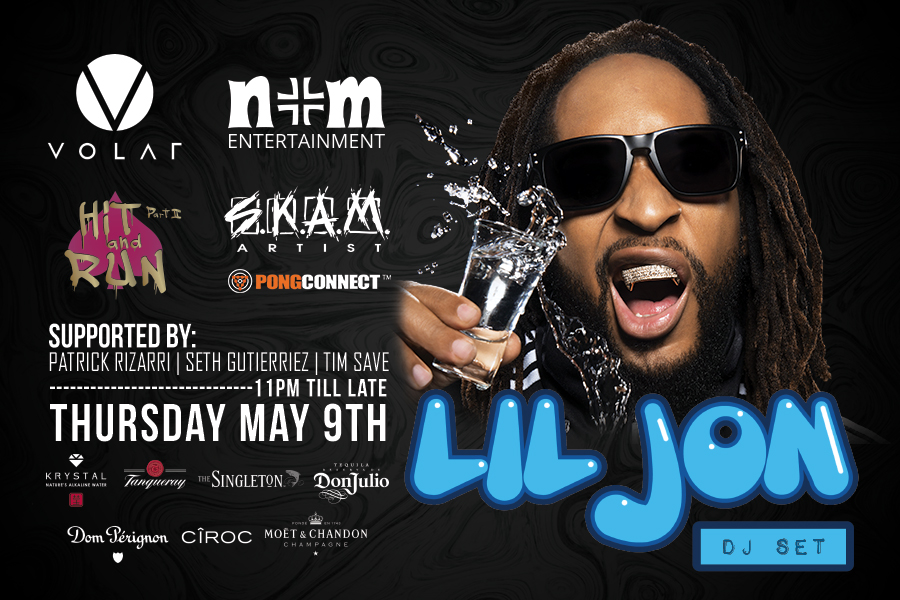 You’ve seen him before. You’ve heard him on the radio. You’ve partied with him all night long. And now he’s coming to Hong Kong to party with YOU. All roads lead to VOLAR for one unforgettable night.
The King of Crunk, LIL JON is going to perform a live DJ set at VOLAR on Thursday, May 09, 2019!
Hong Kong is truly gonna be CRUNK this Summer!
Needless to say, “IF YOU AIN'T COME TO PARTY GET THE F*CK OUT THE CLUB!!!!”

For the last decade plus, the words “Yeah,” “Ok,” and “What” have been synonymous with multi-platinum, Grammy award-winning artist Lil Jon. He has been one of the most prominent figures in music and pop culture alike, performing for hundreds of thousands of fans with Usher & Ludacris, Afrojack, Steve Aoki, Pitbull, TLC (on FOX’s American Idol), Yandel, LMFAO and Sydney Samson just to name a few. In 2014, Lil Jon proved once again he’s a powerhouse artist teaming up with DJ Snake for their smash hit “Turn Down For What,” which created a massive worldwide craze. The string of hit songs hasn’t stopped after that including “Bend Ova” feat. Tyga, “Prison Riot” with Flosstradamus, “Get Loose,” (out on DIM MAK) and recent singles “Live The Night,” with Hardwell “Savage,” with Borgeous and Riggi & Piros and “Take It Off” featuring Yandel and Becky G.

His success as a mainstay in the DJ-world is evident with a current residency at Hakkasan Nightclub (MGM Grand) along with Jewel Nightclub at Aria Resort & Casino. Previously, Lil Jon had a DJ residency for over five years at the Wynn/Encore (Surrender, Tryst, XS); even being named the Las Vegas Resident DJ of The Year. He has travelled the globe DJing worldwide in places such as, but not limited to France, Germany, South Korea, China, India, Dubai, London, Mexico and Australia.

Lil Jon continues to be a master at marketing and business as evident by being tapped by Bud Light [Fall 2015] to star in their #UpForWhatever commercial and campaign. He’s had an Oakley endorsement deal since 2005, became a Don Julio tequila brand ambassador, partnered with SOL headphones - which helped to launch SOL Deck by starring in the Radio Shack commercial in Fall 2013 – and has launched his own clothing line 2Vicious. His marketing chops came in helpful when cast on NBC’s primetime show Celebrity Apprentice (Spring 2011) quickly becoming a fan-favourite nationwide. Lil Jon was back on primetime television in the Spring of 2013 on the cast of Celebrity Apprentice All-Stars, where he came in 3rd and raised almost $200,000 for the American Diabetes Association.

Known best for his role in creating and popularizing the southern movement and lifestyle known as Crunk, Lil Jon delivered a string of regional hits (in the ’90s) with the East Side Boyz eventually becoming a national force in 2001 thanks to the tracks “Bia Bia” and “Put Yo Hood Up.” Crunk became so popular that Jon became a fixture on Chappelle’s Show and artists not directly connected to him (such as Mary J. Blige) began using the word Crunk in their own music. Jon helped usher the word ‘Crunk’ not only a national scale but worldwide. The Merriam-Webster Dictionary added the word into their book in 2007.

Lil Jon has a long list of platinum-selling productions, crafting groundbreaking hits for a diverse array of artists such as E-40, Usher, Ciara, The Ying Yang Twins, Ice Cube and more. He’s also worked with will.i.am, Miley Cyrus, Britney Spears, Bret Michaels, Travis Barker, Jennifer Lopez, Machine Gun Kelly, DJ Snake and many more. As an artist, he has sold millions of records as the frontman of Lil Jon & The East Side Boyz, whose smash hits “Get Low” and “What U Gon’ Do” have been among some of the biggest crossover hip-hop records. His songs have been featured in huge blockbuster movies and television shows including The Hangover, Neighbors 1 & 2, The Proposal, the Step Up franchise, FOX’s So You Think You Can Dance, Black-Ish, HBO’s Ballers, Horrible Bosses, NBC’s Parks & Recreation, The Ellen Degeneres Show, The Tonight Show with Jimmy Fallon, The Late Show with Stephen Colbert and many more.

His consistent hitmaking has earned him legions of fans from Los Angeles to New York to the Midwest and of course his native region, the South. This is no more evident as Lil Jon won BMI’s Songwriter of the Year award as well as scored eight Billboard Awards (for the two hit Usher tracks “Yeah!” and “Lovers and Friends”), a Grammy, a Radio Music Award, a BET award, two MTV Video Music Awards, and an American Music Award.