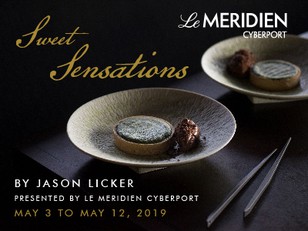 Le Méridien Cyberport is proud to welcome acclaimed pastry chef Jason Licker this May. Jason Licker, winner of “2014 Iron Chef Thailand” pastry edition is pushing creativity to another level by introducing his own style of Asian inspired, palate-challenging pastries to Hong Kong gourmets.

From May 3 to 12, 2019, Jason Licker is taking over the kitchens of Umami Japanese restaurant as well as Prompt all-day-dining restaurant to introduce his latest Asia fusion desserts and Asian- Accented afternoon tea menu.

Originally from Long Island, Jason started his first internship at Union Square Café in New York. The experience he has gained by working for the world-renowned Jean Georges Restaurant as a pastry cook had prepared him for his first pastry chef position at Metrazur for Charlie Palmer at the age of 23. After being appointed as the Executive Chef of the Shore Club in Miami Beach and the Peninsula New York, Jason left the United States for a life of professional adventures in Asia, helming the Executive Pastry Chef positions at the Westin Bund in Shanghai, the Venetian Macau Hotel and Resort, the JW Marriott Hong Kong and was the former corporate pastry chef of Cé La Vi restaurants (Hong Kong, Bangkok and Singapore). In 2014, Jason won the “Iron Chef” pastry edition in Thailand and in 2017, his self-published cookbook: Asian-Accented desserts by Jason Licker was nominated for a James Beard Award, which is claimed as the "Oscars" of the food world in the United States.

Jason creates desserts that reach all four-taste areas on the tongue – sweet, sour, salty and bitter, while combining textural contrasts and temperature differences. Influenced heavily by Asian flavours, Jason is introducing his delectable pastries with four a la carte desserts at Umami restaurant and six sweet items featured in the afternoon tea menu at Prompt restaurant.
One of the highlights of the a la carte dessert at Umami restaurant and bar being the Matcha & Coconut lime. This “instagrammable” dessert is prepared with ceremonial grade matcha cream, coconut-lime gelee and matcha cake. The creamy and crunchy textures of the matcha together with delicate coconut flavours create a perfect harmony between sweet and earthy.

Other newly released a-la-carte desserts include sensational options such as Vanilla & Mandarin Crème Brulee, Raspberry & Yuzu Cappuccino as well as Chocolate & Black Sesame Crunch Cake. Price at HK$88 +10% per piece from May 3 onwards at Umami restaurant and bar.

Aside from the a-la-carte menu, a special Sake pairing dinner will be held on May 3 to kick-start Jason’s takeover. To begin with, Kamasu sashimi, a tasty, mild flavoured fish sashimi will wake up one’s taste bud, followed by Uni with Kogomi tempura and grilled U.S Angus rib eye. A delectable grand final will include two signature desserts: Mini Raspberry & Yuzu Cappuccino and the sensational Matcha & Coconut Lime. Price at HK$888 net per person, including pairing with premium sake.

The second highlight will be the Mango Passion Fruit cake. This cake is inspired by the fragrance of the ripe fruits from Southeast Asia. The afternoon tea experience would not be complete without Jason’s incredible Scones. Other delicacies include Blackberry & Yuzu Meringue Tart, Matcha cream Puff, Crab & Papaya savoury Eclair and more. Price at HK$398+10% for 2 persons from May 6 to June 30, 2019 at Prompt restaurant. Chef Jason will make his appearance and interact with guests during the diner, elevating the experience further more.

Enquiries: 2980 7417 / prompt.lmc@lemeridien.com
*All tickets are non-refundable