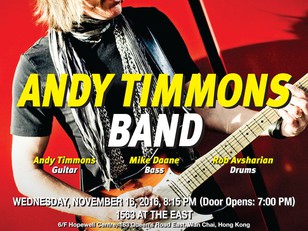 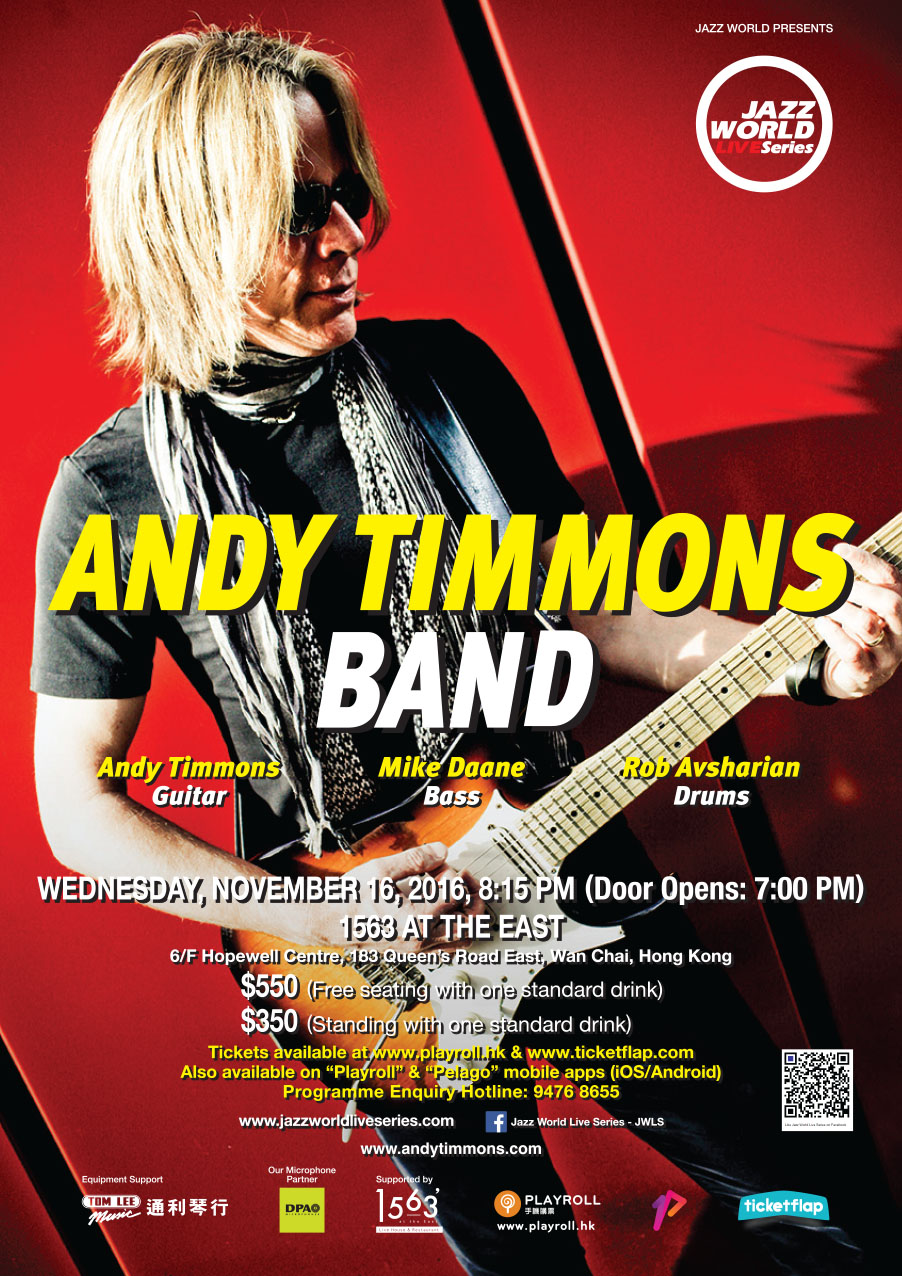 ANDY TIMMONS
As guitarist for pop-metal band Danger Danger, he toured the world opening for Kiss and Alice Cooper, sold over a million records worldwide, and had two #1 videos on MTV, plus amassing a discography that includes 7 solo releases that range from blazing guitar instrumentals, to blues, and even a Beatles/Elvis Costello-inspired collection of pop tunes.

As a session player, he’s been highly featured on CDs by drumming legend Simon Phillips, a live CD with Olivia Newton-John (Andy has been her music director/guitarist for several U.S. tours), two internationally acclaimed CDs by Kip Winger, recording sessions for Paula Abdul, Paul Stanley, and countless radio and television jingles. He has also played alongside many of his heroes such as Steve Vai and Joe Satriani (as a regular guest on their G3 tours in Dallas), Eric Johnson, Steve Morse, Mike Stern, Ace Frehley, Ted Nugent, and Pierre Bensusan, as well as some of his fave ’60’s singing stars such as the Beach Boys, Lesley Gore, and Gordon Waller (of Peter and Gordon fame!)

Andy’s musical career began in his hometown of Evansville, Indiana at the age of 13 with his first band, Taylor Bay. “Early on, I realized that making it in a rock band was such a long-shot, that I better figure out other ways of making a living playing guitar. I began reading about players like Steve Lukather and Larry Carlton who made their living as session musicians. This really appealed to me, since I really loved a wide variety of musical styles.”

The decision to pursue the studio scene led him to more serious music studies. He studied classical guitar for two years before moving to Miami to study jazz guitar at the University of Miami (largely because the Dixie Dregs, Pat Metheny, and Jaco Pastorius had all gone there). He eventually ended up in Dallas where he was very fortunate to get a foot in the door of a very good studio scene. In 1988, the Andy Timmons band was formed and he quickly gained a following in Texas. Around that time, Epic recording artists Danger Danger recruited him to finish their debut record, film several videos, and begin touring.

After 4 years in New York with Danger Danger, Andy returned to Dallas in 1993 to resume his studio career and the Andy Timmons Band. His first solo release, ear X- tacy, was released in 1994 to critical acclaim followed 1997’s ear X-tacy 2. He then released Pawn Kings (1997), Orange Swirl (1998), The Spoken and the Unspoken (1999), and And-thology 1 & 2 (2000). In 2001 Andy signed with Favored Nations and released his first international record, That Was Then, This is Now, a compliation of the first two ear X-tacy records and and five new tracks. Resolution (2006) marks Andy’s first full-length new release for Favored Nations.

Andy has been consistently voted a “Top 20 Favorite Guitarist” in most of Japan’s rock music magazine’s reader polls, as well as being voted “Musician of the Year” four years in a row in the acclaimed Dallas Observer Music Awards. He also has become one of the most respected and sought after clinicians representing Ibanez Guitars, touring the world on their behalf.