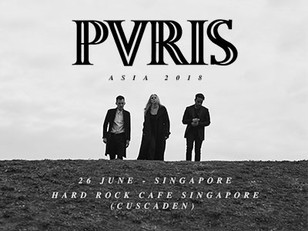 Iconic American Alt-rockers PVRIS to bring tour to Singapore for the first time! 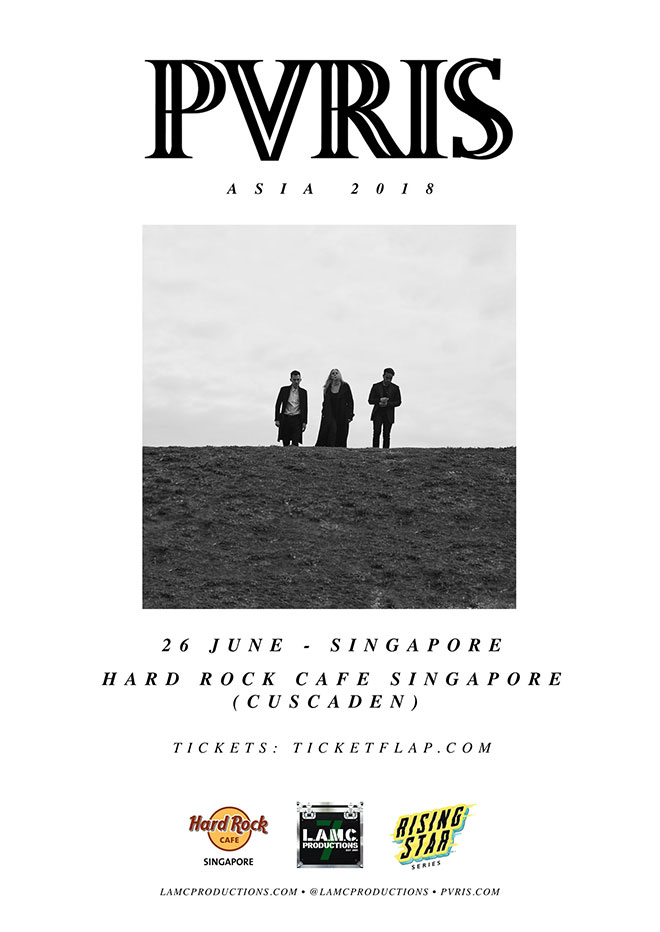 1. No admission for infant in arms and children below 12 years old. 2. Children 12 years and above must purchase a ticket for entry. 3. Admission is subject to tickets produced at the entrance. 4. Professional Cameras / DSLRs are strictly not allowed. Only mobile phones are allowed. 5. There is no wheelchair access at this venue.

LAMC Productions is excited to announce that up and coming Alt-rockers, PVRIS, will perform in Singapore, on Tuesday, June 26, 2018 at Hard Rock Cafe Singapore (Cuscaden), as part of our Rising Star Series.

Currently undertaking an extensive UK & Europe tour, the band took the Coachella Stage last month and is ready to rock Singapore for the first time!

"We are stoked to play Singapore for the very first time and bring our album All We Know of Heaven, All We Need of Hell to fresh ears! " - Brian MacDonald, PVRIS

On the road in support of their current album, All We Know Of Heaven, All We Need Of Hell, PVRIS, originally named PARIS, is a Boston-based electro-rock trio comprises of vocalist Lynn Gunn, guitarist Alex Babinski and bassist Brian MacDonald.

They were originally a metalcore band but in recent years, are better known for their ability to blend dreamy electronica with dark, beat-heavy rock.  The band, has over the years, built a loyal tribe of followers worldwide since their 2013 self-titled EP release. The band signed to Rise Records soon after and hit critical acclaim with their 2014 debut album, White Noise, featuring “You and I”.

Since then, the band has toured with Muse, 30 Seconds to Mars, Fall Out Boy, Mayday Parade, Pierce The Veil, Sleeping with Sirens and more!

In 2015, PVRIS won the Relentless Kerrang! Awards 2015 for Best International Newcomer and has also took home the award for Breakthrough Band as part of the Alternative Press Music Awards. 2016 was a crucial year for the band as they set out on their first American headlining tour and also played at Chicago's Lollapolooza for the first time.

In August 2017, PVRIS dropped their sophomore album, All We Know Of Heaven, All We Need Of Hell, to rave reviews from critics and fans alike. The album is home to ten tracks including “Heaven”, “Half”, “What’s Wrong”, “Winter” and “Anyone Else”.

This show is not one to be missed!