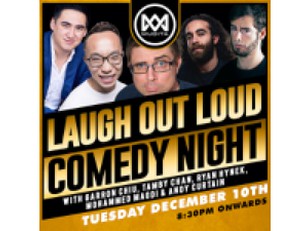 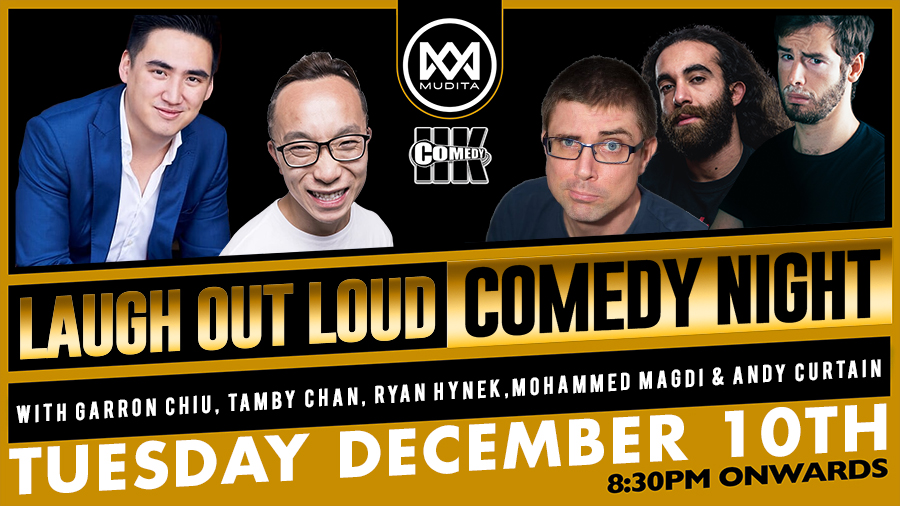 It’s been a very HOT minute since our last Laugh out Loud Comedy night in summer but we are back with its 6th edition this December with a line-up of Hong Kong’s funniest comedians featuring Garron Chiu, Tamby Chan, Ryan Hynek, Mohammed Magdi & Andy Curtain.

Enjoy 50% off standard drinks throughout the whole show!

Garron is an American-born standup comedian based in Hong Kong

On stage, you will find him trying to justify his ego, talk about his myriad of doomed relationships (and his current successful one), and try to figure out whether he is too Asian or not Asian enough. All this while failing to run from his stereotypes and making people laugh along the way.

After immigrating to Canada at the age of 7, Tamby developed his sense of humour as a social defence mechanism in lieu of speaking fluent English. He has been continuously refining his comedic voice through trial and error ever since.

Tamby was the winner of the Bangkok division of the Magners International Comedy Competition in 2018 and placed 2nd at the regional finals. His unique perspective, incisive write an adequate stage presence has made him a popular headline act around Asia. Tamby also founded and runs the ROFLMania all-star comedy showcase, HKG Storyteller Show and BUSHIROAST roast battle tournament

Ryan is a Chicago native who's been yucking it up on the Asia comedy circuit since 2007. He's had the fun of taking his jokes on the road from Chicago, Hong Kong, Singapore, Philippines and beyond. He's been a finalist of the Hong Kong International Comedy a record 6 times and is a regular headliner around Asia.

MOHAMMED MAGDI
Based out of Shanghai, China. Mohammed Magdi has been in the Asian comedy circuit for more than 5 years, building a name for himself, headlining rooms around Asia and working with comics like Mark Normand, Paul Ogata, Ari Shaffir and Sean Patton. Mohammed had also toured with his show Brown Mirror in 12 cities across 7 countries since summer 2018, ending the year with a massive gig opening for Gad Elmaleh at a 1000 seats sold out show in Shanghai, and then opening for the legendary Jim Gaffigan in Shanghai in March 2019.
Mohammed is the winner of the 2017 Bangkok International Comedy Festival and two times finalist of Hong Kong International Comedy Festival. He's also been featured on Comedy Central Arabia.

Born in Melbourne, Andy moved to Shanghai in 2009 chasing the modern Australian dream of not living in Australia.

Over the last 8 years, he’s toured through 30 cities in China, HK, Melbourne, South Korea and the US. He’s worked with Ari Shaffir, Russell Howard and Eddie Izzard. And he performs in Mandarin… 你好 indeed.

He also hosts the weekly podcast Stuck In The Middle.

His current show “My Wife, The Russian” sold out in Shanghai and had a sold-out run at the Melbourne International Comedy Festival in 2017.