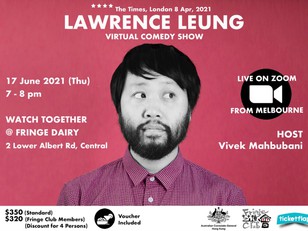 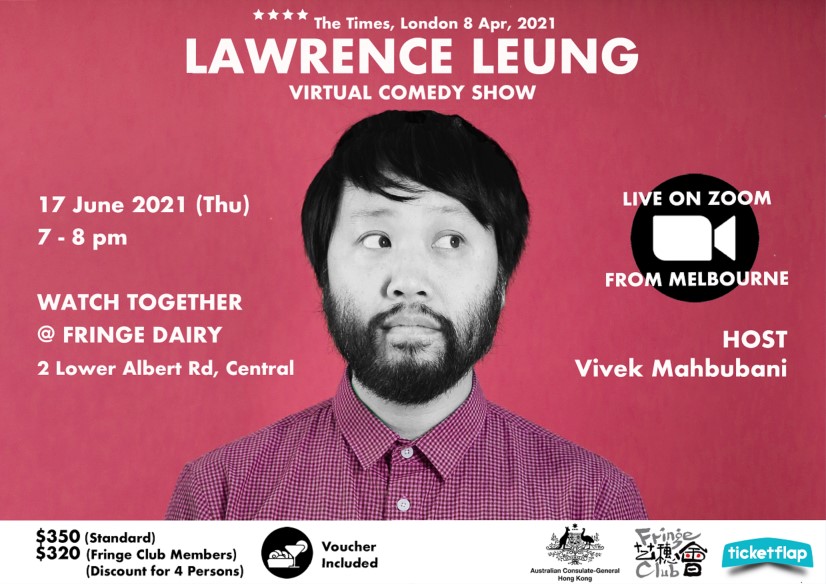 Lawrence will perform an excerpt from his online show “Connected” which was recently part of The Melbourne International Comedy Festival’s digital program and has also been performed in association with London’s Soho Theatre.

Watch Together at Fringe Dairy!

You will interact with Lawrence on Zoom and Vivek at the Dairy – A live online show that takes place on two sides of a screen. This unique interactive comedy show gives you the best experience at the only cabaret venue in Hong Kong.

'Casts its spell with such ingenuity and charm that you’re surprised and slightly disappointed when it ends. Smart fun, suitable for all ages.'  ★★★★ The Times, London 8 Apr, 2021

Lawrence Leung is a multi-award winning Australian comedian who has been performing internationally since 2001. He is known in comedy circles for his personal storytelling style, “social experiments”, quest-based solo shows and obsession with obscure or nerdy topics like puzzles, 80s childhood icons, con artists, psychology and ghosts. His TV work includes Lawrence Leung’s Choose Your Own Adventure and Lawrence Leung’s Unbelievable for the ABC and starring in Action/Comedy “Maximum Choppage” for ABC2. He is also a past winner of the Directors' Choice Award at the Melbourne Magic Festival.

He appeared on Ten’s Offspring as Dr Elvis Kwan and other appearances include Newton’s Law and Top of the Lake: China Girl, My Life is Murder and the new ABC/Netflix series Why Are You Like This?

Lawrence is a multi award-winning comedian, actor and screenwriter. He’s best known for his TV work including the AFI-nominated Lawrence Leung’s Choose Your Own Adventure and Lawrence Leung’s Unbelievable for ABC1 and the ABC2 action/comedy Maximum Choppage.

He’s written and presented pieces for SBS's The Feed, ABC Catalyst and other appearances include Newton’s Law, My Life Is Murder,Top of the Lake: China Girl, as well as playing an awkward doctor named Elvis on the hit Australian series Offspring. Lawrence's solo show Sucker was adapted into a feature film starring Timothy Spall.

Lawrence’s live shows have played in theatres and festivals across Australia and around the world. So far in 2021 he has performed the online interactive show Connected via The Melbourne International Comedy Festival and London’s Soho Theatre  and appeared in the ABC/Netflix comedy Why Are You Like This?

Vivek Mahbubani is a Hong Kong-bred bilingual stand-up comedian performing in both Cantonese and English.

Having been crowned the Funniest Person (in Chinese) in Hong Kong in 2007 followed by his victory in the English category at the Hong Kong International Comedy Competition in 2008, Vivek has had the opportunity to take his sense of humor all over the world including Hong Kong, China, Macau, Singapore, Malaysia, Philippines, Thailand, Sri Lanka, India, Australia, Canada and USA.

Having been ranked as the top comedian in Hong Kong, in 2014, the World Famous Laugh Factory in USA ranked Vivek as one of the top 10 comedians in their Annual Funniest Person in the World Competition.