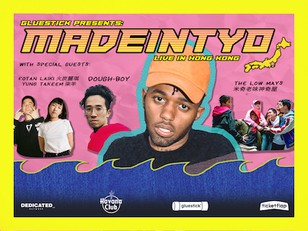 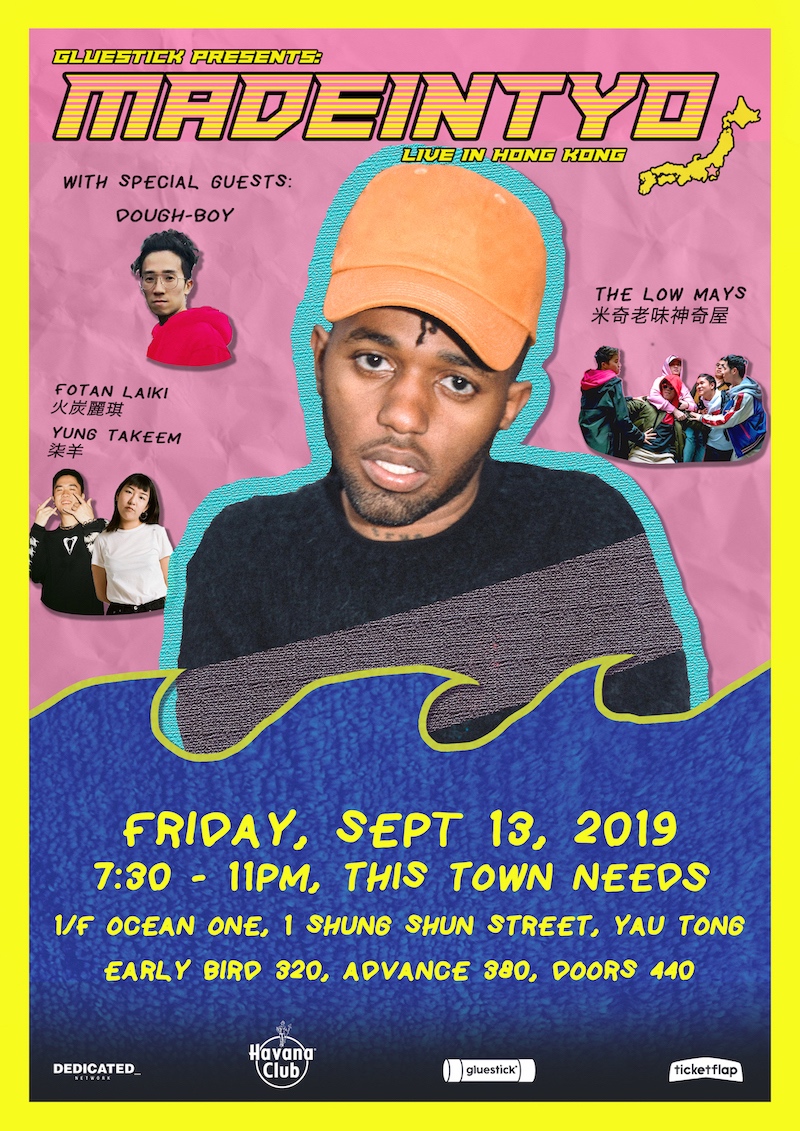 Following a successful bout with the mega-talented Denzel Curry, we are excited to announce to announce our second hip-hop show: MadeinTYO live in Hong Kong! Like Denzel, it will be the "Uber Everywhere" rapper's first-ever concert in Hong Kong. Opening for MadeinTYO are popular local acts Dough-Boy, Fotan Laiki, Yung Takeem & The Low Mays. If you like rap, hip-hop, and trap music, this is a definitely a night you do not want to miss!

MadeinTYO (pronounced “Made in Tokyo”)is a rapper and songwriter from Atlanta, Georgia. Responsible for mega-hits such as "Uber Everywhere," "Skateboard P," "IWant,” and "Ned Flanders," the rapper has collaborated with the likes of rap music's biggest superstars such as Travis Scott, A$AP Ferg, Big Sean, 2 Chainz, G-Eazy, Bhad Bhabie, Carnage, J Balvin, Famous Dex, Tory Lanez, and others. The aforementioned hits have generated well over hundreds of millions of views across all streaming and video platforms, and he currently has nearly 5 million monthly listeners on Spotify. He is an XXL Freshman alumni, appearing alongside the late XXXTENTACION, Playboi Carti, A Boogie, Aminé, Ugly God, and more for its 2017 edition. He was also a special guest for Billie Eilish's "When We Fall Asleep" World Tour in Europe. Most recently he was featured on Chance the Rapper's debut album alongside DaBaby on the song "Hot Shower." MadeinTYO has been featured on the biggest international media including Complex, HYPEBEAST, Billboard, Vice, Pitchfork, The Fader, etc.

MadeinTYO was born in Honolulu, Hawaii as a military brat, moving all over the US until he settled in Yokosuka, Japan. Upon finishing high school, MadeinTYO moved back to Atlanta, Georgia with his older brother 24hrs. He is influenced by Kanye West, Pharrell, M.I.A., and Gucci Mane. Since the release of "Uber Everywhere" in 2015 (premiered by HYPEBEAST),

MadeinTYO has released 2 EPs, 3 mixtapes (including the widely successful 'You Are Forgiven' and 'Thank You, Mr. Tokyo' in 2015), and one studio album titled 'Sincerely, Tokyo' in 2018. He is signed to his own label Private Club Recordsand has been distributed by Warner Records.

Dough-Boy is this generation's most well-known rapper in Hong Kong. Signed to Warner Music Hong Kong/F Records, Dough-Boy and his crew Bakerie has an impressive list of accomplishments with some of his latest hits “望穿抽水,” “LI KA SHING,” and “狂舞吧” garnering over a million streams each. Dough-Boy has also collaborated with big name Chinese rappers

and artists such as MC Jin, MC HotDog, Tizzy T, Jackson Wang, Lexie Liu, Masiwei of Higher Brothers, Justin Lo, MJ116, and many more. Riding on a newer wave of the local hip-hop scene, Dough-Boy has one of the strongest regional followings across Hong Kong and Mainland China and most would consider him to be the crown jewel of the current hip-hop generation. He has been featured in numerous magazines and media including VICE, Noisey, HYPEBEAST, Yoho!, amongst others. This year alone, he collaborated with revered brands such as Chanel, adidas, Vans, CLOT, Places + Faces, and our official partner for the night, Havana Club.

Fotan Laiki is a female rapper/underground icon from Hong Kong. Having graced the album cover of one of Hong Kong’s biggest indie bands My Little Airport back in 2016, she has now made her mark in the music scene with big hits such as the eponymous “火炭麗琪,” and “唔X鐘 意 (ft. Yung Takeem). '' Coincidentally, “火炭麗琪” is a 2017 remix of MadeinTYO’s “I Want” with local rapper and Wild$tyle Records founder YoungQueenz, and this has since racked up over two million views. Fotan Laiki will perform with Yung Takeem, another Hong Kong-based rapper, whose tracks “保持正面” and “專一的f**kboy” have gained over half a million views each. Together, they have become some of Hong Kong’s rising cult underground rap sensations.

The Low Mays are one of Hong Kong’s biggest young rap crews. Often known as “troll” rappers, the hip-hop group became famous for its over-the-top and profane topics such as flat earth theory and having extreme wealth. Some of their biggest hits include “富林太空站 F.S.S.,” “180K (DLLM Remix),” and “劈友街 PEKYAU STREET” — all of which have gained a few hundred thousand streams and views each. Initially started out by six students in 2015, The Low Mays has now thrown multiple shows per year with 600-1000 capacity turnouts. Their most recent concert with Bakerie at MacPherson Stadium was sold out as well, boasting over 1500 attendees. Their collaboration with the Hong Kong government initiative “清潔龍阿德 Keep Clean Ambassador Ah Tak” during their Clockenflap 2018 performance also attracted massive public attention.