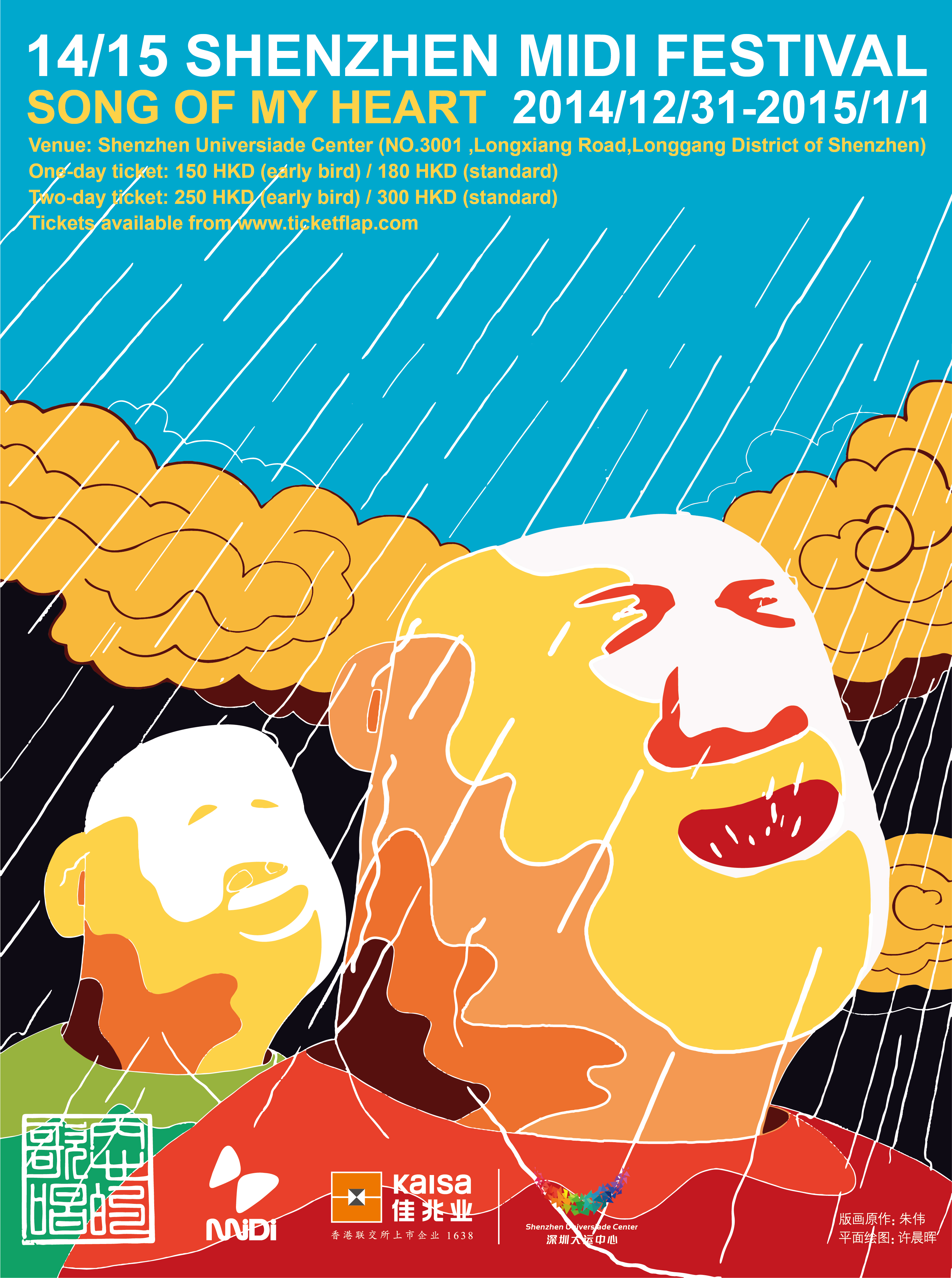 Being the last of 2014 and the first of 2015, the Midi Music Festival at the brink of the New Year in Shenzhen will be held between Dec. 31st and Jan. 1st at the Universiade Center Square in Longgang District, Shenzhen. At this phenomenal New Year's celebration, the biggest in the south Chinese region, 50 domestic and international artists will perform on the stages Tang, Zhanguo and Kid's Midi. Beside all this, the 6th Chinese Rock Midi Awards will also be opened on the 1st day of the new year on Tang Stage. For the whole year of 2015, the motto of Midi Festival will be "The Chanting of the Inner Heart" and its theme art is designed by print artist Zhu Wei who also contributed to theme designs of 2006's "20 years of Chines rock" and 2012's "PM 2.5".

By now, the Midi "Brick" Award's nominations are all announced, multiple nominated Miserable Faith and Tongue already confirmed to play on Shenzhen New Year's Midi Festival. And the very Second Hand Rose who won the 2012's "Grant Jury Special Award" will be debuting on Shenzhen Midi Festival this time. Muma keeps on taking us onto the wonderful journey of the "electric sonic lights" experience. Other participating bands on Shenzhen Midi also include "new outlets by veterans" such as Wanzhong by former Ordnance frontman and Lone by former Joyside members Bian Yuan, Liu Hao, Fan Bo and Guan Zheng. Popular artist of recent years like folk singer of the Yi People Moxi Zishi, Zhao Wei's Finger Walker & Shang Biao, Island Mood, Lost Train, Hedghog, The Big Wave, Easy Lover, etc. will join forces with those old friends of Midi Festival, the likes of Reflectors, Ego Fall, Buyi, Wangwen, they all will deliver a gigantic party for a rocking New Year for a gazillion of Midi fans.

Project Ace, formed by six experienced musicians from Guangdong and Hongkong area, metalcore band Fear Forest who participated on Shenzhen Midi in 2013, the active touring band The Muff of down south, screamo/post-hardcore outfit Insecticide and heavy rockers Luktomo from Guangzhou, indie band Laofoye from Zhuhai and Shenzhen's own heros Summer Grass of Longgang District will present the local rock charm as the hosting party so to speak.

Among the line up there is also Fall To Fly from Macau, new school punks Defiant Scum from Hongkong, joint by fellow artists on the heavy wing like Chochukmo, Mothmen and Evocation. From overseas, there will be UK's pop punk new finest The Bottom Line and hardcore punks Clowns from "down under".

Still remember the Little Brats Clan who held the Kid's Midi Stage in awe last year? After one year of practice, the kids in average at age of 8 already start to prepare a nation wide tour with the new album, appearing on stage with brand new songs. After their paying tribute to Metallica last year, also Gu Tang Experimental Percussion Unit will bring surprises both to little ones and parents. "Older" bands like Meat Sucks, Bubble Gum Blow will deliver brilliant live sets and play their parts as role models in the interactive game "Dora & the Ninja Turtles" with all kids. Other bands like Tao Times Affro Drums Unit, Drum Tease Bros, Green Blues, Stars, Vector Kids, Dream Baby, Blue Fantasy, Twister will bring a fresh breeze of youthfulness, embrassing the curiocity of those little ones in the audience towards modern music instrumentation.

Winter is coming, Midi Music Festival will arrive at the beautiful south on rocking rails. Together with the 6th Midi Awards Ceremony, 14/15 Shenzhen New Year's Midi Festival is closing in, awaiting the warmly get together with Midi fans once more, count down in unison for the upcoming 2015!
Contact Host
View hosts events