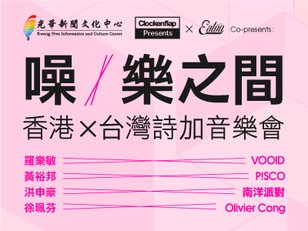 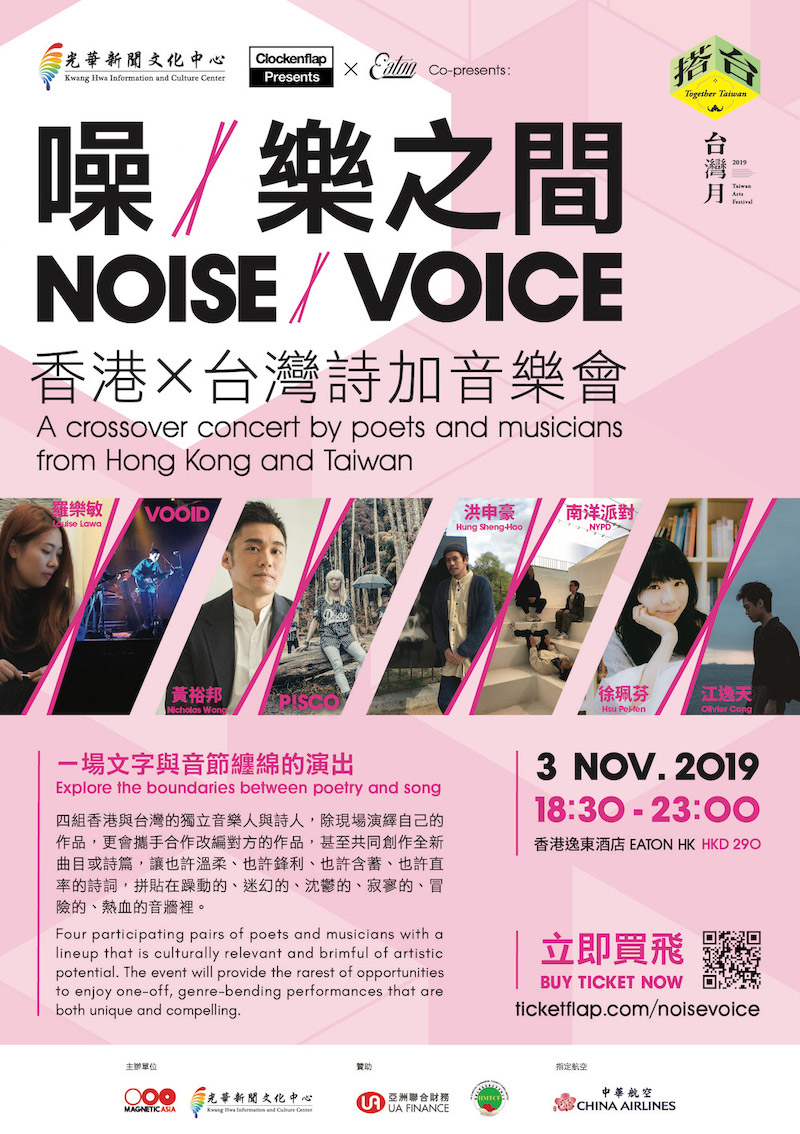 NOISE/VOICE
A crossover concert by poets and musicians from Hong Kong and Taiwan.

NOISE/VOICE, at its core, the focus is to empower independent musicians and poets to collaborate, challenge each other creatively and create inspired new works of art as a result of their combined endeavour.  For the audience, the event will provide the rarest of opportunities to enjoy one-off, genre-bending performances that are both unique and compelling. Expect the boundaries between poetry and song to be explored and exploited in a one night only evening of unmissable, live entertainment.

Online ticketing will commence on 18 Sep 3pm at Ticketflap.com/noisevoice

Hung Shenhao was born in 1982 in Taipei and has been a member of the bands Fall of this Corner, Touming Magazine, and Vooid. He is the founder of the label Petit Alp Records and the physical shop PAR Store. His journey of exploration continues.

NYPD is a five-person band straight out of the underground neighborhood of Tai Kok Tsui in Hong Kong. Blending full throttle chaos with confrontational street wit, NYPD mixes their music with an irrepressible joy of their own. Their songs are brash, loud and funny; inspired by their surroundings, they draw influences from late night snacks, idol Teresa Teng, and second hand clothing shops alike.

Hsu Pei-Fen was born in Hualien and graduated from the Institute of Taiwan Literature, National Tsing Hua University. She is a winner of the Lin Rong San Literature Award, the National Tsing Hua University Yue Han Literature Prize, and the Chou Meng-tieh Poetry Prize, and is a 2019 resident artist of the Vermont Studio Center. She has published several poetry collections, including In the Black Hole, I See My Eyes and Flying Through the Darkness. She is also the translator of T.S. Eliot’s Old Possum’s Book of Practical Cats.

Born in December, singer-songwriter Olivier Cong appears afflicted with the icy gloom of winter, forever contemplating the meaning of life. While studying in the UK, he articulated his repressed emotions into the song “Searching for the Raven”, igniting his desire to write and perform music. His style is predominantly influenced by folk, blues and alternative rock. These days, he can often be found performing in bars with his guitar, searching for those who will close their eyes and perk up their ears for him.

Louise Law is the head of Spicy Fish Cultural Production, specializing in editing, translating, writing, and the planning of literary events. She was formerly the editor of the literature magazine Fleurs des lettres and the festival manager of the Hong Kong International Literary Festival. She is an Award of Commendation recipient at the 3rd Lee Sing-wah Modern Poetry Award for Youth, the author of the collection As If: A Book of Poetry, and a participant in the 2018 Singapore Writers Festival.

Nicholas Wong is a Hong Kong-based poet who writes exclusively in English. In 2016, he became the first person from Asia to win a Lambda Literary Award with his poetry collection, Crevasse. A Chinese translation of the award-winning poems was published in 2017. Other awards he has received include the 2016 Award for Young Artist at the Hong Kong Arts Development Awards, the 2018 Renaissance Award (Literature - Pure Literature) awarded by the Renaissance Foundation Hong Kong, and the Australian Book Review’s 2018 Peter Porter Poetry Prize. He was the resident poet at the 2018 Taipei Poetry Festival and has contributed to the Manchester International Festival and a cross-media art project at the Solomon R Guggenheim Museum in New York.

Touted by fans as “the dancing rock band that tests the limits of muscle endurance,” P!SCO is a five-person band that loves interacting with its audience. From simple hand gestures to yelling slogans to massive singalongs, P!SCO encourages all fans to participate, creating a style of performance never before seen in Taiwan. Experience the band’s unique, eye-catching stage presence, undefinable music genre featuring a diverse mix of rock, electronic and classical, and non-stop approach to performance that guarantees no dull moments. At every show, P!SCO also hangs a rainbow flag to voice its support for the LGBT community and other disadvantaged minorities.