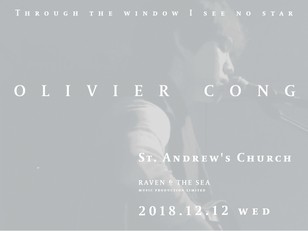 THROUGH THE WINDOW I SEE NO STAR 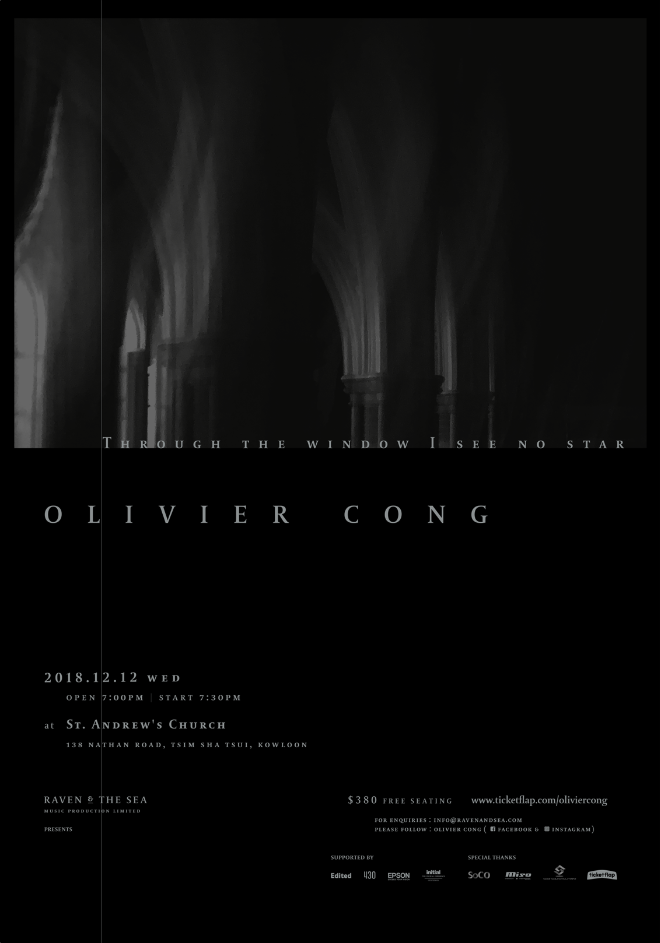 “Through the window I see no star

Though deeper within darkness

Is entering the loneliness”

The Thought–Fox by Ted Hughes

【THROUGH THE WINDOW I SEE NO STAR】

Setting foot into the century old St. Andrew’s Church, Olivier and his team will have you experience something new and personal through music and visual work in a sacred space.

In a way, Olivier Cong’s music betrays his upbringing.  A Hong Kong native born to a family of musicians, Cong studied piano ad violin before moving to the UK to study psychology.  It was life in an utterly different atmosphere filled with interesting people that propelled him to pursue music and follow in the footsteps of influences such as Leonard Cohen and Tom Waits.  With orchestral arrangements and poetic lyrics, Cong paints scenes of wooded serenity far from the bustling streets of Hong Kong on “The Day We Walked Into The Woods, Without A Map”.  From his first composition “Searching For The Raven” to his first completed collection of songs, Cong lays bare his growth as an indie artist on a personal path.  Upon his return to Hong Kong, Cong opened his own studio and music label with his friend, Terry Yip, “Raven & The Sea Music Production”.  He then collaborated with renowned artist and producer Adrian Chow to refine his work.  The result of their sessions - “A Ghost & His Paintings” - chronicles Cong’s three years abroad and reflects on the thoughts and feelings of a generation.  With the high production quality of his debut album “A Ghost & His Paintings”, Cong gained iTunes's support and became the first artist from Hong Kong to have the "New Artist Spotlight", his debut album also topped the Apple Music Alternative chart.