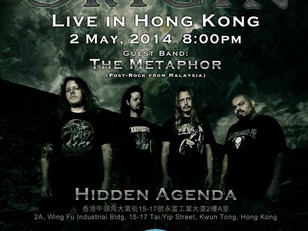 One of the most intense and technical forces of the contemporary death metal world, ORIGIN, have returned to stake their claim as the leaders of metal’s new wave of extremity with their fifth studio effort entitled Entity. As expected, the death grind trio of Flores, Ryan, and Longstreth continue to churn out frantic hell paced grids of metal torment, but now further compliment the arrangements with a new found propensity for churning grooves and the hook laden approach that first reared its ugly, but accessible head on the bands 2007 offering, Antithesis. The band once again returned to Chapman Recording Studios, in Lenexa Kansas to work with long time engineer and friend, Robert Rebeck. As stated multiple times in the past, Origin proves once again, that they stand head and shoulders above their peers.
ORIGIN was formed in Topeka, Kansas in 1997. The original line up consisted of Paul Ryan, Jeremy Turner, Clinton Appelhanz, George Fluke, and Mark Manning. With a solid line up in place, the band completed a 4 song demo in 1998 entitled A Coming Into Existence and played their first show opening for Suffocation in May of the same year. As the band continued to hone their skills and line up(enter John Longstreth on drums / Doug Williams on bass), more shows followed and the band gained a reputation for going toe to toe with legendary acts such as Napalm Death, Nile, and Gorguts. An appearance at November to Dismember Metal Fest in Texas prompted Philadelphia based Relapse Records to sign the band in December of 1999.
As a newly signed recording act for Relapse Records, the band entered Studio One in Racine Wisconsin to record its self titled debut in 2000. ORIGIN played the March Metal Meltdown in New Jersey, and for the first time the band hit the road on a full length tour entitled "Contamination 2000" with label mates Cephalic Carnage and Exhumed. Shortly after, the band hit the road with Vader on the Death Across America tour. "November to Dismember" in Orange County, California was a real eye opener to the band, as 1,500 people and a very shocked Relapse Records staff bared witness as the band revealed their new vocalist, James "General" Lee.
Not content to sit idle, ORIGIN advanced with yet another U.S tour, this time alongside Candiria, Cryptopsy and Poison the Well. ORIGIN secured new bassist Mike Flores after Doug Williams decided to make a departure from the band to concentrate on family. A small headline tour ensued before beginning work on the next album. The band worked obsessively in frozen winter climates in a severely under heated garage for weeks on end to create the now classic, Informis Infinitas Inhumanitas record. The album displayed the revamped quintets firepower with a frighteningly powerful leap forward in brutality, technical dexterity and writing prowess. New arrangements such as Larvae of the Lie, Implosion of Eternity, and Portal would soon become classic live staples for the band.
Immediately following the release of Informis Infinitas Inhumanitas, ORIGIN hit the road as part of a summer metal tour with Nile, Arch Enemy and Hate Eternal. As this tour successfully concluded, Jeremy Turner retired from the band and Clinton Applelhanz was brought back into the fold on guitar to carry on touring. A tour with Immolation, Vader, and The Berzerker was executed and immediately followed by a small headline tour with All That Remains, Scar Culture and Crematorium. This live trek would end with the departure of Longstreth.
The band played its first show with a new line-up, (drummer James King and newly re-aquired guitarist Clinton Applehanz) in September 2003 in Topeka, Kansas. The show was video taped and used as footage for the "Portal," music video. The band then landed a headlining west coast tour in January 2004 with Uphill Battle. In the summer, ORIGIN toured the Midwest, playing the Milwaukee Metalfest 2004 and The Texas Death and Grindfest with Soilent Green and Kill the Client.
As of spring 2006, James King and Clint Appelhanz had left ORIGIN to focus on Unmerciful with Jeremy Turner and Tony Reust. In April, Longstreth returned to ORIGIN, and the band embarked upon a highly successful 9 week summer headlining tour across North America. With Paul Ryan performing all guitar parts on this tour, the band solidified itself as a (live) quartet and has remained in this format to this day. The sets were very long, dense, and brutal as Origin played up to an hour and a half each night.
On February 8th 2007, ORIGIN finally played in Europe with label mates Misery Index and Necrophagist. A newly signed, fellow Topeka band called Diskreet joined this tour as an opener. As the band began working on its 4th album, Jeremy Turner rejoined ORIGIN and the band was back to what has been referred to as "the classic Informis lineup". On the album, the clear differences between the writing styles of Ryan and Turner can be easily picked out.
The following album Antithesis, was released April 1, 2008, and peaked at #21 on the Billboard Top Heatseekers chart. The band released a music video for the song "Finite" on May 23, 2008 and was shown on MTV2’s Head Banger's Ball shortly after. An appearance on the 2009 Summer Slaughter U.S Tour as well as tours with Misery Index and Abysmal Dawn followed.
In 2010, the band signed to German-based Nuclear Blast Records and recorded their debut for the label in November. Soon to be unleashed upon the world this summer is their fifth opus, the savage Entity. Be prepared to witness ORIGIN in their finest hour.
Catch the band, with their new frontman, Jason Keyser on tour with Hate Eternal, Vital Remains and Abysmal Dawn in North America. Look for ORIGIN on tour in Europe, South America, Mexico, Asia, Australia and the rest of the world in 2011 and 2012.
Contact Host
View hosts events