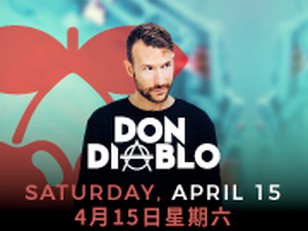 Number 15 in DJ Mag's ranking (2016), Don Diablo is headed your way to perform at Pacha Macau!

With over one hundred million views on YouTube, Dutchman Don Diablo is rapidly expanding his discography in between his global touring schedule headlining nearly every major club and festival around the world, becoming one of the most in demand DJs of our time.

He's collaborated and produced with artists including Kelis, Alex Clare, Diplo and Tiësto while adding names such as Madonna, Ed Sheeran, Rudimental and many others to his portfolio. His record label "Hexagon" was awarded the "best new label of the year" standing in the no.1 position on Beatport for nearly 2 weeks!

Make way for Don Diablo as he makes his Pacha Macau debut!

Join us on Saturday, April 15 at Pacha Macau Doors Open At 10PM