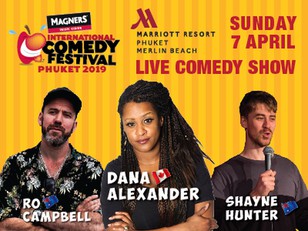 with RO CAMPBELL and SHAYNE HUNTER 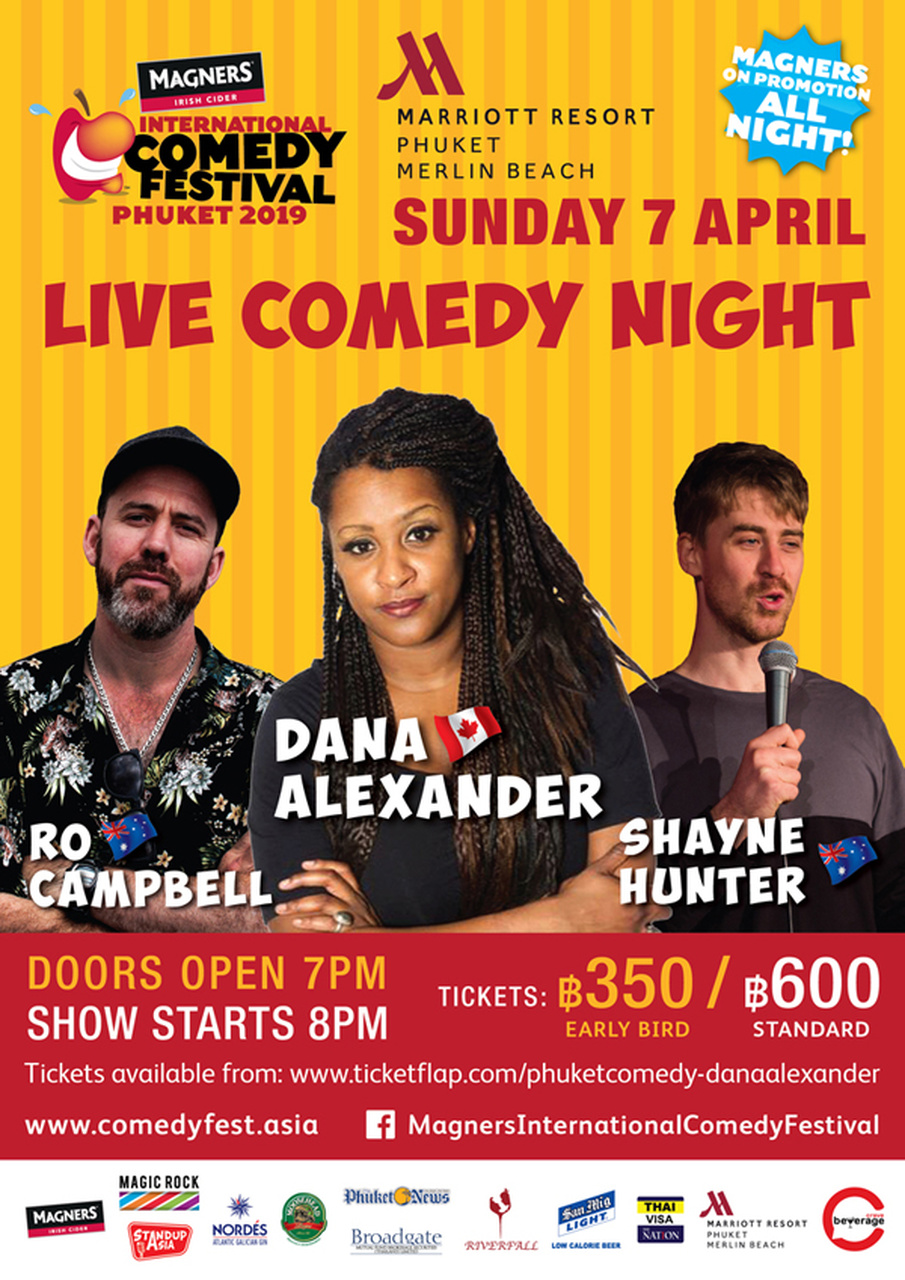 with RO CAMPBELL and SHAYNE HUNTER

Announcing the MAGNER’S INTERNATIONAL COMEDY FESTIVAL in Phuket this April

DANA ALEXANDER draws her fearless material from her diverse lifestyle and raw life experiences.  With an original and hilarious outlook, ALEXANDER began her comedy career at the age of 18, quickly being voted as Best Discovery by Canada’s Now Magazine.  Before long, she began touring nationally with Yuk Yuk’s Comedy Clubs, allowing her to complete numerous television galas and radio spots.  In 2011, ALEXANDER moved to the UK where she premiered her one woman show at the Edinburgh Fringe Festival, receiving rave reviews and nominations including Best Comic and Best International Act from Chortle and Black Comedy Awards.  Soon after, she was featured on BBC television programmes, including Russell Howard’s Good News, Edinburgh Comedy Fest, and The Culture Show, and Canada’s popular stand-up show, Comedy Now.  ALEXANDER has been named in the top 10 comedians three years running by Now Magazine and has performed in more than 40 countries worldwide.  Don’t miss this ‘smart, irreverent and revolutionary’ (Now Magazine) powerhouse.

RO CAMPBELL found himself first immersed in the world of stand-up when rigging venues at Edinburgh Fringe Festival 2004.  After a 12-year hiatus from the acting stage, he decided it was time to return.  Since then, the UK-based Aussie has wowed audiences in over 40 countries with his relentlessly entertaining brand of cheeky slightly dark humour that ‘shoots straight to the funny bone’ (Adelaide Fringe).  CAMPBELL has made numerous solo show appearances, including Glasgow International Comedy Festival, NZ Comedy Festival, Adelaide Fringe, Perth Fringeworld, Melbourne International Comedy Festival and has performed at the last 12 Edinburgh Festivals.  He has made The Scotsman’s pick of Best Jokes of The Fringe and has been crowned Scottish Comedian Of The Year.  CAMPBELL has supported Live At The Apollo star Tom Stade and Edinburgh-award winner Russell Kane on numerous tour dates, opened for Kevin Bridges, and acted in the 1988 Emmy-award winning film, Captain Johnno.  Don’t miss this ‘great stand-up and exceptional story teller’ (The Skinny).

SHAYNE HUNTER is an Australian comedy maverick.  In 2010, HUNTER was selected for the prestigious Melbourne International Comedy Festival Comedy Zone.  He toured every capital city, constantly sharpening his stand-up skills on the road, becoming one of Australia’s most original and interesting voices.  Three years later, HUNTER decided to step back from the mic and focus his energy and voice as a political activist.  Last year, HUNTER made a powerful return to the comedy circuit debuting his show, Blaze Against The Machine, at the Brisbane Comedy Festival, Melbourne International Comedy Festival, and Sydney Comedy Festival.  HUNTER’s smart, poignant, and socially aware comedy pushes boundaries in any setting that is a backdrop for his biting, big-laugh perspective on life.  It can be vicious, it can be raw, but it’s always hilarious.  Don’t miss one of the cleverest comedians on the circuit, who will not only make you laugh, but will make you think.

Do not miss DANA ALEXANDER (CAN), RO CAMPBELL (AUS), and SHAYNE HUNTER (AUS) on stage this April at Marriott, Merlin Beach.  Early bird tickets are on sale now from 350 THB or 600 THB at the door.  Get your tickets today on TicketFlap: www.ticketflap.com/phuketcomedy-danaalexander

STANDUP ASIA is a part of Magic Rock, a Singapore-based company that organises comedy festivals and other events throughout Asia.  It has brought international headliner comedians, such as Doug Stanhope and Bill Bailey, to vibrant, multicultural audiences across the region.  Event sponsors include Hong Kong Tourism Board, Singapore Tourism Board, Marina Bay Sands Singapore, and Westin Hotels & Resorts.  For more information, please contact Sammy Grill at: sammy@magicrock.com.sg |web: www.standupasia.com | facebook & instagram: @standupasia.comedy