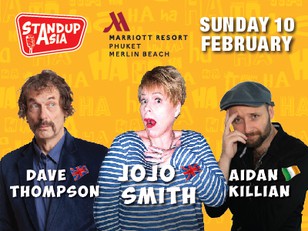 with DAVE THOMPSON and AIDAN KILLIAN 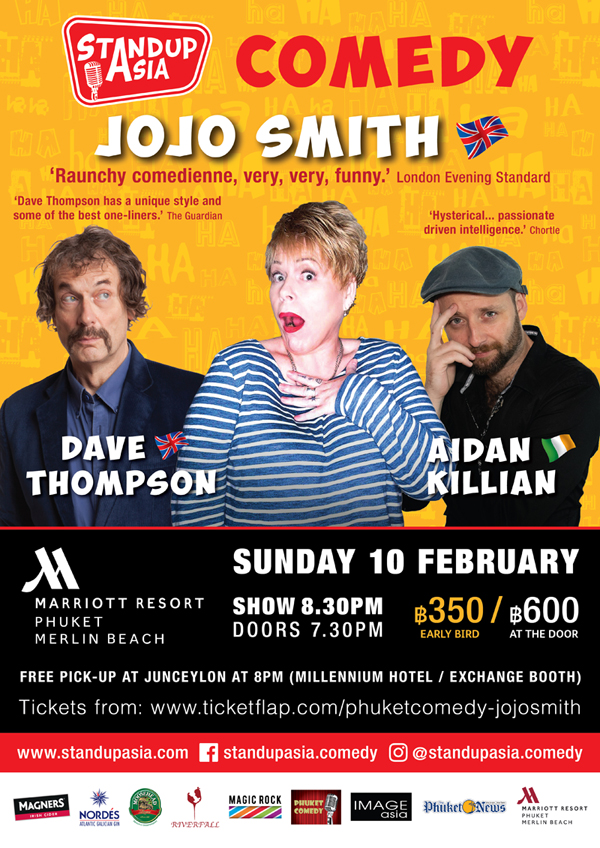 JOJO SMITH has gone from journalist to open spot to late-night TV personality, from global fame on the internet to international comedy performer.  SMITH made a name for herself as a chat show host with guests that included Jimmy Cricket, Lee Evans, Jo Brand, and Rich Hall on her self-written show, Funny Business.  A sold-out tour as support to Craig Charles quickly got her topping the bills at venues all over the UK.  She made her solo Edinburgh Fringe debut in 2016 with her critically-acclaimed autobiographical show, I Was Mick Jones’ Bank Clerk.  Since then, she has made an impact with sold out tours across Europe, South Africa, South East Asia, Australia, China, and UAE.  ‘A manic force, leading where male stand-ups fear to tread’ (Sydney Morning Herald), don’t miss this ‘in yer face with a twinkle in her eye’ comedian on stage this February.

DAVE THOMPSON, known for his hilarious one-liners, absurd persona, and ‘mad comic brilliance’ (Ben Elton), has performed stand-up comedy in over 35 countries.  He has appeared in four feature films and numerous TV shows, including Harry Hill’s TV Burp, which commissioned him as a writer.  He has written material for many other famous names, including Harry Hill, Ronnie Corbett, Bruce Forsyth, Stewart Lee, Jim Tavaré, and Phil Nichol.  THOMPSON has appeared in London’s live show, Al Murray: The Pub Landlord, and at the Edinburgh Fringe, but he is best known as the person inside the Tinky Winky costume in the world-famous TV show, Teletubbies.  Don’t miss the zany, unique eccentricities of ‘the weirdest dude on the face of the Earth’ (Time Out), who will be sure to astonish you with his best one-liners.

AIDAN KILLIAN, one of the most daring, original, and thought-provoking comedians that Ireland has ever produced, has now performed his unique comedy style for seven Edinburgh Fringes, becoming known for his ‘master class in satire’ (Bunbury Magazine).  Seen as a highlight at Glastonbury Festival 2016, KILLIAN went on to be nominated for Best Comedian at the World Fringe in 2017.  He carried on bringing laughter to audiences across the globe during his two-year world comedy tour, being described as ‘deliciously subversive’ (The Advertiser).  You don’t want to miss who critics call, ‘Hysterical… passionate, driven intelligence’ (Chortle).

Do not miss JOJO SMITH (UK) with special guests DAVE THOMPSON (UK) and AIDAN KILLIAN (IRL).  Early bird tickets are on sale now from 350 THB or 600 THB at the door.  Get your tickets today on TicketFlap: www.ticketflap.com/phuketcomedy-jojosmith

STANDUP ASIA is a part of Magic Rock, a Singapore-based events company that organizes comedy festivals and other events throughout Asia.  It has brought international headliner comedians, such as Doug Stanhope and Bill Bailey, to vibrant, multicultural audiences across the region.  For more information, please contact Sammy Grill: sammy@magicrock.com.sg |web: www.standupasia.com | facebook & instagram: @standupasia.comedy