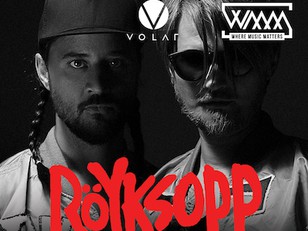 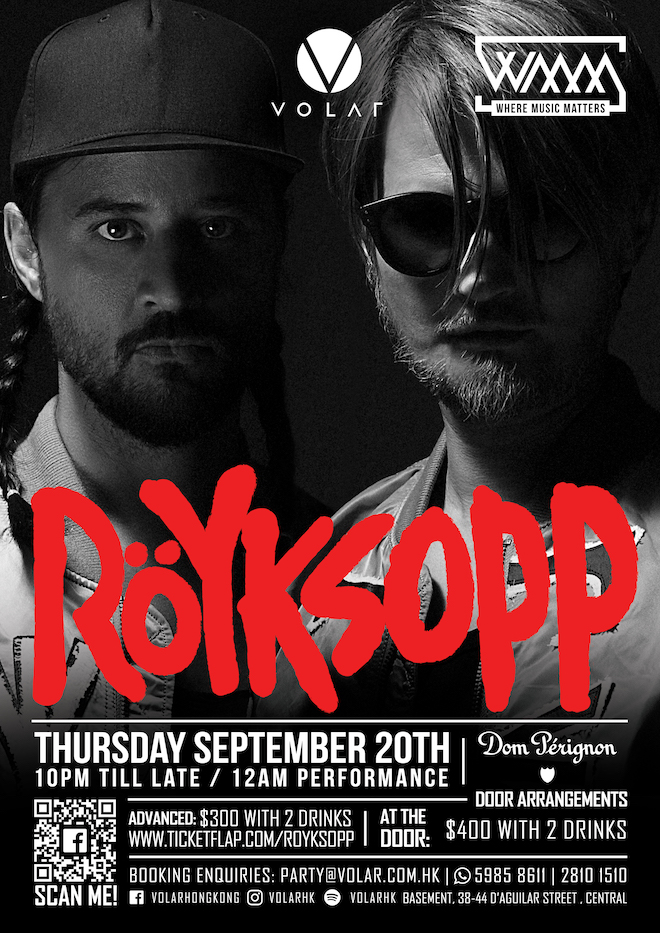 Biography:
Since they first burst onto the scene with the release of their classic debut album Melody A.M back in 2001, Norwegian electronic music overlords Röyksopp have only released three further studio albums. First came 2005’s more experimental The Understanding, then 2009’s extrovert, pop-lead Junior followed swiftly by its more introvert sister album, Senior. That was back in 2010. Four years later, however, and following a burst of creativity instigated by personal upheaval and the general living of lives they’re about to release their second album in the space of six months – following Do It Again, their collaborative mini-album with fellow Scandinavian legend, Robyn – in the shape of the multi-faceted, The Inevitable End.

“We feel there’s a lot of music out there that just doesn’t have any identity – something that we really strive for in our music,” says Torbjørn of the time it takes between releases. “We don’t feel like we’re in any hurry; we intend to make music we cannot find elsewhere – which is both ambitious and time consuming” agrees Svein. “And we also want our music to have longevity, therefore we always seek to produce and engineer it in a way that steers clear of generic production trends.”

As with most things Röyksopp do there is a multi-faceted reason behind the album’s title, The Inevitable End. While they’re keen to point out that it doesn’t mark the end of Röyksopp, they do see it as their final album. “We feel like this is a goodbye to the traditional album format,” explains Svein. “In our consecutive run of albums, we have been able to say what we want to say and do what we want to do with the LP. We’re not going to stop making music, but the album format as such, this is the last thing from us.” Having now created five complete bodies of work, the pair feel like the future is open to being more experimental with how they share their music, be it with EPs, one-off singles or something more visually focused. “With Melody A.M we felt like we established our own voice and take on electronic music. Then, with The Understanding, we wanted to move slightly off-centre and experiment more – without losing what is uniquely identified as Röyksopp. With Junior we wanted to be a bit more extrovert, focusing on vocals and youthful energy. With Senior, we wanted to flip it around completely; instrumental, introvert and hidden,” continues Svein. “With The Inevitable End we’ve moved into a darker subject matter, with emphasis on the lyrical content. This candid approach feels very both personal, sincere and conclusive.” “With this album it became clear we wanted to make an album in a classical sense even if it’s the last one we make,” adds Torbjørn. With a story running from the opening, fuzzy electronics of Skulls – with its teasing “if you want to ride” mantra – to the closing, fan-dedicated Thank You, this is an album to be enjoyed from start to finish; a complete story that takes you from A to Z.

The title also relates to the album’s core themes of loss (be it emotional or physical), the passing of different eras in people’s lives and the effects of conflicting emotions, themes that are showcased exquisitely in Monument (T.I.E. Version), the epic collaboration with Robyn that acts as bridge between Do It Again and The Inevitable End’. Re-worked for this album, its power is even more magnetic. “I think it’s fair to say that the two records are dwelling on the same themes. This album has a strong lyrical content and I think that’s more evident than on any of our other albums – I guess writing songs and working closely with Robyn has had an effect,” says Svein. “Without being too gloomy or dark, there’s been turmoil in our lives. And prior to making Do It Again, Robyn was in a similar space, which is one of the reasons why we’re so compatible.” With the two records being worked on simultaneously, The Inevitable End may share a similar headspace to Do It Again, but this is very much a quintessentially Röyksopp album, even if that definition is itself brilliantly malleable. “We’re always looking to push certain boundaries, but there’s something there that’s been there all the time and that binds it altogether,” explains Torbjørn. “We’re not keen on repeating ourselves.”

So while the opening track Skulls feels like a classic Röyksopp song – all squelchy bass lines, filtered synths and vocodered, yet soulful vocals – the album also takes in sophisticated, delicate heartbreak on the Man Without Country collaboration Sordid Affair; odd, shape-shifting ambience on the Robyn-featuring Rong; bouncing electro pop on the deceptively upbeat Save Me (featuring regular contributor Susanne Sundfør on vocal duties) and the deliriously sad, cry-on-the-dancefloor classic, I Had This Thing, one of four collaborations with Jamie Irrepressible. In fact, as with all their albums, the importance of picking the right vocalist for each song was paramount. “We always want to find the right voice matching the specific sentiment of a track,” states Svein. “And the people we’ve been fortunate enough to work with, are people who not only possess brilliant vocal abilities individually – they also in their own unique way, bring their own universe with them,” he continues. “We are inviting them to collide their universe into ours. It’s not about having a voice for hire. We want the people we work with to feel like they can involve themselves to the fullest – it’s about finding the perfect voice for our state of mind,” adds Torbjørn.

At the core of the album is this universal sense of conflicting emotions and choice; in pursuit of fulfillment, how far can you go? Should one heed one’s conscience or succumb to one’s desires – albeit the moral ramifications? And then there’s doubt and denial. And the battle between reason and desire, that’s summed up perfectly on I Had This Thing as Jamie softly flits between the lines “I still don’t know just what I’ve done” and the emotional final mantra of “I never meant to let you go” while a cavalcade of electronic textures descends around him. But while the lyrics deal with darker themes, this isn’t a musically introspective album. This is a cohesive, fully realised electronic symphony from a pair of production geniuses constantly looking to innovate. “Senior, for example, is very introspective; both secret and raw production-wise. The Inevitable End, on the other hand, has a very clean and crisp production in comparison,” explains Svein. “We wanted this pristine surface to act as a contrast to the grittier subject matter that lies beneath. At first listen, one might get the impression that T.I.E is a place of solace and bliss. But if you pay attention to the lyrics, you’ll tap into the somber undercurrent running through it all – as if the music is bleeding. This is not a dance album at all. This is home listening as far as we’re concerned. It’s headphones music.” All you need do is pop them on, sit back and let Röyksopp take you into their own special world again.