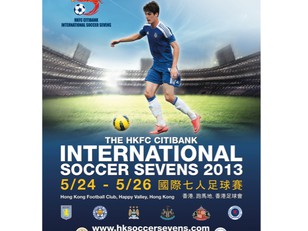 Under 16s are eligible for free entry and do not require a ticket.

<Special Offer> Pay with your Citibank Credit Card and receive a 40% discount!

Each year the tournament continues to grow and in 2013 between 7,000 - 9,000 spectators are expected to visit HKFC over tournament weekend to watch the action.

Once again in 2013, the tournament will consist of Main and Masters competitions, as well as a Junior Soccer Sevens for local youngsters.

The HKFC International Soccer Sevens first started in 1999 at Hong Kong Football Club using a seven-a-side format - a style of play that encourages the most exciting elements of the game and free-flowing attacking football.

Now in its 15th year, the Soccer Sevens has established itself as THE best seven-a-side tournament of its kind in the world. With its two-tiered format spectators can delight in the skills of some of the legends of the game as well as young stars of the future.

The Soccer Sevens has proven to be a successful platform for nurturing young players. The tournament prides itself on being a showcase for many of the stars of the future. Such talent includes the likes of Gabriel Agbonlahor (Aston Villa & England), Anton Ferdinand (West Ham, Sunderland & QPR), Shaun Maloney (Celtic, Aston Villa, Wigan & Scotland) and Glen Johnson (Chelsea, Liverpool & England) to name just a few.