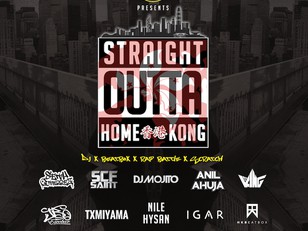 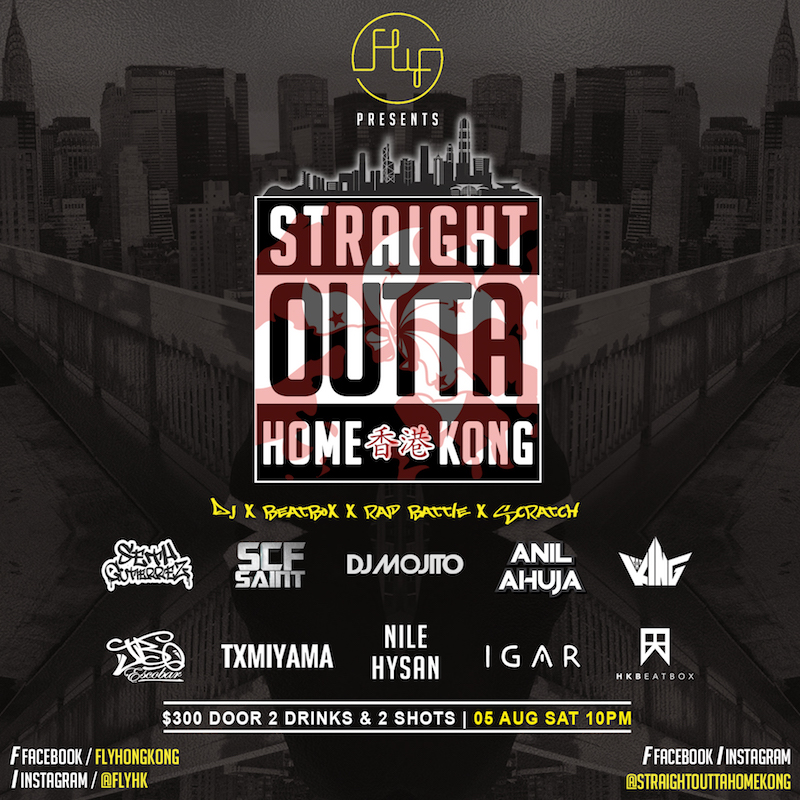 Believing heavily in the Hip Hop lifestyle and culture, with major focus on the musical aspect, Straight Outta Home Kong is a Hong Kong based international brand which was created to eliminate the barriers and carry forward the talent of the many elites who seek to create history, serving you the dopest of international level entertainment, including events, parties, festivals, and more all around the prime cities of Asia. Straight Outta Home Kong also embodies and concentrates on bringing its finest talent including deejays, emcees, beatboxers, breakers, dancers and more in to the spotlight, creating a movement.

Nile Hysan
The Young & Dangerous, first youngest rapper in the scene who conquers 'Off The Dome' freestyles. Anywhere, anytime - not one to mess with, always hungry and never satisfied.
www.soundcloud.com/denihilation

IGAR
Coming all the way from Guangzhou China, repping the music scene and heading to Hong Kong to shake the city with a crazy lyrical performance + a Rap Battle with the Young & Dangerous, Nile Hysan.
www.soundcloud.com/igartheinfinite

LIVE RAP PERFORMERS:
TXMIYAMA x Yuri Tomiyama
Reppin' Hong Kong & Japan, Original Jap Boy throwin' some crazy bars and be sure to not miss out with his set that evening.
www.soundcloud.com/txmiyama

J.Bo Escobar
Handle your present with confidence. And prepare for the future without fear. Intelligence plus character that is the true education.
www.soundcloud.com/jboescobar
www.youtube.com/JBOHK69

LIVE OPEN-FORMAT BEATBOX SOLO SET:
FATKING
This is FATKING, a Hong Kong based Beatbox Artist (Sunny Idea HK Limited represent), in other words "I spit groove, that makes you move". FATKING tends to interact a lot with the audience during his showcase. Sometimes making the crowd clap, sometimes singing, sometimes screaming, and even sometimes teach beginner beatbox skills and create a global jam! The most interactive performance guaranteed.
www.youtube.com/user/LuVocalzFatKinG

DJ Mojito
Specializing in Hip-Hop & Electronic music, Mojito continues to grow and incorporate different genres to create music that stands out. Having performed for DJ Mag Top 100 artists like DANNIC, R3HAB, Project 46 at top-notch venues and events recognized internationally, he went on to perform at Hong Kong’s biggest event known as Beat Ship, on board the Superstar Virgo Cruise alongside artists like James Zabiela, Jekey. Prominently leading to international shows including a closing set at Fashion TV Club, Evening Show in Shenzhen for the infamous superstar duo Wolf Pack, he then headlined as a duo with SCF-SAiNT at SKY21 in Macau and most recently Club Raven in Xiamen, China.
www.djmojito.net

SCF Saint
The genius with thousands of ideas that recreate the stated rules and breaking the norm. Developed interest in film production due to the vision of making music videos. Attracting countless interested talents, this brought the 7 pride slaughter band 'Dope Boy' that was established early 2011 along with a filming company 'Without Equal Productions'. As a visionary, SCF-SAiNT is also the organizer of the 'Hong Kong Underground Cypher' which feature many talents from different backgrounds. The first in his city to connect the dots and destroy barriers in the Hip-Hop community. Now working side-by-side with DJ Mojito, they're achievements work back to back and are now have established themselves as the 'HK International Duo', they aim touring their brand 'Straight Outta Home Kong', including countless ideas and go global.
www.scfsaint.com

DJ'S:
DJ Seth Gutierrez
DJ Seth Gutierrez entered the Hong Kong party scene in 2011, packing clubs with his upbeat sound (and personality to match). Starting out with hip-hop and commercial tunes, DJ Seth began his journey in the shadows of Lan Kwai Fong at Club Envie, within months he secured three simultaneous residencies (Likuid, Hyde/Nova & Azure) establishing his whirlwind sound within the streets of the famed party district.
www.soundcloud.com/djsethgutierrez

Dj Anil Ahuja
Enticing the crowd with an infectious energy that moves feet and make bodies writhe, DJ Anil Ahuja is a party pied piper. He leads his children of the night with a unique infusion of Progressive, Iberican, and Tribal style he calls “tribalgression”. Flowing with creativity, DJ Anil Ahuja morphs these sounds with house, moombahton, trap, hip hop, urban, drum and bass, and dubstep, effectively inviting everyone onto the dance floor.
www.soundcloud.com/anil-ahuja