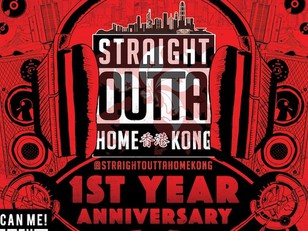 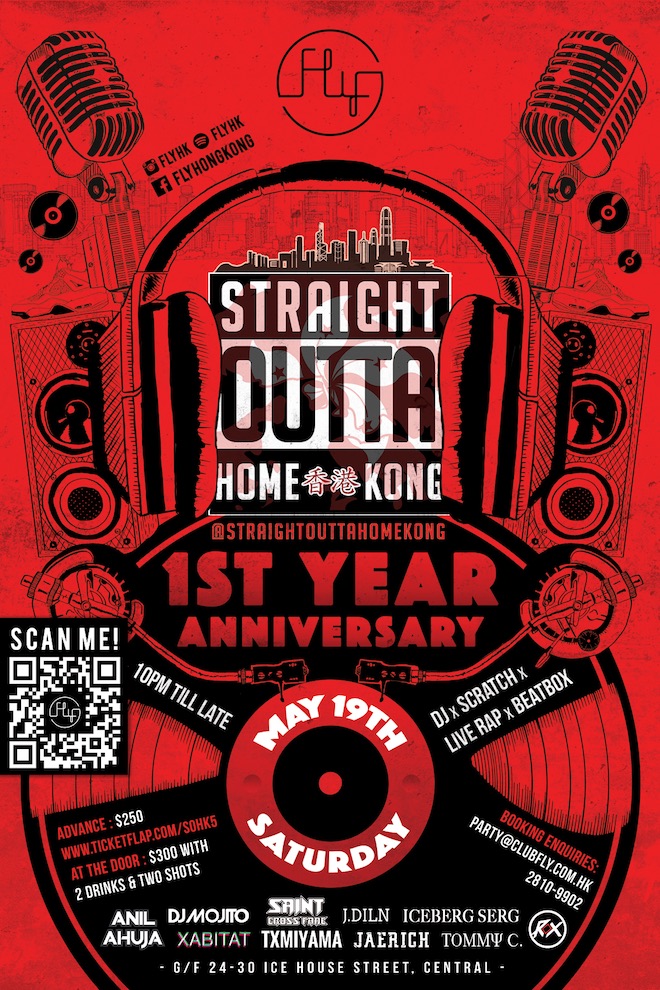 On this day exactly one year ago, history was created through a fresh Hip Hop party concept at your favourite Urban music club, Fly Hong Kong. Bringing you the best entertainment in the city, from scratch djs, rap battles, pop & lock + breakdancing, raw rap performances all the way to beatboxers all under one roof! This one is for Hip Hop and all the progress we've made in putting Hong Kong on the international map/radar. Come through and celebrate with us in style and enjoy another night of raw live entertainment we have prepared for you!

LIVE PERFORMERS:
• Xabitat
An uprising crew about to shake the 19th, with their new fresh line-up, dope bars & beats and vocals more raw than ever.

• Txmiyama
Reppin' Hong Kong & Japan, Original Jap Boy throwin' some crazy bars and be sure to not miss out his latest hits as seen online.
https://soundcloud.com/txmiyama

• Jae Rich x Jason Sinarwi
Jae Rich (Jason Richard Sinarwi) was born and raised in Hong Kong and began writing and performing at the age of fifteen. After a long hiatus spent establishing his career in fitness, Jason decided to pick up the microphone once again to pursue his passion in hip-hop and poetry. His musical influences range from old-school boom bap artists like Tribe Called Quest, to lyrical new-school artists like Slaughterhouse and J. Cole. Jason's goal is to motivate, up-lift and encourage people through music, just as music has done for him.
https://soundcloud.com/jaerichofficial

• Iceberg Serg
Coming from Hong Kong, Iceberg Serg firstly was working with XABITAT crew, further pursuing his solo path ahead and packing new content in 2018 for us to look forward to. Catch him perform some new fresh line-ups that he's recently freshly prepared
https://soundcloud.com/icebergserg

• Tommy C x Tommy Chim
Tommy C is a local Beatboxer who'll be bringing in his own set specially tailored for this coming anniversary. He'll be alongside RX, who's also preparing something amazing that will be bringing a double dosage to you all

• J.Dhillon x J.DILN
Rnb/Dancehall/Hip Hop composer-rapper and singer - J.Dhillon is an artist from Hong Kong who has been making music for 3 years. He records and composes his tracks by himself. He craved out a distinct sound which is up beat, catchy and melodic. He has consistently been performing at different clubs across Hong Kong. His versatility in different genres allows him to capture different audiences attention.
https://soundcloud.com/j-dhilon

• RX黃浩邦
RX Wong Ho Pong is a renowned Beatbox Artist. He is Known as "Leader of Hong Kong Beatboxing" and being called "The Thousand Voices Man" in Japan. RX was Ranked 2nd in China Beatbox Contest 2012. He also joined a contest organised by TBS Television Broadcast in Japan with Jonathan Wong. They ranked 1st and broke the record in Japan. He has worked with other famous singers like HOCC, Khalil Fong, Ivana Wong, To Kit, Chiu Tsang Hei.

• DJ Mojito
Specializing in Hip-Hop & Electronic music, Mojito continues to grow and incorporate different genres to create music that stands out. Having performed for DJ Mag Top 100 artists like DANNIC, R3HAB, Project 46 at top-notch venues and events recognized internationally, he went on to perform at Hong Kong’s biggest event known as Beat Ship, on board the Superstar Virgo Cruise alongside artists like James Zabiela, Jekey. Prominently leading to international shows including a closing set at Fashion TV Club, Evening Show in Shenzhen for the infamous superstar duo Wolf Pack, he then headlined as a duo with SCF-SAiNT at SKY21 in Macau and Club Raven in Xiamen, China. Most recently, his debut shows in Mumbai, India.
www.djmojito.net

• Saint CrossFade
The genius with thousands of ideas that recreate the stated rules and breaking the norm. Developed interest in film production due to the vision of making music videos. Attracting countless interested talents, this brought the 7 pride slaughter band 'Dope Boy' that was established early 2011 along with a filming company 'Without Equal Productions'. As a visionary, SCF-SAiNT is also the organizer of the 'Hong Kong Underground Cypher' which feature many talents from different backgrounds. The first in his city to connect the dots and destroy barriers in the Hip-Hop community. Now working side-by-side with DJ Mojito, they're achievements work back to back and now have established themselves as the 'HK International Duo', they aim to tour their brand 'Straight Outta Home Kong', including countless ideas and go global.
www.SCFSAiNT.com

• Dj Anil Ahuja
Enticing the crowd with an infectious energy that moves feet and make bodies writhe, DJ Anil Ahuja is a party pied piper. He leads his children of the night with a unique infusion of Progressive, Iberican, and Tribal style he calls “tribalgression”. Flowing with creativity, DJ Anil Ahuja morphs these sounds with house, moombahton, trap, hip hop, urban, drum and bass, and dubstep, effectively inviting everyone onto the dance floor.