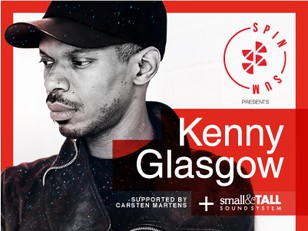 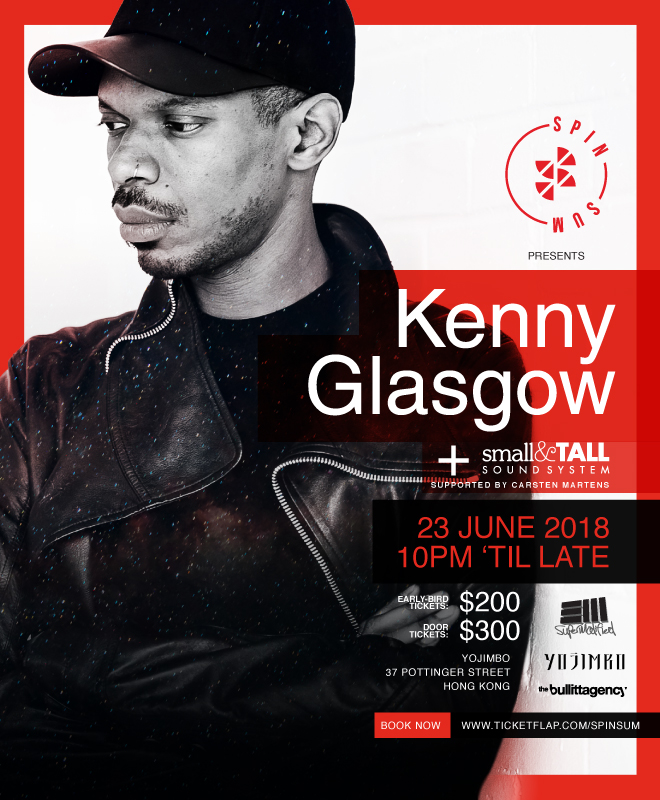 Get ready to dance and party as Spin Sum entertainment and Yojimbo present to you an exciting line up of DJ’s….starting with North American electronic music pioneer Kenny Glasgow. Supported by local musical talent, Hong Kong based Small&TALL Soundsystem and Carsten Martens

Cloak room service is available on the night. Please ask the amazing hostess at the door

We promise you this will be a night to remember so grab your friends and get on this musical journey together.

We at Spin Sum believe in the spirit of helping others in our community, which is why we have teamed up with the Hong Kong Cancer Fund.  We strongly encourage you to support this incredible charity organisation helping the lives of people in Hong Kong to ensure that one faces cancer alone.

About HKCF
Hong Kong Cancer Fund is Hong Kong's largest cancer support organisation, providing free information and professional support to anyone living with or affected by cancer. Our goal is to make life better for people touched by cancer.

Background
Established in 1987, the Hong Kong Cancer Fund’s vision was to better the quality of cancer support in Hong Kong and ensure that no one faces cancer alone. They began by offering free information and support to anyone touched by cancer, which has slowly expanded over time to address all aspects of living with cancer.

Kenny Glasgow is a North American electronic music pioneer; a role he’s held for over two decades. The Canadian has returned to his solo roots after spending 5 years as half of the acclaimed duo Art Department, functioning as a musical engineer, composer of both music and lyrics, and vocalist. Before he started touring the world, releasing inﬂuential full lengths, headlining major festivals and gracing the cover of taste making magazines with Jonny White, Kenny Glasgow already had a cult and loyal following dating back to the early nineties.

Kenny Glasgow ﬁrst became immersed in the scene as a promoter, putting on illicit warehouse parties in his native Toronto before progressing to become resident at acid house mecca The Buzz and later the world famous Industry Nightclub. It was there that he picked up a sense of what worked dance ﬂoors, both in terms of DJing and production. Whether solo or with Art Department, his experiences influenced his own emotive, tortured sound with unique gravelly vocals which have very much become his trademark.

The shining jewel in his solo crown to date is ‘A Taste of the Low Life’, a stunning debut solo LP infused with dark and gritty electronic styles released on No.19 Music. He has also released a number of perfectly formed EPs on labels like Jinx, Roger Sanchez’s Narcotic and Family Recordings. He also collaborated with musical partner Mario J on projects Method Men and Unabomber, racking up remixes Strictly Rhythm and Azuli. Fans were certainly not disappointed when his deep, melodic ten track album ‘Circus Tales’ hit the markets summer of 2016, reminding everyone that he’s back and hitting it harder than ever with plenty lined up for 2018

The three friends weave together tracks, loops and effects to create a unique, hypnotic, multilayered, deep and groove-based house-meets-techno sound that starts slow and builds as the night goes on, getting slowly more  intense.

Together they founded Hong Kong based entertainment agency, Do What You Love. Jason is also co-founder, resident DJ and music director of Robot Heart, arguably the world’s leading dance music collective, Wonderfruit and Further Future festival

Carsten Martens was born in Germany and his interest in music started at early age of being 15 years old. Later on, he started playing in clubs all over Germany and overseas. Famous Clubs like Rheingold Saal (Duesseldorf), Neuschwanstein (Cologne), Funky Chicken (Cologne) Nachtflug (No. 1 underground club in Cologne at the time), Tresor (Berlin), Warehouse (Cologne), Kiesgrube (Cologne) …… to name just a few.
He played along side with artist like Felix Da Housecat, Carl Cox, DJ Wilfried, Bjoern Mandry, Dave Pezzner, The Revenge and many more….
He also played on large events like Greenkomm, Loveparade (Berlin) and the ever-famous island in Ibiza (Pasha). After Djing over a decade he turned back into live music recording and worked with several artist and record labels.
In 2017, he started his own record label “DMR” or DoubleMaltRecords, an independent electronic underground record label which is about to start off in November 2017.
His debut release “Sleepless” in November 2017 got a massive feedback from the underground scene and got over 60,000 plays/streams/downloads across all channels. He is now following up with a 12 track release schedule over the next 12 months, starting with the 2nd release in May 2018 and every following month after.