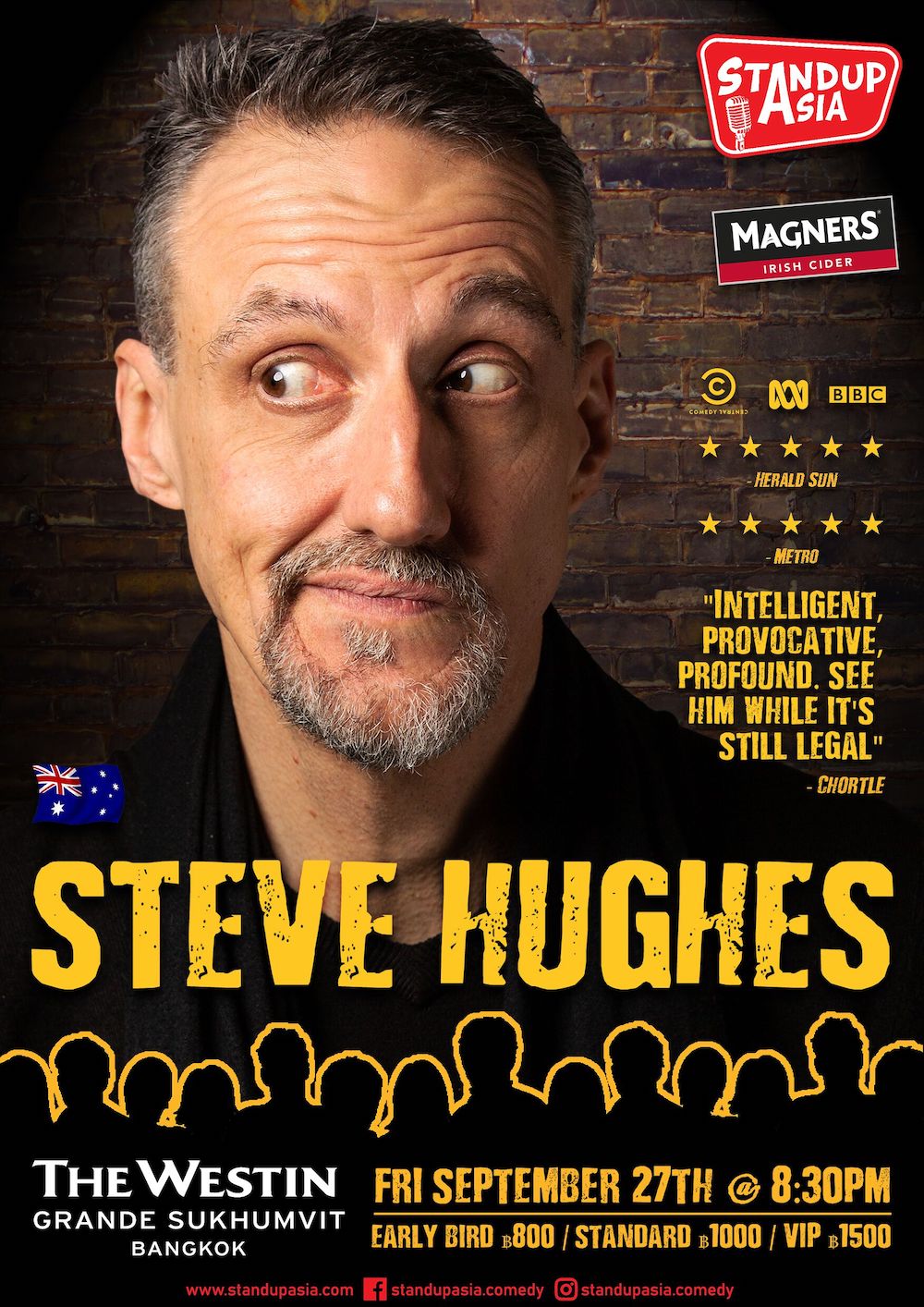 Comedy legend Steve Hughes comes to Bangkok for one night only - Friday the 27th of September.

Sit tight as the self-styled ‘heavy metal comedian’ comes to the prestigious Westin Grande Sukhumvit with hard-hitting satire, confronting social commentary and astute observations. You can witness one of the all-time great comics for only 700baht. Early bird tickets are limited!!

Internationally renowned stand up comedian Steve Hughes is not one to shy away from the issues. A “convict wizard”, Hughes brings his worldly insights to the bleeding obvious and always tells it like it is. Known as an erudite, philosophical, and highly opinionated comic, he seamlessly, or paradoxically, weaves together a laid-back Aussie charm and acutely caustic anti-establishment rage. Distinctive and thought-provoking, Hughes is renowned for his honesty, openness, and invaluable insight.

Beginning his foray into comedy in the 1990s, he took Australia by storm before moving to Manchester, where he now lives. Influenced by comedy greats Bill (Now Creepy) Cosby, Richard Pryor, and Woody Allen to name a few, Hughes has toured the world from Edinburgh to America, and now Asia! Selling out and receiving critical acclaim all over, Hughes is rarely seen without a leather jacket, band t-shirt, and jeans – what he attributes to his younger days as a heavy metal drummer.

On television, Hughes has performed stellar sets on Live at the Apollo, Michael McIntyre’s Comedy Roadshow (BBC One), Stand Up For The Week (Channel 4), and One Night Stand (Dave) to name a few. His 2012 debut solo show, Big Issues was a smash hit success and saw Hughes adding an extra week of dates, due to overwhelming demand. A year later, Hughes returned with While It’s Still Legal and played over 50 dates across the country, receiving rave reviews.

Described as 'Ireland's most daring comedian', Aidan Killian brings a uniquely passionate style of comedy which often leaves the audience thinking and feeling better about themselves and the world. Having been described by Bunbury Magazine as 'A masterclass in satire', Killian has performed one-man shows at seve Edinburgh Fringe Festivals and was a 'Highlight' at the 2017 Glastonbury Festival and 'Best Comedian' at The World Fringe, Australia in the same year. Sharing laughter on stages across the world, he is one of the world's most travelled comedians, bringing his effortless delivery to over 30 countries and counting!

ABOUT STANDUP ASIA
A Singapore-based comedy promoter that has supported the international tours of Jimmy Carr, Doug Stanhope, and Bill Bailey to name a few. From festivals to hour-long specials, Standup Asia has brought the best of international comedy right to your doorstep, attracting sponsors ranging from the Hong Kong and Singapore Tourism Boards, as well as Marina Bay Sands and the Westin Hotels group.