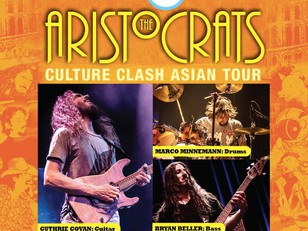 THE ARISTOCRATS is a heavy progressive rock collaboration between well-known musicians guitarist Guthie GOVAN, bassist Bryan BELLER, and drummer Marco MINNEMANN formed in 2010. The band had an unusual start, being the accidental bi-product of one of those virtuoso-happy NAMM collaboration shows, except GOVAN was a last minute replacement for fellow fusion legend Greg HOWE. BELLER and MINNEMANN were impressed by the material they had heard of GOVAN's, so they asked him if he wanted to play the NAMM show after HOWE had to drop out due to a last minute obligation. GOVAN obliged, and the roots of THE ARISTOCRATS were sown.
The three guys, comprised of an underground guitar hero, a well-known and respected clinician drummer, and a popular live and session bassist, were separated by a few thousand miles between London (GOVAN), Nashville (BELLER), and San Diego (MINNEMANN), yet the three still managed to pull off a 6-song set at NAMM, which got the three talking about the chemistry which they shared on and off stage.
It didn't take long for a band to form, and immediately after the first gig the three began to talk of more shows and eventually an album. As creativity began to flow and songs began to be written, it became clear the very interesting combination of styles in which the three musicians came from, ranging from jazz to death metal, would eventually come down to an interesting style of jazz-fusion oriented hard rock, taking plenty of influence from 70s giants such as RETURN TO FOREVER, MAHAVISHNU ORCHESTRA, KING CRIMSON, and UK to virtuoso musicians such as Steve VAI and Joe SATRIANI, to the experimental complexities of Frank ZAPPA and so much more. Eventually, however, the band finally took it all and put it into a single output - their debut self-titled album which was released mid-late 2011. The next 18 months saw the band successfully tour both coasts of the US, followed by a conquest of Europe plus Korea and Japan. In 2013, the band released their long awaited sophomore album, Culture Clash, whose title is an allusion to the multi-national makeup of the band (Govan is British; Beller is American; Minnemann is German). They used a formula of three songs from each band member – but weaponized it with the collective experience of eighteen months of touring as a unit.
The resulting material became more aggressive, adventurous, and intense, embodying a refusal to rest on the laurels of the debut album’s surprise success.
Whether it’s about the music, the touring plans, the record artwork and sequence, the business decisions, or what have you, everyone has an equal say. Perhaps Guthrie said it best when he used the phrase “a rowdy democracy of musicianship.”
It’s not just fusion. It’s not just shredding. It’s not even meant to be taken seriously at times. It’s just the sound of three guys who did a single pickup gig and suddenly discovered they had something musically deep going on together...along with a propensity for employing R-rated song titles! Check The Aristocrats out.
Contact Host
View hosts events