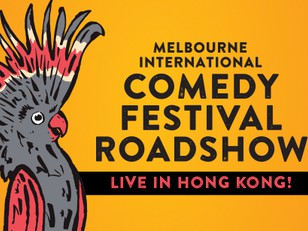 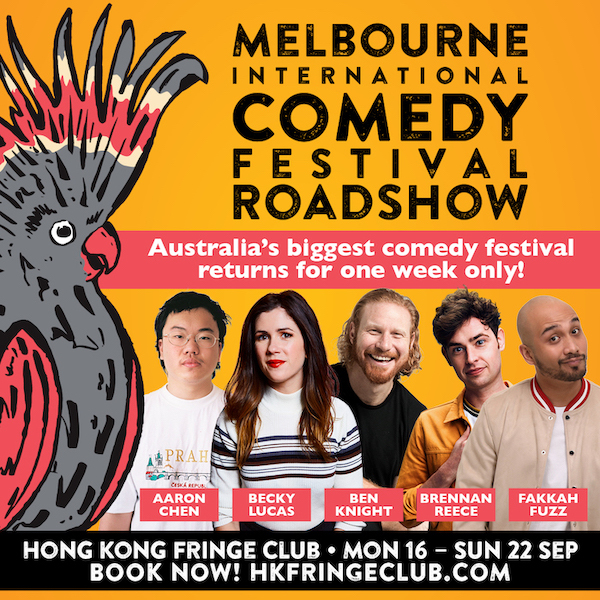 Gear up for giggles! The Melbourne International Comedy Festival Roadshow is back with a new crew of fantastically funny comedians, specially selected to bring the irresistible energy of Australia’s largest comedy festival to Hong Kong! With a diverse and dynamic line-up of performers hand-picked by the Festival, you know you’re in for a night of exceptional entertainment.

This year’s line-up features a rising star on the Singapore scene, Fakkah Fuzz; one of most exciting voices on the Australian comedy scene, Becky Lucas; the award-winning and hilariously unpredictable Aaron Chen; teacher turned comic, musician and actor Ben Knight, and one of Melbourne’s favourite British guests and an “English Comedian of the Year” winner,Brennan Reece.

Sydney boy Aaron Chen brings exquisite mic technique to the freshest and most splendid comedy you’ll ever have seen. He has toured around Australia to sold-out crowds and rave reviews. Since emerging on the comedy scene six years ago, he has amassed a collection of awards, including the Melbourne International Comedy Festival’s “Class Clowns” National Winner (2012), RAW Comedy National Finalists (2013), Directors’ Choice Award (2016, 2019) and Best Newcomer (2017).
“Chen certainly makes his mark with this unpredictable hour“ Chortle (UK)

Writer, performer and YouTube fave Becky Lucas is one of the most exciting voices on the Australian comedy scene, and she’s commanding worldwide attention. In 2014 she was hand-picked for the prestigious Melbourne International Comedy Festival’s “The Comedy Zone” showcase, and has toured solo shows annually ever since. Becky’s writing credits include co-writer on Matt Okine’s The Other Guy, and Josh Thomas’s Emmy-nominated show, Please Like Me.
“In a league completely of her own.” Time Out

Ben Knight, an ex-teacher from Queensland, is now a comedian and actor  who delights his audiences with stand-up and song. He has appeared on Australian TV screens on Upper Middle Bogan (ABC), Offspring (Network Ten) and The Warriors (ABC), and in the feature films The Merger (2018) and Judy and Punch (2019).
“The effortless way he dances, glides and twirls between alliterations, allegories and cacophonies make his love of words and poetry clear.” Herald Sun

The UK’s Brennan Reece won the “English Comedian of the Year” title in 2015, was  nominated for the “Best Newcomer” award at the Edinburgh Comedy Awards in 2016, and has a growing list of writing credits. With his boyish charm and an engaging, optimistic style, he’s a natural, enthusiastic storyteller you can’t help but love.
“Powerfully entertaining, unstoppable force.” Chortle (UK)

A fast-rising star on the Singapore scene, Fakkah Fuzz is a natural and charismatic performer. Since co-headlining Singapore’s Comedy Club Asia and twice taking the title at the “Stand Up for Singapore” comedy competition, Fakkah has become the first Singaporean to have an hour-long Netflix special, with his show Almost Banned. Not one to shy away from controversy, Fakkah is outspoken and self-assured, with cross-cultural humour that’s sure to appeal across borders.

Age limit: Not suitable for people under 16 years of age