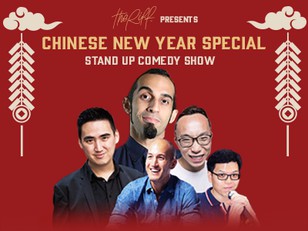 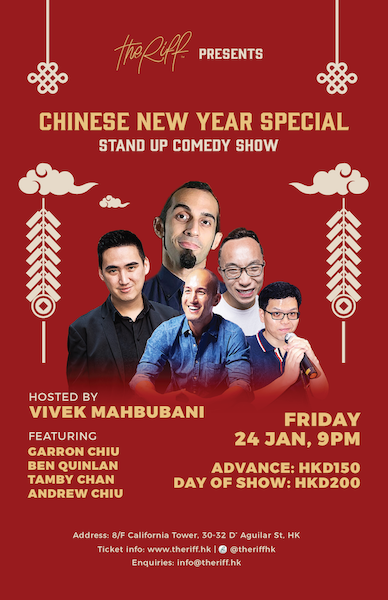 Start your Chinese Year holiday with a bang! This CNY, The Riff has a very special treat for you with Hong Kong’s top comedians!

Vivek Mahbubani: Vivek is a Hong Kong-bred bilingual stand-up comedian performing in both Cantonese and English. Having been crowned the Funniest Person (in Chinese) in Hong Kong in 2007 followed by his victory in the English category at the Hong Kong International Comedy Competition in 2008, Vivek has had the opportunity to take his sense of humour all over Asia including Hong Kong, China, Macau, Singapore, Malaysia, Manila, Bangkok, Sri Lanka and India. Having been ranked as the top comedian in Hong Kong, in 2014, the World Famous Laugh Factory in USA ranked Vivek as one of the top 10 comedians in their Annual Funniest Person in the World Competition. In 2015, he was handpicked as one of the comedians to represent Asia’s best in Melbourne International Comedy Festival.

Ben Quinlan: Hailing from an Australian father and Chinese mother, Ben Quinlan in a Hong Kong born and raised stand-up comedian.
Ben is a regular headliner at major comedy clubs around Asia, including Hong Kong, Singapore, Shanghai, Kuala Lumpur, Bangkok, Manila, and Taipei. He appeared on Comedy Central’s Stand-Up Asia! Season 2 and was the winner of the 2017 Hong Kong International Comedy Competition. Ben has also opened for a number of international comedians on their Asian tours, including Russell Howard, Kevin Bridges, and Doug Stanhope. He sold out his past ten 1-hour comedy specials in Hong Kong, with over 1,500 tickets sold.

Garron Chiu: Garron Chiu is an American born standup comedian based in Hong Kong. A mainstay in the Hong Kong comedy scene, he is the winner of the Hong Kong International Comedy Competition 2018, as well as placing 2nd in the inaugural Bangkok International Comedy Competition. He has made people laugh the world over, mostly in Asia. Garron was also featured on Comedy Central Asia.

Tamby Chan: After immigrating to Canada at the age of 7, Tamby developed his sense of humor as a social defense mechanism in lieu of speaking fluent English. He has been continuously refining his comedic voice through trial and error ever since.
Tamby was the winner of the Bangkok division of the Magners International Comedy Competition 2018, placed second at the regional finals, has been selected as a finalist at numerous international comedy festivals, and has appeared on TV like four times. His unique perspective, incisive writing, and adequate stage presence has made him a popular headline act around Asia.

Andrew Chu: Andrew is a standup comedian from Hong Kong. His unique comedy style has brought him to stages across Asia, Australia and Europe. He became the first comedian from Hong Kong to perform at the Christiania Comedy Club and a comedy tour with Comedy Kanalen (Denmark), as well as the Festival Club by MICF (Australia). His favorite milk is milkshake, ice-cream and more milk.