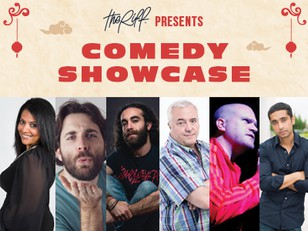 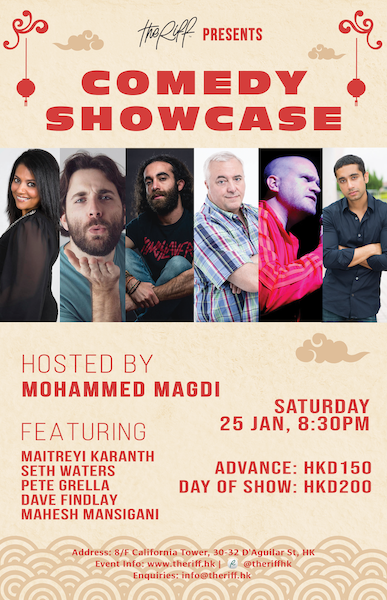 This event is Bring Your Own Beverage!
Calling all the hardcore standup comedy fans out there, The Riff, Hong Kong’s newest and only full-time standup comedy club is having its first ever standup comedy showcase, featuring a very diverse lineup of some of the finest comedians working in Asia!

Mohammed Magdi: Mohammed started his stand-up career in Shanghai, China where he was a regular feature, MC and headliner at China’s only full-time comedy club, then he went on to headline and perform in 14 countries and 24 cities so far.
Mohammed was the official opening act for Jim Gaffigan on his “Quality Time” tour in Shanghai in 2019, and the official opening act for Gad Elmaleh on his “Dream Tour” in Shanghai in 2018. Mohammed was featured on the second season of Comedy Central Arabia Stand-up show Comedy Central Presents: Stand Up
He is also the proud winner of the Bangkok International Comedy Festival 2017

Maitreyi Karanth: Maitreyi is an actor, producer took up stand-up comedy as just an extension of her real life persona, at the age of 44. Being married and having lived outside India for 22 years, first in the Middle East and now in Hong Kong, she has a collected a treasure chest of funny experiences across different geographies and cultures. After her very second open mic she was spotted by Saurabh Pant who was then touring Hong Kong and asked to open for him. Since then she has opened for Tom Cotter, Gina Yashere, Sean Patton, Tom Rhodes, Atul Khatri, Amit Tandon, Saurabh Pant(again), She has also performed in Bangkok and Singapore as featured comedian.

Mahesh Mansigani: Performing has always been one of Mahesh’s favourite hobbies, and he took part in and presented many shows in school and at university. Post university Mahesh continued taking part in amateur productions and played the lead role in the 2005 Play ‘A very Sindhi wedding’ in his home town of London.
Since beginning his standup odyssey in 2009, Mahesh now delivers a one-two knockout punch every time he takes the stage. A multi-time Hong Kong Comedy Competition, he performs all over Asia as well as produces the highly touted Ding Ding Comedy.

Pete Grella: Pete is a Hong Kong-based stand-up comedian and improviser who has been cutting up audiences around Asia for over ten years. In addition to being a regular performer in Hong Kong, Pete has performed in New York City, Shanghai, Beijing, Guangzhou, Shenzhen, Dongguan, Singapore, Bangkok, Kuala Lumpur, Fukuoka, Seoul and at the MGM Macau. He has also hosted or opened for a long list of visiting international comics, including Tom Cotter, Paul Ogata, Tom Segura, Ruben Paul, Barry Hilton and Ari Shaffir. Pete’s sets often dissect life as an expat (and just trying to fit in, in general), though he’s never afraid to poke fun at himself and his own bad habits. He also likes to engage the audience, so if you’re sitting up front, be ready to chat!

Seth Waters: Seth Waters combines frenetic stage craft with whip-smart writing to deliver a one-of-a-kind performance that's entirely unique in the Asian comedy scene. He recently won the third annual HK Laugh Festival roast battle, as well as the Stand-Up Banker topic competition at Take Out Comedy. Talking about topics ranging from life as a 6'5" gweilo living in Hong Kong and being a gay millennial to politics and food, Seth is sure to leave an impression. Catch this rising star while you can!