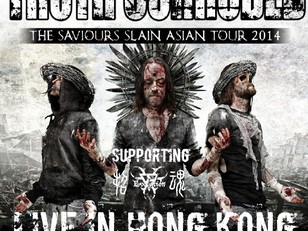 Truth Corroded are a Thrash/Death Metal act from Australia. Since 2005 the band have released three albums and with each release have steadily grown an international audience through touring across Australia, Asia and Europe, supporting bands such as Fear Factory, Lamb of God, Arch Enemy, Behemoth, In Flames, Chimaira, Sepultura, Forbidden, Death Angel, Municipal Waste, Warbringer, Suffocation, Origin, Thy Art is Murder, Psycroptic, The Amenta and many more.
In 2011 Truth Corroded released ‘Worship the Bled’. The album was mixed and mastered by Jonas Kjellgren (Scar Symmetry) and features Kevin Talley on drums (Battlecross, Daath, Misery Index, Chimaira ) ‘Worship the Bled’ was highly acclaimed through print and online media, which led to the band releasing the album in Europe and Japan through Belgian label Ultimhate Records. Following the release Truth Corroded supported Krisiun, Malevolent Creation and Vital Remains on the ‘Sounds of Extreme’ tour across Europe in 2012. Returning to Australia Truth Corroded toured alongside Fear Factory on the industrialist tour before focussing on writing the band’s new album ‘The Saviours Slain’.
‘The Saviours Slain’ was composed over several months throughout 2012 to 2013 before being recorded with Kevin Talley in San Antonio, Texas, guitars and vocals in the bands home state of South Australia, and mixed and mastered by Mark Lewis at Audiohammer studio in Florida (Devildriver, Whitechapel, The Black Dahlia Murder) joining the band as guest artists are Craig Locicero of Bay Area legends Forbidden and Bret Hoffman of legendary death metal act Malevolent Creation. The new album led to a partnership with renowned German label AFM Records, leading to a worldwide deal.
Truth Corroded offer a sound that is confronting, vicious, but backed with dynamic and a strong political, religious and social commentary that is communicated through the bands lyrics, themes and imagery. To convey the bands message, Truth Corroded have worked with German artist Bjorn Gooses at Killustrations (Dew Scented, Aborted, Norther) who was behind the controversial and confronting ‘Worship the Bled’ artwork and who has once again delivered with the artwork for ‘The Saviours Slain’.
Contact Host
View hosts events