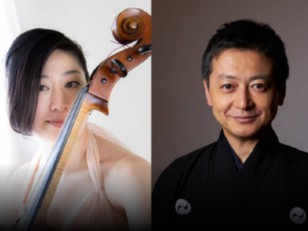 This concert was recorded live at Anyoin in November 2020 and will be broadcast in video.
This is the highlights of the concert.
"Cello×Noh"

In the very special times we live in, We strongly believe that music have the power to help us survive with energy!
We hope to bring you beautiful music at the Buddhist Concert.

【Program】
・Cello Suite No. 1  Prelude/Sarabande/Gigue
It was written by J.S.Bach when he worked at director of music. The suite is composed of dance pieces from all over Europe. ”Prelude,Sarabande, Gigue” It’s a Italian 3 beat and Irish 6 beat dance pieces. It became known better by Casals performance and became famous music in cello music.

・Casals:Song of the Birds
Casals was born in Catalonia,1876. It was made cello solo for the Nativity of Christ. He performed in the United Nations Headquarters’s concert and keeps the prayers for peace.

・Takasago
During the Engi period (901-923) under the reign of Emperor Daigo, Tomonari, a Shinto priest of Aso
Shrine in Kyushu, stops at a scenic beach, Takasago-no-ura, in Harima Province (present Hyogo Prefecture)
on his way to sightseeing in Kyoto with his retinue. While Tomonari is waiting for a villager, an immaculate
old couple appears. Tomonari asks the couple who are sweeping up the needles under a pine tree to tell him
the tale associated with the pine. The couple explains that the pine is the renowned Takasago Pine, which is
paired with the Suminoe Pine growing in distant Sumiyoshi; together they are called Aioi-no-matsu (Paired
Pines). They appreciate that Japanese poetry (waka) is flourishing in the reign of the current emperor, as it
flourished in the ancient age of the Manyōshu (the Anthology of Myriad Leaves), and compare the present
and past with the Takasago Pine and Suminoe Pine. The old man continues that poetry flourishes because
everything in this world, including trees and grasses, embraces the heart of poetry. He then explains that
pine trees, evergreens which grow for one thousand years, are especially blessed and tells the historical story
of the pine. Finally, the old couple reveals that they are the incarnation of Takasago Pine and Sumiyoshi Pine,
which are the paired trees called Aioi-no-matsu. They promise to see Tomonari at Sumiyoshi again and
board a boat from the shore washed by the evening tide. The boat follows the wind and eventually disappears
beyond the horizon.
Tomonari and his retinue depart Takasago Bay determined to follow the old couple and embark for
Sumiyoshi when the moon rises. When they arrive at the beach in Sumiyoshi, the masculine Sumiyoshi
Deity appears before the group. Under the moonlight, Sumiyoshi Deity dances airily and divinely to expel
demons, celebrate the longevity of the emperor and people and the peace of this world.
Text data: provided by the-noh.com（https://www.the-noh.com/)

・Funa-benkei
Although Minamoto no Yoshitsune contributed greatly to the annihilation of the Heike clan, he was mistrusted by his brother, Minamoto no Yoritomo, and pursued. During his escape to the provinces west of Kyoto with his loyal followers, including Benkei, he arrives at the Daimotsu-no-ura Coast. His mistress, Shizuka, also accompanies them; however, it is difficult for a woman to follow along on such an arduous journey. Persuaded by Benkei, Yoshitsune decides have Shizuka return to Kyoto. At their farewell party, she is requested to perform her particularly skilful dance and then sees Yoshitsune off with tears.
Benkei encourages Yoshitsune, who is reluctant to depart due to his sorrow in separating from Shizuka. He forcefully gives the command to set sail. As soon as their boat sails away to the ocean, a storm suddenly hits the boat. The ghosts of the member of the Heike clan Yoshitsune killed at Dan-no-ura (the coastal area in present Shimonoseki City in Yamaguchi Prefecture), appear on the waves. Especially the vengeful ghost of Taira no Tomomori, who was the top general of the Heike clan, fiercely attacks Yoshitsune with his long-handled sword, making every effort to send Yoshitsune to the depths of the sea. Benkei rubs his Buddhist prayer beads and devotedly prays to the five great fierce deities. As the deities accept his prayer, at dawn the ghosts of the Heike clan are subdued and disappear below the horizon.
Text data: provided by the-noh.com（https://www.the-noh.com/)


・Toshiro Mayuzumi： BUNRAKU
Bunraku is one of the typical cello music of Toshiro MAYUZUMI. He composed like a Japanese Ningyo joruri.(BUNRAKU)

■All videos (including sounds) are protected by law, including copyright laws, and the rights belong to the event organizer. Regardless of whether it is for commercial use or for private use, it is forbidden to photograph and record any stream. If it is reprinted without permission, you could face legal action.
■After the live stream has finished, ticket purchasers can watch the archived video within a few hours time.
■You may watch the archived video as many times as you want during the archive period.

Before purchasing a ticket, please check the above-recommended environment to watch live streaming videos.
Also, make sure there are no issues or damage to the (smartphone, tablet, or computer) and software that you are using.
We cannot support other environments other than those recommended above.


[About the network communication environment]
Live streaming video requires a high-speed, stable network environment.
If you will not use Wifi, Please make sure in advance that you have enough data to stream and that you will be within a service area for your provider.
If you use shared WiFi, please turn off any devices that you are not using before the stream starts.
If you are using your data provider (not Wifi), please avoid places with crowds, underground areas, and locations surrounded by concrete.

In order to use this service smoothly, please purchase a ticket after confirming the above.
The event organizers do not take any responsibility for live streaming failures caused by purchasers.