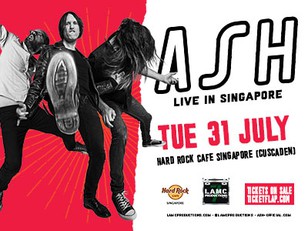 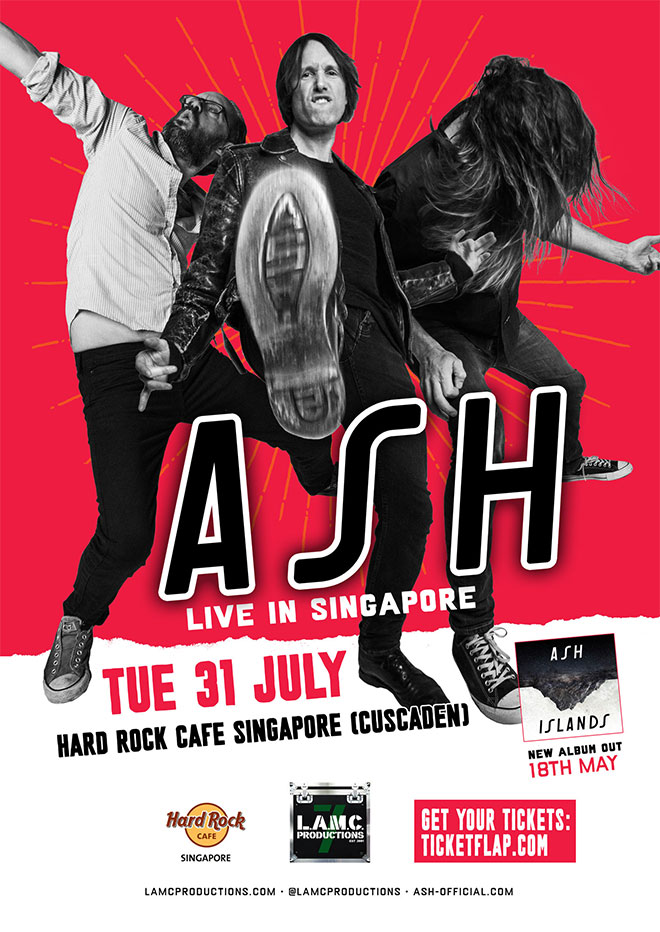 LAMC Productions is excited to announce that Irish Alternative trio, ASH, will perform in Singapore on Tuesday, 31 July, 2018 at Hard Rock Cafe Singapore!

The group’s debut single, Jack Names The Planets was funded and released by London-based radio plugger Stephen Taverner on his own La La Land label in 1994, picking up airplay and plaudits from influential Radio 1 DJs John Peel, Steve Lamacq and Mark Radcliffe. That same year, Korda Marshall, the former Head of A&R for RCA Records, snapped up the teenage rockers as one of the first signings to his newly created Infectious Records label. The group’s first two Infectious singles, Petrol and Uncle Pat, topped the UK indie charts: the third, the irresistible Kung Fu, equally indebted to martial arts legend Jackie Chan and punk pioneers Ramones, marked the trio out one of the nation’s most exciting new bands. 1995 saw Ash crack the UK Top 20 for the first time, with pop-punk classics Girl From Mars and Angel Interceptor, before the Top 10 success of Goldfinger prefigured their debut album, 1977, crashing into the UK album chart at number one.

ASH’s latest album, ‘Islands’ was released in May 2018 and received rave reviews.

Islands is an open-hearted set of songs dealing with love and loss, friendship and betrayal, identity, salvation, redemption and rebirth… all the important stuff. Pound-for-pound, it’s also the strongest, most exhilarating long player of Ash’s storied 26-year career, an album which reaffirms the trio’s status as one of the most idiosyncratic and singularly thrilling guitar bands on these islands.

“We’ve had two number one albums and 18 Top 40 singles,” reflects Wheeler, “so when we were making this record, part of the thinking was, is this song strong enough to knock one of the big hits out of our live set? With Islands, I think we’ve given ourselves a nice problem, because these are some of the best songs we’ve ever written. We’re excited to be back…”