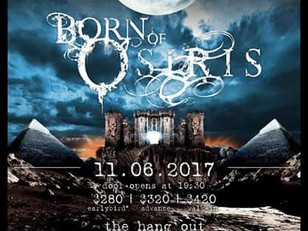 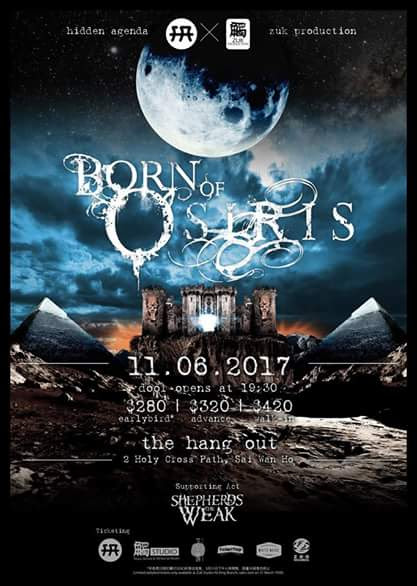 Born of Osiris is an American deathcore band, formed in 2003 in Palatine, a suburb of Chicago. The group underwent several name changes, including Diminished (2003–2004), Your Heart Engraved (2004–2006), and Rosecrance (2006–2007), before finally settling on Born of Osiris in 2007, basing the name on the Egyptian deity Osiris, and the tale of his son Horus.

Many religions, cultures, and stories attribute power to the number three. In Egyptian mythology, it symbolizes plurality, and “triads” of deities comprise a complete system. It’s no surprise that the god Osiris was born to one such triad alongside siblings Horus and Isis. It’s also not a coincidence that Chicago heavy metal quintet Born Of Osiris found a similar significance within that number on their fifth full-length album, Soul Sphere [Sumerian Records]. In fact, over the course of 12 tracks, the record examines three tiers originally uncovered in a dream that Joe Buras [clean vocals, synthesizers, keyboards] shared.

“The whole story of the record involves three levels,” explains Joe. “The first one is The Binding. You’re hanging, and you’re stagnant. The second is The Fight. You were hanging, but now you’re pulling away from this linchpin, whether it’s physical, emotional, or spiritual. The final is The Release. You break away and feel free, connected, and loved.”

In order to properly explore the “tiers,” the group—Joe, Ronnie Canizaro [vocals], Cameron Losch [drums], David Da Rocha [bass], and Lee McKinney [guitar]—strengthened their bond exponentially. Since 2007, these five individuals have played countless shows alongside everybody from Judas Priest and Rob Zombie to Bring Me The Horizon and Killswitch Engage in addition to festivals such as Warped Tour, Mayhem Festival, and Music As A Weapon. After each album since their debut landed in the Top 100, including fan favorites A Higher Place [2009] and The Discovery [2011], 2013’s Tomorrow We Die Δlive earned the band their highest Billboard Top 200 debut, reaching #27 and selling over 13,000 copies first-week. After another marathon of touring, the guys headed to Michigan to write what would become Soul Sphere. They then hit the studio with Nick Sampson recording drums and added keys and effects, Lee handling production for guitars and bass, and Allen Hassler for vocals. They managed to click like never before, by drawing on nearly a decade of Born of Osiris.

“Over the years, you get better at creating, writing, and recording in the studio,” says Ronnie. “You improve each time you make an album. Once we had the direction, it started gelling.” Born Of Osiris preceded the album with the fiery chant of “Throw Me In The Jungle,” showcasing their anthemic side. The follow-up “Resilience” evinced another angle. It gnashing polyrhythmic guitars collide with orchestral electronics and a forceful and fiery refrain, tapping into the band’s hallmarks while fortifying the attack. “We wanted to use that title for so long,” Joe goes on. “Collectively, we’ve had so much resilience, going through different friendships and changes over the years but still maintaining our connection amongst us.”Then there’s “Illuminate,” which tempers a wall of distortion with a big chorus. The third single “Goddess of the Dawn” snaps from a thick groove punctuated by pinch harmonics before an entrancing clean hook. “We talk about feeling lost, finding yourself, and opening up to love,” says Joe. “It’s all three tiers in one song. As far as the title goes, the Native Americans referred to Aurora Borealis as ‘Goddess of the Dawn’ before they knew what it was. Many cultures and religions would actually worship it.”

Soul Sphere could only by conjured by a group of musicians so personally distinct. Beyond Born Of Osiris, each member continues to enrich his own sphere. In addition to being a partnered Twitch gamer and streamer, Lee is involved in multiple music projects, spanning electronic dance music and progressive rock. His solo guitar project landed in the Top 10 of the Rock Chart alongside System of a Down and Black Sabbath. David runs his own jewelry line D A V I and remains an avid fisherman. Cameron splits his time between drum lessons and composition. Joe oversees and designs the band’s stage production, aesthetic, and lighting, and Ronnie envisions the sweeping sci-fi concepts inside the lyrics and inspiring the artwork. “This group is five best friends together,” adds Ronnie. “We’re all different, and that makes something cool. Not every band has the closeness we do.

We’ve all known each other since high school.”

Ultimately, Born Of Osiris relay a crucial message here, together. “I hope people feel creative and want to make their own art after hearing this,” Joe leaves off. “It might get them off their couches and off their phones to really dive into something and challenge themselves.”

STW is a Metal/Hardcore/Thrash/Pinoy Folk/Traditional Nordic Hip Hop/SIOMAICORE band based in Hong Kong with members from HK, Philippines and Finland. 2005 was a significant year for the band. We made a decision to change our name to Shepherds the Weak (STW). It was an easy transition as most of our songs were becoming heavier as we progressed. We decided that our original name (which I won’t mention for fear of being mocked mercilessly) would not adequately represent our new material. At the same time, we recruited our friend Danilo Cosio “I know how to ride a motorcycle” Gabuya (a.k.a. JR) as a 2nd guitarist to help “fatten up” our sound.

Within the same year we also recorded and released our first EP, “Strength in Numbers”. We still reluctantly play two songs from that album, so if you catch us live don’t request ‘Betrayal’ or any other crap from that album (except ‘False Idols’)... we can’t remember how to play them anymore.

The past five years have been filled with many highs and lows for STW. Through ‘Start From Scratch,’ a production group we formed with our good friends in King Ly Chee, we were fortunate to meet and play alongside some of the bands we listen to. We opened for bands such as Parkway Drive, Misery Signals, Terror, First Blood, Shai Hulud, and Comeback Kid, as well as Napalm Death (Asian Tour, Shenzen) and Shadows Fall (2009, Pulp Summer Slam).

STW has also helped bring some Filipino bands to Hong Kong, including our good friends Badburn, Piledriver, Intolerant, Typecast and Skychurch. We have plans to sponsor more shows in the future.

In 2010 our line up changed for the first time. Due to work and life commitments, Mushie and JR had to bow out; they were replaced by our new members Tommi “I like Foo

Fighters way too much” Svinhufvud and Bryant “I’m the king of logistics” Vallejo.