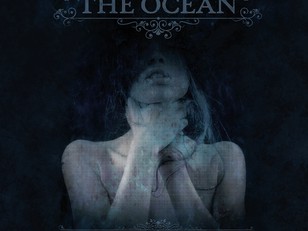 The Ocean’s past two years of existence have been some of the most exhilarating in their eleven year history. The band completed tours in North America and Europe, as is common for many bands, but they added Russia, including Siberia, as well as China, Hong Kong, Southeast Asia, and Australia to the collage of stamps in their passports. Opeth, Dillinger Escape Plan, Between The Buried and Me and Devin Townsend are only some of the bands that The Ocean have supported on tour during their campaign to promote Heliocentric and Anthropocentric. The band’s tireless efforts have afforded them one of the most truly worldwide fan bases in heavy music.

Now, after returning to Berlin, Switzerland (an oft-used inside joking, pointing out the member’s origins), The Ocean have resurfaced with what could be their deepest and most trailblazing piece of work to date, Pelagial: a progressive musical journey, written, recorded, mixed and to-be-performed-live as one single 53-minutes piece of music. Mixed and mastered by Jens Bogren (Opeth, Katatonia, Witchcraft) at Fascination Street Studios in Örebrö, Sweden, Pelagial is set to be released on April 26th / 29th (Europe) & April 30th (North America / world) through Metal Blade Records.

The concept of the album is made evident in its title, Pelagial. Listeners will be further submersed as they journey with the band, beginning at the surface of the ocean and plunging through all five pelagic depth zones: epipelagic, mesopelagic, bathyalpelagic, abyssopelagic, and hadopelagic. In synch with diminishing light and increasing pressure as one dives or sinks deeper into the ocean, the album begins rather light and progressively gets heavier and slows as the band reaches the unfathomable depths of the hadopelagic zone, characterized by complete darkness and a thousandfold increased pressure as compared to surface level. What is amazing about Pelagial is that this is not some detached conceptual idea; this can actually be heard and felt while listening to the album.

Pelagial is one continuous piece of music. The tracks, or episodes, are connected by interludes of underwater sounds and samples taken from old submarine movies, which give the album a claustrophobic "Das Boot"-kind of atmosphere. "There are track marks, and there are actual songs built into this larger structure, but the whole album is a journey rather than a number of loose tracks… some riffs appear in the first 2 minutes of the album and then reappear 30 minutes later", comments Staps. It’s an experience that will reward repeated listens.

"My original plan was to write a stepless musical progression, like a continuous colour blending from white to black, says Staps, "but I soon realized that it could not be that linear. It needed to stay interesting after all, and this is something that is usually best achieved by employing unforeseeable elements. In the end, any good idea must be put into perspective by its musical impact." And so the listener will experience swirls and vertical currents while listening to the album; short, unexpected faster passages in between, sudden tempo changes that will make them feel like they’re rising again for a short bit - but the general direction remains very clear: "You can feel from the beginning, it’s going down. Deeper and deeper."

This continuous downward movement is also reflected in the album’s sound: starting with a clean, produced "surface"-sound and progressing towards a more open, ambient, distorted and abrasive sound for the doomy depth-passages at the end of the album. To make that happen, Jens Bogren had to face the challenge of mix the album in one go, which resulted in the epic amount of 288 audio tracks!

Originally conceptualized as an instrumental album, Pelagial now comes in 2 different versions that will be released together: with vocals and instrumental.

In early 2012, vocalist Loïc Rossetti has been facing severe health problems due to the band’s relentless touring activities and needed a break. Furthermore, the album concept, at first glance, did not really seem fit for vocals: "we obviously did not want to sing about battles between sperm whales and giant squids", comments Staps. But Rossetti recovered during 2012 and the decision was made to have him on the album. "Loïc is the frontman of this band and we all felt that The Ocean and this album needed him", says guitarist Jonathan Nido, "and though we were all quite used to the instrumentals, I’m glad we decided to record vocals in the end, because it really adds a new dimension to the album that was not there before".

Analogous to the journey from the surface into the depths of the sea, the album’s lyrics take the listener on a journey into the abysses of the human mind.Much like the protagonists in Andrey Tarkovsky’s movie "Stalker", Pelagial is a psychological journey through different zones, towards our own inner self and subconscious… "towards the essence and origins of our desires, wishes, dreams, and all the fucked up attributes inside of our own inner selves that generate and shape them," says Staps.

In the movie, three men are travelling towards the heart of a zone at the center of which one’s wishes are said to come true. But the closer they get, the more insecure they become with regards to what they should actually wish for, and fear arises that even those wishes which they have no control over, which they may not even be aware of, might come true. The protagonists are confronted with their own nature, the true essence of their characters, and this essentially leads them to their own demise. This topic is the lyrical backbone of Pelagial. "There’s a lot of Freud-references in the song titles and lyrics, but a lot of the lyrics are very personal, and in that completely different from the -centric albums", comments Staps.

Pelagial comes in a 10-panel digipak with epic artwork by Seldon Hunt. A special acrylic boxset edition of the album will be released through the band’s own Pelagic Records, on both CD and 4×10" vinyl formats. These special acrylic boxes will contain the CD digipak or the 2 vinyl gatefolds respectively; which will be "buried" underneath 5 thick acrylic layers coloured in different hues of transparent blue, reflecting the individual pelagic depth zones. These acrylic layers will be silk-screen printed by hand with artwork by Martin Kvamme in April. The boxsets will also come with an extra DVD featuring a 5:1 dolby surround mix of the instrumental album, and the Pelagial movie by Craig Murray (Nine Inch Nails, Converge), which the band will also show as live video projections during their shows. This movie, which is the meticulous work of shooting, cutting and editing for a whole year, visualizes the journey into the depths and is completes the holistic music and visual art project that is Pelagial.
聯絡主辦團體
查看主辦方其他活動