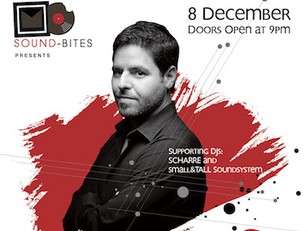 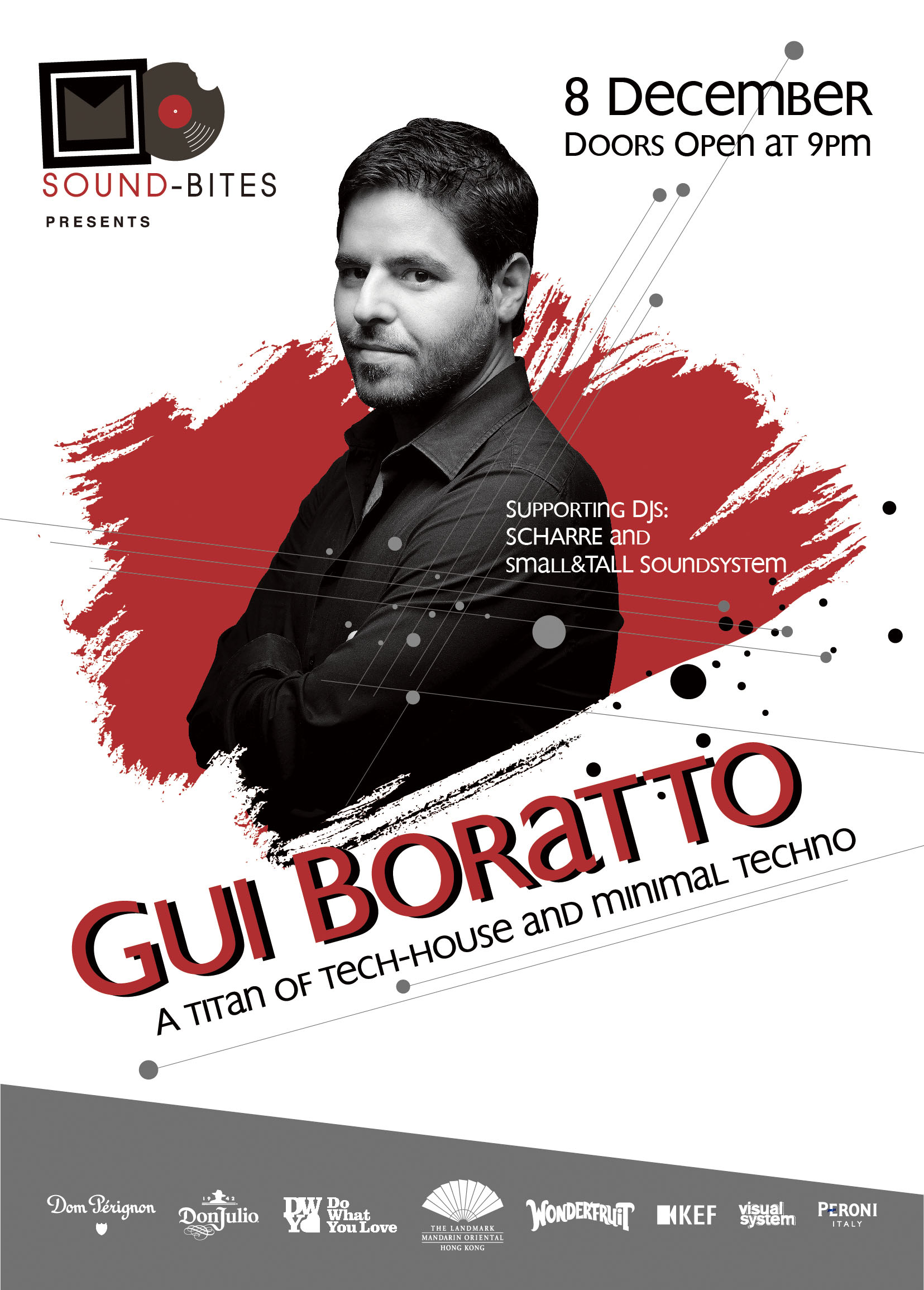 Gui Boratto, an electronic music producer, is the talent behind some of the genres’ finest albums in recent memory. From Chromophobia and Take My Breath Away to III and The K2 Chapter, all released on the revered Cologne-based label Kompakt.  Gui Boratto is consistently one of the most interesting electronic music producers.  On stage, Gui uses a laptop equipped with Ableton Live, a JazzMutant Lemur, a monome and an Akai APC40.

Now, with four full-length albums under his belt, guests attending the event can expect remixes and productions for Massive Attack, Bomb The Bass, Pet Shop Boys, Goldfrapp, Moby, amongst others, Gui Boratto is launching his own music label: D.O.C., distributed by Gui's mother label Kompakt, a platform which intends to put out timeless music.  Most recently, his remix work is showcased in London Grammar release of new single ‘Big Picture’.

The exciting evening will be supported by SCHARRE/KOMPAKT, Tokyo, and small&TALL soundsystem, who will weave together tracks, loops and effects to create a unique, hypnotic, multilayered, deep and groove-based house-meets-techno sound.

MO SOUND-BITES electronic music series is another music concept pioneered by The Landmark Mandarin Oriental kicked off in March 2017 where Autograf from Chicago was invited.  The second MO Sound-Bites saw Com Truise from New York while the third one with Alex Metric took place last Friday 10 November. On its fourth series of the year, MO Sound-Bites presents Gui Boratto on 8 December 2017.  Doors open at 9pm. Early bird Tickets on sale now at Ticketflap at HKD275 per person.  Regular tickets at HKD300 per person.  Tables for four are available on limited basis at HKD2,500 including four tickets.  Listen at www.mosoundbites.com. For enquiries please contact MO Bar at +852 2132 0077 or lmhkg-mobar@mohg.com

Born in 1974 in São Paulo Brazil, Gui Boratto, architect, musician, composer and producer initiated his career in the advertising sector in 1993. From 1994 until 2004 he performed various works for countless record labels both national and international, such as EMI, Virgin, Irma, BMG, Edel, Vidisco, ZYX, among others.

Gui Boratto is A&R and one of the owners, with his partner and brother Tchorta, of the Brazilian independent label, Megamusic, distributed by Trama.

From 2005 he began to dedicate himself to his own productions and compositions, displaying to the public an authoral and more personalized side to his abilities. With countless licenses with respected European labels, such as Plastic City, Circle, Kompakt, Audiomatique, among others, Gui Boratto has managed to appear in the chart and playlists of people like Michael Mayer, Tiefschwarz, Steve Bug, Phonique, Martin Landsky, Hernan Cattaneo, among others.

About Us and Our Partners

Jason has over 18 years of entrepreneurial experience in the electronic music space, during which he has worn many hats: DJ, promoter, talent buyer, booker, booking agent, club owner, curator, festival producer and creative director. Founder of marketing agency, Do What You Love, he has influenced the electronic music world in both America and Asia. Jason is best known for his role as co-founder and creative director of Further Future, a technology lifestyle driven festival, and Wonderfruit, Asia’s first family-friendly sustainable lifestyle festival, and was responsible for bringing Ultra Music Festival to Macau/Hong Kong and Manila.

Visual System (VS) is a collective of artists from various disciplines (image, sound, plastic arts, programming, design, architecture), created in 2007. Positioned at the frontiers of art and design, they draw their creative inspirations from cinema and architecture. Their world-renowned sound and light projects are guided by a vision of the media in the city of tomorrow. By playing with new technologies, VS uses light and sound as a spatial and spectral tool.

KEF
KEF was founded in 1961 by ex-BBC electrical engineers, Raymond Cooke OBE (1925 - 1995). Keen to experiment with new materials and technologies, he created sound equipment with superior acoustic quality able to reproduce recordings as natural as the original performance. From the very beginning, the pioneering inventiveness of KEF was undeniable, and audiophiles around the world continue to revere the company for its innovative, high-performance loudspeakers.

Celebrated in exclusive cocktail bars, restaurants and nightclubs, the iconic Don Julio 1942®Tequila is the choice of connoisseurs around the globe. Produced in small batches and aged for a minimum of two and a half years, Don Julio 1942® Tequila is handcrafted in tribute to the year that Don Julio González began his tequila-making journey.

Dom Pérignon’s commitment to vintages is absolute. Each bottle of Dom Pérignon is a true act of creation, made from only the best grapes. The champagne’s intensity is based on precision, so inviting, so mysterious. Each Vintage has three Plénitudes, and embodies a complete faith in the Power of Creation that Chef de Cave, Richard Geoffroy, has never failed to renew. Coupled with a bold sense of playfulness, Dom Pérignon inspires the greatest creators in the world.

Mandarin Oriental Hotel Group is the award-winning owner and operator of some of the world’s most luxurious hotels, resorts and residences. Having grown from its Asian roots into a global brand, the Group now operates 29 hotels and eight residences in 19 countries and territories, with each property reflecting the Group’s oriental heritage and unique sense of place. Mandarin Oriental has a strong pipeline of hotels and residences under development, with the next hotel opening planned in Doha.  Mandarin Oriental is a member of the Jardine Matheson Group.