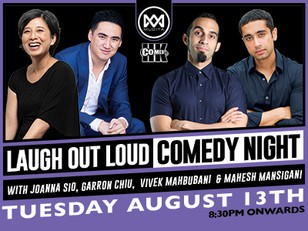 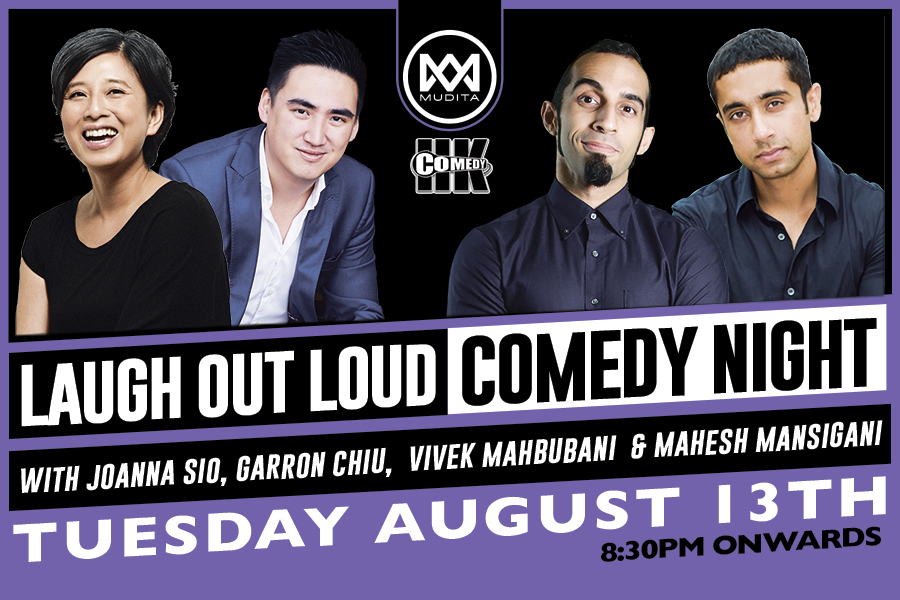 Mudita x Comedy HK presents Laugh Out Loud V with best of the best comedians in Hong Kong featuring Garron Chiu, Vivek Mahbubani, Mahesh Mansigani and for the first time on Laugh Out Loud, the ever so hilarious female comic Joanna Sio!

Joanna Sio is an improviser and a stand-up comedian from Hong Kong.

She was invited to perform in the Melbourne International Comedy Festival 2015, the first troupe of 'Comedy Zone Asia' and represented Hong Kong to compete in Laugh Factory's Funniest Person in the World Competition in 2016. She is a feature comedian in Comedy Central Asia.

Garron is an American-born standup comedian based in Hong Kong.

On stage, you will find him trying to justify his ego, talk about his myriad of doomed relationships (and his current successful one), and try to figure out whether he is too Asian or not Asian enough. All this while failing to run from his stereotypes and making people laugh along the way.

Vivek Mahbubani is a full-time Hong Kong-bred bilingual stand up comedian. He is the only person to ever win the Hong Kong International Comedy Competition in both Cantonese (2007) and English (2008). Vivek has had the opportunity to take his humour all over Asia-Pacific, including Hong Kong, China, Macau, Singapore, Malaysia, Manila, Bangkok, Sri Lanka, India and Australia.

When Vivek isn't travelling the world doing gigs on land and on ships, he spends time developing the Cantonese comedy scene in Hong Kong, leading a group called Hall of Laughs.

Performing has always been one of Mahesh’s favourite hobbies, and he took part in and presented many shows in school and at university. Post university Mahesh continued taking part in amateur productions and played the lead role in the 2005 Play ‘A very Sindhi wedding’ in his home town of London.

Since beginning his standup odyssey in 2009, Mahesh now delivers a one-two knockout punch every time he takes the stage. A multi-time Hong Kong Comedy Competition, he performs all over Asia as well as produces the highly touted Ding Ding Comedy