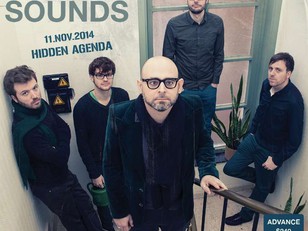 Bio:
A record where every track finds its home in a different place, an endless list of favourable reviews, and two songs (‘The Time To Sleep’, ‘Good Occasions’) which together have already been seen over four million times on YouTube. In all its bittersweet beauty and melancholic simplicity, Marble Sounds announce the eagerly awaited arrival of ’Dear Me, Look Up’, the follow-up to the debut album ‘Nice Is Good’.

Like a thrilling novel on an audio trip to stir up your emotions, ’Dear Me, Look Up’ creates a deep and intense experience, blending lyrics that you make ponder with soundscapes that turn you upside down, before gently putting everything back into place.

Marble Sounds is the brainchild of Pieter Van Dessel, singer-songwriter and rising talent in Belgian popmusic. With Van Dessel masterminding the contoured strokes of the melodies and arrangements, guitarist Gianni Marzo (Isbells), bassist Frederik Bastiaensen and drummer Johan De Coster add in layers of colour. As recording progressed, pianist Brecht Plasschaert (Winterslag, Manhog) joined them to give an additional twist. “Marble Sounds will always be my baby, but it’s important for the chemistry within the group that every band member finds their own way in the songs before we start recording them”, says Van Dessel.

Keeping faith with their indie pop roots, the new album cleverly teases its way through delicate and sometimes fragile tones, yet also manages to organically fold in guitars and pianos, drizzled with the occasional horn and trumpet. ‘Dear Me, Look Up’ was recorded in ten different places, from the STUK art centre in Leuven to Van Dessel’s own home studio. And once again, producer Peter Crosbie took charge of the mixing. “I have written songs that weren’t ready to be launched three years ago, leaving the whole record sounding more intimate”, continues Van Dessel. You can hear Aino Vehmasto (I Am Oak, Secret Love Parade) in ‘Leave A Light On’, and in ‘Evenings’. Chantal Acda (True Bypass, Isbells) sneaks into ‘No One Ever Gave Us The Right’.

Nevertheless, Van Dessel still uses familiar sounds from the debut. Think of the skipping ‘The Summer Of TheSun’ (including the banjo riff Gianni Marzo), or ‘Never Lost, Never Won’, the song that introduced the two-year writing process. “In the beginning I was afraid of repeating ourselves, so I tried another approach. However, at the end, I picked a sound that’s closest to my heart”, he continues.

Marble Sounds used to revert to atypical song structures (‘Sky High’), while here Van Dessel prefers conventional songs. In that way ‘Dance Clarence Dance’ (a wink at ‘Love Happened’ from Evil Superstars) is catchy indie that outwits Death Cab For Cutie, whilst the power of emptiness dominates in both the Sophia cover ‘Ship In The Sand’ and the ambient ‘The Silent Song’

‘Dear Me, Look Up’ is a grand and captivating continuation of Marble Sounds musical journey. Managing to combine a defining moment like ‘High Violet’ for The National with the eye for detail of Sparklehorse, Marble Sounds have done more than pull off an impressive musical trick. As the well-established BBC DJ Steve Lamacq described Marble Sounds, the new album typifies what we have come to expect from the band: “So clean sounding but then again so sensitive and emotional at the same time."

Anyone who didn’t get their hands on the first Marble Sounds release three years ago will go overboard for ‘Dear Me, Look Up’. It will be available online and in all good record stores on March 25th by Zealrecords.
聯絡主辦團體
查看主辦方其他活動