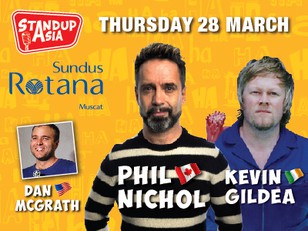 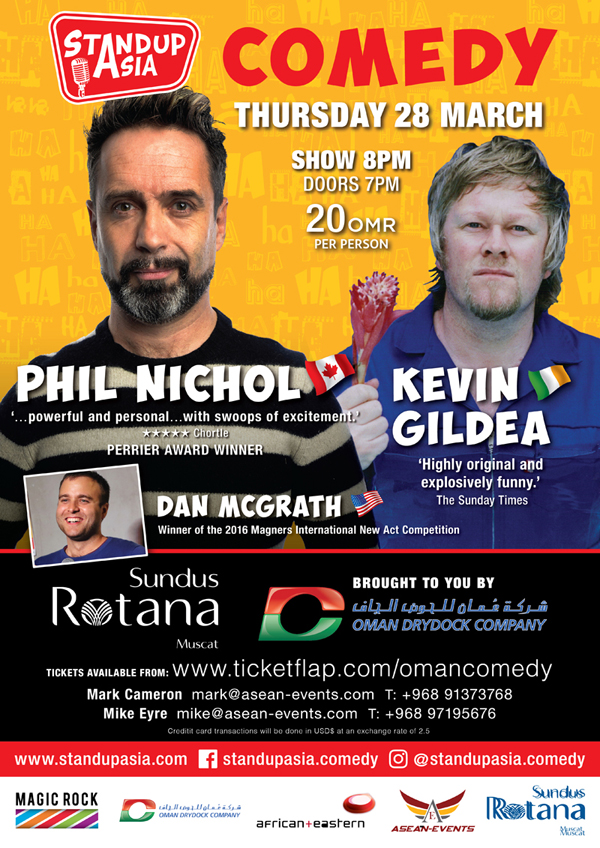 with KEVIN GILDEA and DAN McGRATH

‘Wildly human, wildly hopeful, Phil Nichol is not just comedy, but soul-quenching storytelling at its finest.’

‘…powerful and personal…with swoops of excitement’

PHIL NICHOL, Perrier Award Winner, is an energetic and exciting performer with an unquenchable thirst to break boundaries and innovate with his multi-faceted talents as an award-winning comedian, critically-acclaimed actor, producer, presenter, writer, and musician.  His skill as an improviser goes unparalleled by anyone.  With a surreal edge to his mischievous rantings, NICHOL always brings something new to the stage.  His keen sense of fun and eye for the shocking and absurd has cemented his position as one of the best comedians on the circuit today – shown clearly by his record-setting six nominations for the Chortle Awards - Best Headliner/Club Comic.  NICHOL’s 20th visit to the Edinburgh Fringe Festival was marked in 2016, where he made the Telegraph’s list of the best jokes of the festival.  NICHOL promises to give you a performance that you’ll never forget, putting you through a ‘rollercoaster ride of black comedy gold’ (The List).  Don’t miss this masterful, mind-blowing, ‘seismically powerful award-winning comic force’ (The Scotsman) at the Sundus Rotana this March.

KEVIN GILDEA is one of the most important figures in Irish comedy, having been in the pioneering sketch group Mr Trellis with Barry Murphy and Ardal O’Hanlon, with whom he also co-founded The Comedy Cellar, Dublin’s longest-running comedy club.  GILDEA has performed stand-up comedy all over the world, from Shanghai to Dubai, from Kansas to Rome, from London to Cavan.  He is invited regularly to play all the major Irish comedy festivals and his Edinburgh Fringe Festival shows regularly achieve critical acclaim and sell-out runs.  GILDEA played Father Cave in Father Ted and has written for Alexei Sayle, along with being a regular writer and performer on RTE TV’s satirical sketch show, Irish Pictorial Weekly, and BBC TV & Radio.  His short film, No!  No! No!, was shortlisted for an IFTA.  GILDEA’s mild manner and quirky absurdist viewpoint and ruminations create what The Sunday Times called “highly original and explosively funny.”  Don’t miss this brilliant comedic mind on stage in Muscat.

Do not miss PHIL NICHOL (CAN) with special guest KEVIN GILDEA (IRL) and host DAN McGRATH (USA) this March.  Tickets are on sale now for 20 OMR per person.  Get your tickets today on TicketFlap: www.ticketflap.com/omancomedy